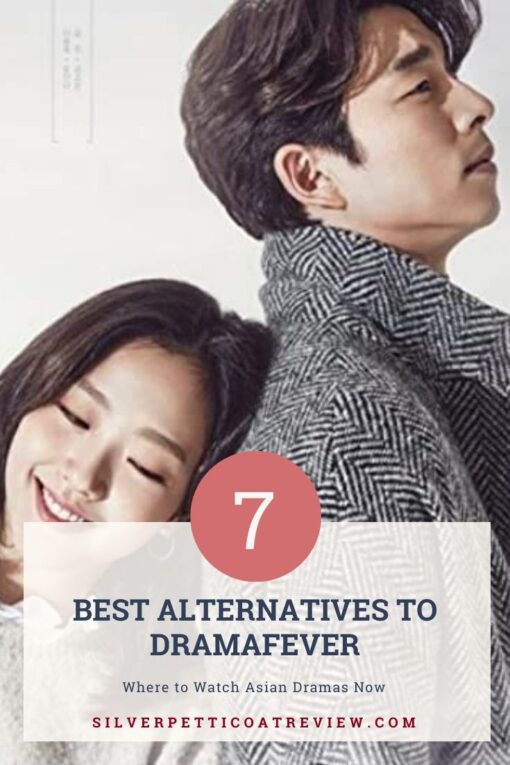 Here is a list of the best streaming sites (and Dramafever alternatives) to watch Korean Dramas, Chinese Dramas, and more.

On October 16, 2018, Dramafever permanently shut down. Here at The Silver Petticoat Review, we loved discussing some of the great romances and period dramas exclusive to Dramafever, so we deeply feel the loss of this much-needed streaming service.

Now, we’re aware that we introduced some of you to Asian TV dramas on Silver Petticoat from the many messages we’ve received over the years. So, we felt it was best to address this unfortunate casualty. We’re also aware that Dramafever (due to its ease of use) became the leading site for many of you to get their Kdrama fix!

We also feel the closing of Dramafever is a real loss to niche streaming. And after the closure of the classic film streaming service, Film Struck, we hope this is not a trend that continues.

But let’s not despair! Plenty of other alternatives to Dramafever still exist. So, that way, you’ll be able to keep watching the Kdramas and other Asian dramas you love. We’ve put together a list of the best alternatives!

Note: We’re only recommending legal options, so these are safe sites to watch Asian dramas. Unfortunately, DramaCool is not legal, for example.

The Best Alternatives to Dramafever

Viki is perhaps the best alternative to Dramafever with over a thousand titles to choose from with a variety of genres. Whether you’re in the mood for a Korean drama, a Chinese series, or even a show from Taiwan or Japan, there is fabulous content from every possible genre. And they are always adding new shows and movies.

The service is free, though premium services range from $4.99/month to $9.99/month. You can also add the Viki app to Roku devices (Samsung no longer supports the app). However, if you don’t like Viki, keep reading for Viki alternatives.

Recently, Netflix has stepped up its game with exclusive international content. From standout Korean dramas like Black or Mr. Sunshine to memorable Chinese shows like The Rise of Phoenixes, there are fantastic Asian dramas and films on Netflix. I also expect more fabulous content to stream exclusively on Netflix in the future with the closure of sites like Dramafever.

A newer streaming site, Kocowa, is all about the K-drama. You’ll find many exclusive dramas you can’t stream (legally) anywhere else, including My Secret Terrius (available previously on Dramafever)! You can watch for free or pay $6.99/month to watch with no ads.

With the closure of Dramafever, you may have noticed that OnDemandKorea has started to step up its advertising game. While I haven’t personally used this one yet, they do have many great Korean dramas to watch.

Many of the titles include English subtitles, and according to an advertisement I saw, they’re adding more English subtitles soon. There’s a free service, a paid service ($6.99 every 30 days), as well as Pay Per View options.

AsianCrush is a popular choice and includes a large selection of Asian content (Movies & TV) to choose from – though mostly contains movies. You can watch for free or pay $6.99 for the premium version. AsianCrush has millions of fans, so you can’t go wrong with this one!

If you’re a fan of anime and manga, you’ll love Crunchyroll. But if not, there are still some great dramas there. The website focuses mostly on Japanese content. The service costs $6.95/month after the 14-day free trial.

While Hulu doesn’t have as many Asian dramas and films as they’ve had in the past, one can hope they’ll pick up more content again. You can still watch popular Korean shows like The Legend of the Blue Sea, Oh My Venus, and more on this popular streaming site!

You can also find some Asian dramas on Amazon Prime Video, Tubi, MBC Classic (Youtube Channel), as well as other streaming sites in other countries (IE: VIU).

(UPDATE: Rumor has it that the new streaming service, Peacock, will air Korean dramas! So, let’s cross our fingers.)

How do you feel about Dramafever’s closing? What Asian drama streaming service do you use the most now that Dramafever closed? Share your recommendations for where to watch Asian movies and dramas, feelings, and comments below!

12 thoughts on “The Best Alternatives to Dramafever: Where to Watch Asian Dramas Now?”