My Fair Lady (1964): One of the Most Spectacular Musicals of All Time 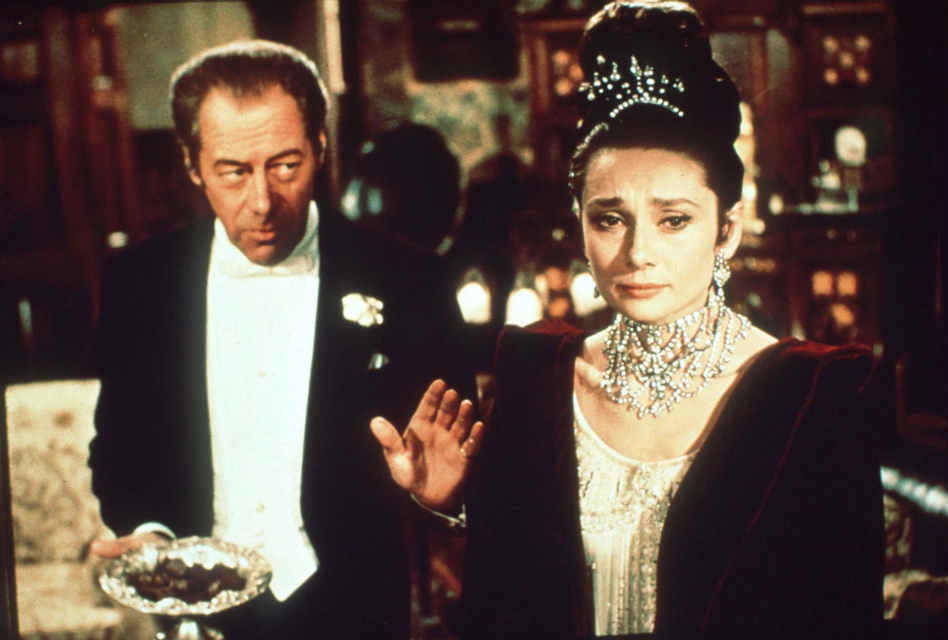 My Fair Lady is my very favorite musical. I’ve seen it countless times on screen and stage. It never fails to entertain and delight me with its’ ageless story.

Based on a story in Greek mythology of a sculptor who wishes to bring his creation to life, Pygmalion has seen several reincarnations on both stage and screen. Perhaps none is so famous as the film adaptation My Fair Lady.

Eliza Doolittle is the poor Cockney flower seller whose life is turned upside down due to the bet of a stranger. Professor and phoneticist Henry Higgins brags to his peer Colonel Hugh Pickering that his skills are such that he can transform the undeserving Eliza into a lady of grace and poise. Eliza dreams of rising above her station and bettering herself. She seizes the opportunity, little realizing how much will be demanded of her. 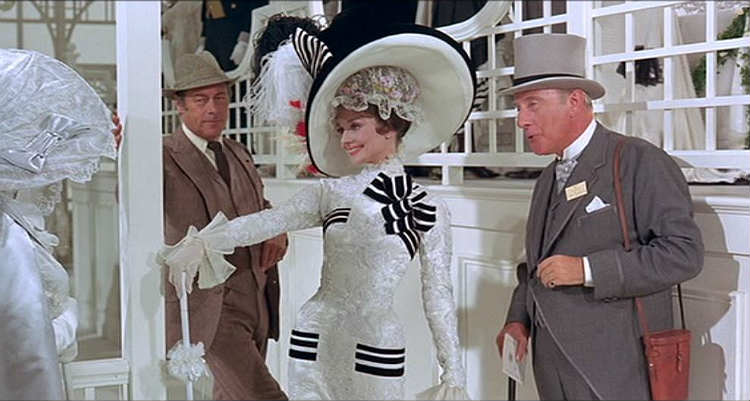 My Fair Lady is a film which remains popular, partly because it contains a message that remains relevant to modern audiences. It also perfectly combines all the elements of a great film into a winning package that continues to attract viewers. The picture was a financial and critical success winning eight Oscars including Best Picture, Best Director, Best Actor, and Best Costume Design. But for me personally, I adore this musical for its’ cast, story, music and costumes.

Rex Harrison and Audrey Hepburn star as Professor Higgins and Eliza Doolittle. They are joined by a veteran cast including Wilfrid Hyde-White as the benevolent Colonel Pickering and Gladys Cooper as Higgins’ mother, both of whom play a vital role in Eliza’s journey of self-discovery. Rounding out the main cast is Stanley Holloway as Eliza’s neer-do-well father and the forgettable Jeremy Brett as Eliza’s admirer.

RELATED: The Art of Us (2017) -Celebrates “Eliza Doolittle Day” With A Contemporary Twist on “My Fair Lady”

Harrison and Holloway were carry-overs from the Broadway production of My Fair Lady and are excellent in their roles as the men who dominate Eliza’s life. Julie Andrews was part of that same stage cast but was passed over in favor of Audrey Hepburn.

Many considered this a controversial casting choice. Hepburn may have not been the perfect choice for Eliza. She’s too regal and naturally elegant to credibly play a poor Cockney working girl. But she ably transmits Eliza’s cacophony of emotions as she learns to navigate the massive changes and demands of her new life. And I defy anyone to choose a better actress to play the transformed Eliza. 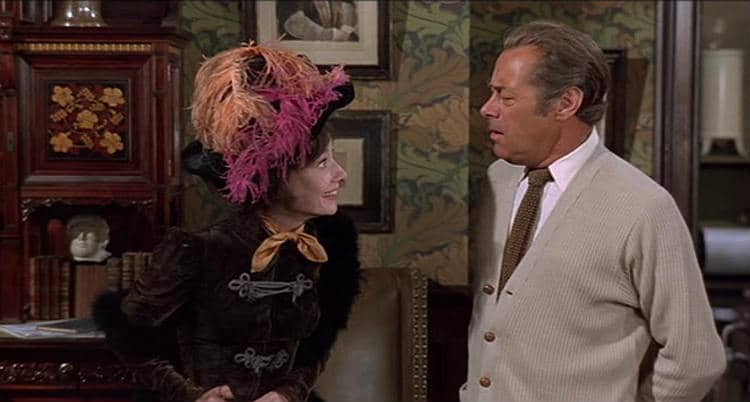 One of the things that makes this story so timeless, is Eliza’s quest for identity and independence. This is a desire everyone can relate to. Though the Professor may just be tutoring Eliza to win a bet, for her it’s a rare opportunity to change her life. Prior to this, she has been defined and restrained by her station in life. It’s her burning need for freedom which motivates her to continue her speech lessons with Professor Higgins.

She pushes forward despite everyone, including her father who views her as a nuisance if not completely useless. Eliza endures Higgins patronizing attitude, high handed demands and snobbish impatience with fortitude knowing that the end result will be worth her suffering. If no one truly values her, she values herself.

This is in stark contrast to her father’s own experiences. However, after a random conversation with Professor Higgins, Alfred P Doolittle also sees his life unexpectedly transformed. Higgins recommends Doolittle as a lecturer even though Doolittle has always been lazy and selfish preferring to live off the work of others. Moreover, he’s also a little too fond of the bottle and refuses to marry the mother of his children.

Suddenly, he finds himself a man of respect and money. But instead of bringing him freedom, Doolittle finds himself entrapped in a life that requires him to live up to his new reputation. For both Eliza and her father, respect and an honest job are the keys to their prisons. Ironically, for Eliza, the keys set her free, but for her father they cage him.

I name My Fair Lady as my favorite musical, not just for its’ inspiring story, but also because of its’ music. What I most appreciate about the lyrics is how witty, clever and at times utterly satirical they are. But those same words matched with the music are absolutely unforgettable. The original play, Pygmalion had long been considered nearly impossible to adapt to music. (1) Even the great team of Rogers and Hammerstein found it too difficult.

However, Alan Lerner and Frederick Lowe not only succeeded but did so brilliantly. They used the songs to not only progress the storyline but also to display the character’s more private thoughts and emotions not expressed in the dialogue. 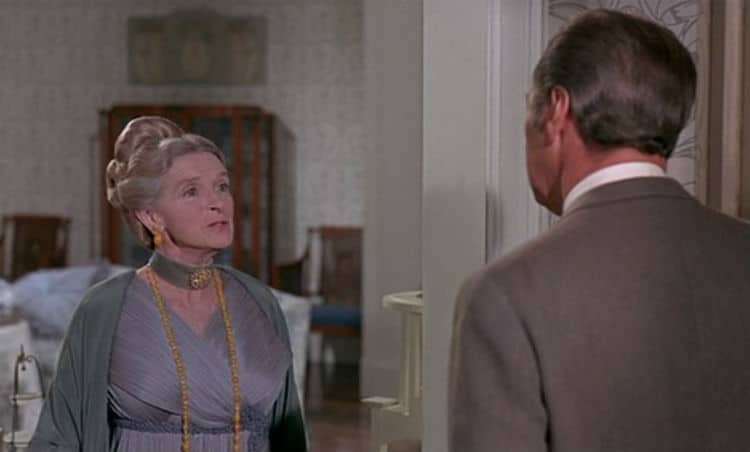 I never grow tired of singing along with my film soundtrack. Higgins opening number Why Can’t the English is a perfect introduction to his self-absorbed character who is passionate about the English language. But I also find his solo I’m An Ordinary Man a revealing look at his obtuse arrogance and pride.

RELATED | How To Steal A Million Review

This is only matched by Alfred Doolittle singing about his selfish but happy lifestyle in Just A Little Bit of Luck. Then, of course, there is the self-congratulatory You Did It, where Higgins takes all the credit for Eliza’s transformation utterly forgetting her own hard work.  These songs are presented in such a way that the viewer finds them humorous despite the distasteful sentiments they contain.

But it’s Eliza’s anthems which always leave me inspired. She begins the film singing about her dreams for life in Wouldn’t It Be Loverly?. Then she displays her anger at the injustice of Higgins treatment of her. In Just You Wait she dreams of ways to kill him. Her personal growth is on full display when she demands her admirer to Show Me, saying she is sick of words and wants action.

Finally, her transformation is complete when she stands up to Professor Higgins in Without You. Here Eliza declares her independence declaring she no longer needs Higgins. Of course, there are many other great songs in this movie, but these are my personal favorites.

The other reason I adore My Fair Lady is the amazing costumes. The white lace dress with the black and white ribbon trim and enormous matching hat Eliza wears to the Ascot races is my all time favorite film costume. It’s extravagant and memorable. This ensemble is immediately recognizable even by those who have never seen the film. I also love her white beaded evening gown with the red velvet cape which she wears to the embassy ball. Unlike the lace gown, it’s a dress which is timeless and could be worn to an event today. 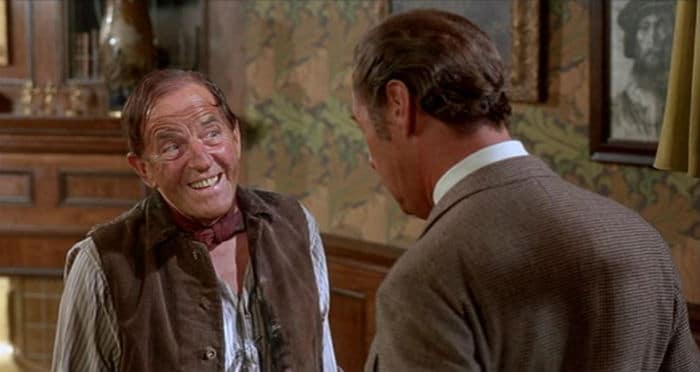 Of course, it’s Eliza’s wardrobe which always receives the most attention. But costume designer Cecil Beaton actually designed over one thousand costumes for the movie for which he won an Oscar. This is impressive as Beaton only worked on thirteen films. His main career was as a photographer. He once served as the official photographer to the Court of St. James, taking pictures of the British Royal Family. (2)

For all these reasons, I find My Fair Lady a film musical I never tire of. It takes great skill to combine and balance so many essential elements into a great film. And it takes a special infusion of heart to create a film which entertains and inspires all who watch it. This is why My Fair Lady is a film that continues to resonate with a new generation of viewers. It’s definitely an essential movie which I cannot recommend highly enough.

Where to Watch: Unfortunately, it’s currently only available on DVD, but is well worth the purchase price.

Do you have a favorite musical? What is your favorite thing about My Fair Lady?