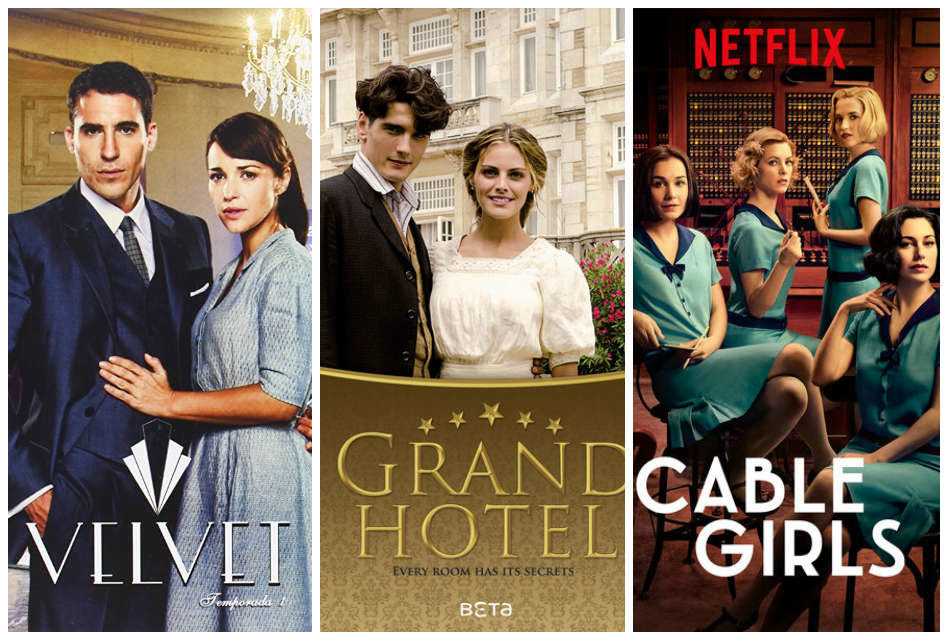 As we come to the last day of National Hispanic Heritage Month, there is one last list to explore. The Spanish period drama. Netflix offers a plethora of Spanish programming. From gritty, dark dramas to light-hearted, romantic comedies, there are a number of shows to appeal to everyone. In particular, if you are looking for a romantic Spanish period drama, look no further! Netflix has a number to satisfy your romantic “tooth!”

To help you start a new obsession (hey, what are friends for?), below is a list of my favorite Spanish period dramas available on Netflix. Fans of Downton Abbey, Timeless, and Atonement are sure to enjoy these series. I do highly recommend watching these shows in their original language with subtitles. Finding time in our busy schedules to watch programming with subtitles is hard. However, hearing the words as originally meant to be spoken adds to the experience. You will not regret it, I promise!

First, before we dive in, a warning about content. The Spanish rating system is less restrictive than American television. Therefore, many of these shows do have a rating of TV-MA or TV-14. Much of this is due to war violence, some profanity, and brief nudity. However, the content is not gratuitous or for shock value. Last, a link to any reviews on our site is also found below.

Without further ado, here are seven Spanish period dramas you are sure to love! When you’re done binging these, check out the rest of Netflix’s offerings. There are plenty more to choose from!

Fans of Downton Abbey will adore this Spanish period drama. It has drama, intrigue, and romance! Oh, did I mention romance?? Swoon-worthy romance of the highest caliber! The series follows a young man named Julio. He gets a job as a footman at a hotel to investigate his sister’s disappearance. There, he meets Alicia, the owner’s daughter. Together, they work to uncover the mystery. However, as it happens, they also fall in love. A wonderfully told old-fashioned romance, prepare to watch this series more than once! Oh, and did I mention how dreamy the lead is???

If you love a story of family and star-crossed lovers, this is the series for you. Velvet is a sumptuous Spanish period drama that is deeply romantic. It tells the story of the heir to a fashion house who falls in love with a seamstress. Naturally, the family objects and separates them. Years later, they reunite, setting off an explosive chain of events. Set In 1950s Spain, the sets are beautiful and the costumes are absolutely gorgeous!

This sexy Spanish period drama follows the lives of four women brought together by their job as telephone operators in 1928 Spain. Filled with romance and secrets, Las Chicas Del Cable explores what it means to be an independent woman during the roaring 20s. Think a tamer Sex and the City meets The Great Gatsby. Swoon! Read our review of Las Chicas del Cable here.

Another Spanish period drama set during the late 1920s, this series features stunning cinematography and costumes. Queen Victoria Eugenie sends a group of nurses from the Spanish Red Cross to Melilla to establish a hospital. The task falls to the Duchess of Victoria. She leads a group of women who, despite the ravages of war, still find time for romance. For more, see our review here.

This sweeping epic is an amazing Spanish period drama. Set in 15th century Barcelona, La Catedral del Mar tells the story of Arnau, the son of a fugitive serf, whose rise to the noble class brings suspicion from the Inquisition. Moreover, this series also features star-crossed lovers. Filled with romance and drama, La Catedral del Mar will appeal to fans of Ken Follet’s Pillars of the Earth. This is darker than what The Silver Petticoat Review covers and thus, there is no review of this program on our site.

Content Warning: TV-MA for war violence and some sexuality.

Fans of Timeless will adore the original broadcast of this Spanish period drama. In fact, Timeless was a direct adaptation of this original Spanish drama. The series is about how three people from different eras in time join the modern day Ministry of Time. Their mission is to prevent other time-travelers from manipulating history. With action, humor, and, of course, romance, El Ministerio del Tiempo is an addictive series! All three seasons are available on Netflix! My apologies – I was unable to find a trailer with English subtitles.

#7 El Tiempo Entre Costuras (The Time in Between)

This lavish romantic Spanish period drama follows Sira, a seamstress, who leaves Madrid for love of a man. Soon, she finds herself swept up into a game of espionage as Spain struggles between civil war and its growing relationship with the Axis powers in World War II. Filled with intrigue, romance, and betrayal, El Tiempo Entre Costuras is sure to please fans of Allied, Charlotte Gray, or Shining Through.

Whether you’re new to international dramas, or a longtime fan, these seven Spanish period dramas are addictive! Settle in and prepare to be swept away to another world!

178shares
We use cookies to ensure that we give you the best experience on our website. If you continue to use this site we will assume that you are happy with it.OkNoPrivacy policy