Why You Should be Reading Mary Stewart, the Mid-Century Queen of Romantic Suspense 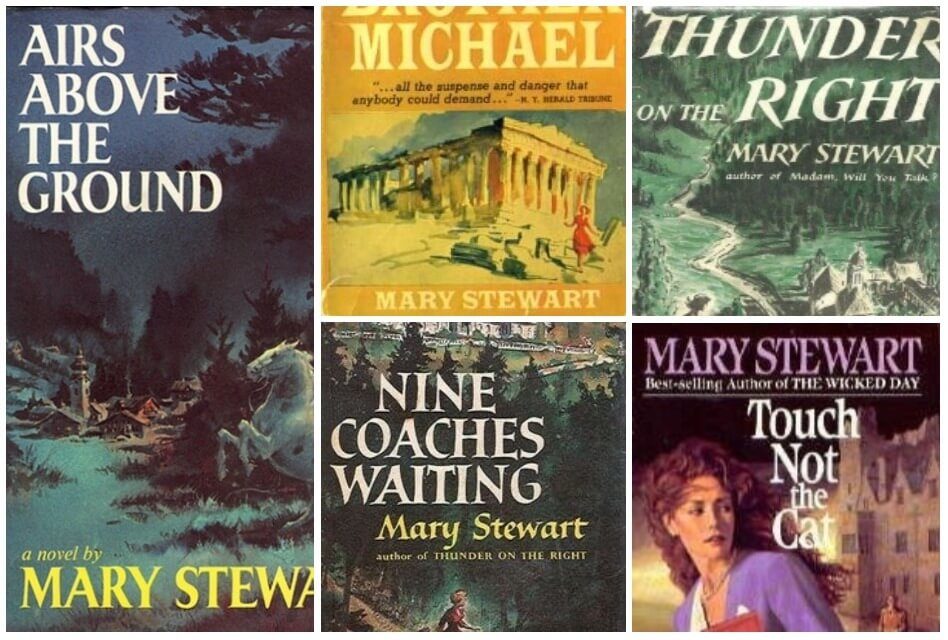 I discovered the authorship of Mary Stewart earlier this year and have been bingeing on her ever since.

Mary Stewart was a bestselling author in her lifetime (1916-2014). Her most productive period was from the fifties to the seventies, where she is often credited as developing the romantic suspense/mystery genre. Indeed, Mary Stewart wrote tales of plucky young women finding themselves in the middle of a mystery. And to solve the mystery, they often need the help of one daring, dashing and darling man. It makes for very entertaining reading.

So, here’s why you should be reading her!

Damsels Not in Distress

Woman-focused, Mary Stewart’s novels center on everyday women thrust into a mystery. The ordinary suddenly finds herself in an extraordinary situation.

So, these are damsels who find themselves in some very distressing situations, but they find the moxie and the gumption to pull up their bootstraps and deal with it. They’re smart, well-read, curious, compassionate, rising to meet the challenges being thrown their way. Whatever self-assurance and confidence they lack in the beginning, is quickly cast aside by the immediacy of the situation and the need to do something.

So, these are not too-silly-to-live damsels in distress, but women trying to do right and put right, utilizing their very capable talents in the process. They’re flawed, likable and lovely – very relatable. They traipse through isolated locales, they ask questions, they think and deduce and intuit. And they end up being rather heroic in the process.

It was the egret, flying out of the lemon-grove, that started it.

First and foremost, Mary Stewart knows how to hook and hook hard from the very first line. Her books start well, piquing curiosity from the get-go and reeling you steadily in. She is a fantastic writer, writing very sensually about places with very evocative descriptions of exotic locales. She also writes with much humor and wit and witty repartee.

Written in the first-person, her romantic suspense books are from the point of view of the heroine, so we often do not know how our heroine looks per se, what the villains are thinking, what the man of interest sees. She just is, doing and being herself – in often somewhat isolated circumstances. It is a limited perspective that leaves so much unknown, building suspense.

Stewart’s tales are also steeped in the numinous, in supernatural, otherworldly legends and myths and folklore. So, while the story is taking place in the present day of the mid-twentieth century, in real life, there are always these elements of the magical, the inexplicable, the mysterious. There are allusions aplenty to Shakespeare and the Romantic poets and Greek myths. It all creates a richly mysterious mood.

With no broody Byronic heroes, these tales do have, though, many Gothic elements, which are duly played with. These protagonists are savvy enough to recognize Gothic tropes when they see them, comment on them, undermine them, play with them, get entangled in them anyhow.

These are stories where folk drag on cigarettes and call each other darling and sweetheart and dear. There are no grand romantic gestures or soppy declarations of adoration with their requisite rehashing of the relationship. No, none of that, but there is much cooperation and mutual respect and support.

During the intensity of the investigation, the unraveling of the mystery, there is a stripping away of the facades. And our heroine and supporting hero see one another, really see one another, and love blossoms quite immediately and intensely and forthrightly.

There’s no sex, but caves feature prominently in Mary Stewart’s stories, so there’s probably something Freudian there. There are some kisses, but more often than not it’s a well-placed arm around a shoulder, being held tight. Love is more in the actions than the words. So, by the time the mystery has been solved, well, our two are looking at one another and straightforwardly saying yes to a future together.

RELATED: CRIMES OF PASSION (2013): A COMPELLING AND COZY CRIME DRAMA FROM SWEDEN

No Byronic soul-searching here. I don’t know if this is a generational thing, a post-WWII, we-don’t-know-what-the-morrow-may-bring sort of thing. But there is a seize-the-day or, rather, seize-the-love aspect to these tales which I find intensely refreshing and delightful. Having found the courage and moxie to face down murderers, our heroines find the courage to face and accept love.

There’s a dearth of effusive, gushing romance. Stewart holds back, alludes, shows, doesn’t put it all into words. This hooks the reader, allowing us to supply the details of that kiss, of where this will lead. It is all very non-explicit and titillating in its muted subtlety.