Touch Not the Cat is a romantic suspense novel by the late, great Mary Stewart. The tale follows the travails and triumphs of one Bryony Ashley, a young, thoughtful woman. Bryony is one in a long line of Ashleys responsible for looking after the family estate of Ashley Court. But when tragedy strikes, what potentially murderous secrets will the old ancestral home reveal?

The Burdens of Home

Bryony is working as a hotel receptionist in Spain when she learns of her father’s sudden death in an apparent hit-and-run accident in Austria. Grieving, she returns to the ancestral home in England, to Ashley Court, to begin to deal with all the details of the death. She is alone. Her mother died when Bryony was a child. And an inheritance clause, written in stone many generations back, ensures that Bryony cannot inherit Ashley Court. Ashley Court must go to a male heir, that would be to her father’s cousin and his three sons.

There is no longer the manpower nor the money to maintain Ashley Court as it once was. Much of the land has been sold off, public tours and rich American tenants are about the only source of income on the old estate. Bryony and her father had long since moved out of the manor house and into a cottage on the grounds.

The testament has many complicated clauses, and as it’s all being sorted, the heirs apparent return to Ashley Court, her beautiful second cousins, identical twins, Emory and James. They are pressuring her for a quick sign-over of the estate. But she’s noticing valuables missing from the manor house. And her father’s dying words, transcribed by a dutiful police officer in Austria, are a haunting riddle, alluding to a secret that he should have told her. 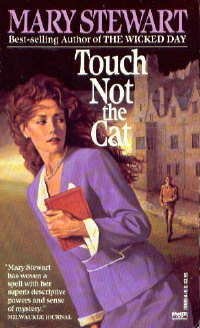 A Lover Unknown to Even Herself

You see, Bryony has an unknown lover, a lover unknown to even herself. Gifted with the Ashley sight – it runs in the family – Bryony has had a telepathic connection to an unknown person for much of her life. They communicate via thought blocks – images, feelings, thoughts just popping up in her head – so she has no voice, no face, no nothing to indicate as to who this man is. She assumes that it must be someone in the family, must be someone of Ashley blood, and is, therefore, convinced that one of her second cousins is the man. But which one? How will she know? And what happens when an unknown lover becomes known? Does it disappoint?

So, Bryony has returned home to not just sort out her father’s affairs and solve his dying riddle, but to shed light on her own riddle as well, to find out just who she has been baring her soul to for all these years. And can I just say that when she does find this man, well, it’s pit-of-your-stomach good! A warm, tingling, sighing “Yes!” I’ll admit to rereading the passage a couple of times after having finished the book. Yeah, it’s that romantically good.

RELATED: MY BROTHER MICHAEL (1959) BY MARY STEWART: DON’T JUDGE A BOOK BY ITS TITLE!

And, overall, Touch Not the Cat is a good, good read. There are lots of Gothic elements, many even being played with. There’s a star-crossed-lovers, Romeo-and-Juliet theme going on here. And there’s a historical mystery from generations before, which needs solving in order to shed light on the present. Yeah, it’s good stuff.

Mary Stewart writes beautifully – witty, evocatively. There is perhaps a bit more purple prose than in the first of her novels that I read, fluffier descriptions about a certain unknown lover who’s just become known, but I won’t fault that. If you enjoy mysteries and romances, then this is a book for you.

Adaptation Recommendation: Touch Not the Cat should have been adapted to the screen ages ago. I can totally envision this as a 2- or 3-part miniseries. And the storyline could easily be updated to the present day if needs be. Although I do love a good period piece. So, if I could put a little bug in the BBC’s ear, it would be to take a gander at the works of Mary Stewart…

Content Note: Not much to come after. There is one usage of a racial slur, said by a minor character.