Passengers (2016): Can You Find Love in Deep Space Isolation? 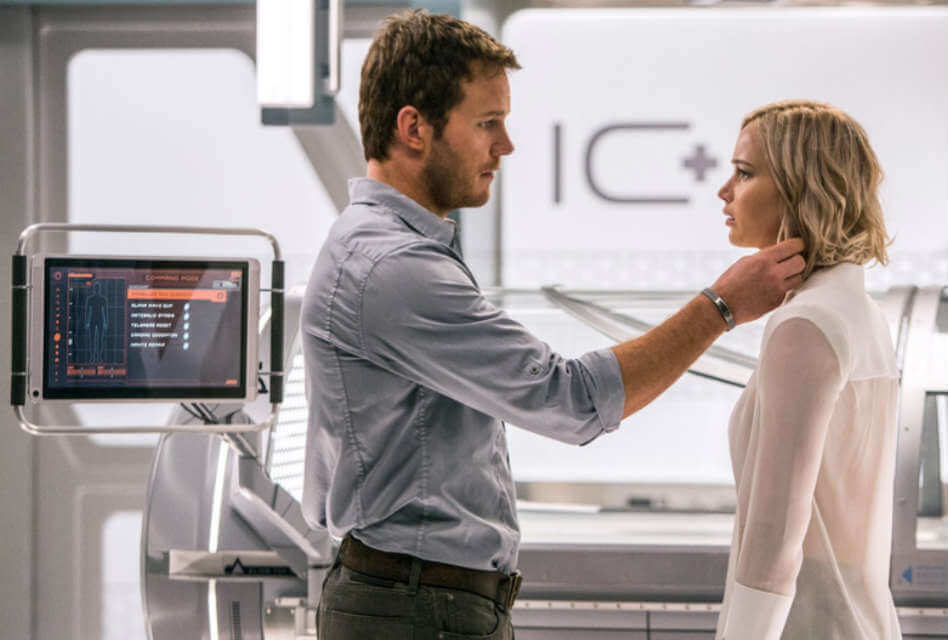 Passengers is a sci-fi romantic dramedy starring Chris Pratt and Jennifer Lawrence. Laurence Fishburne and Michael Sheen support. And that’s about it for the cast, which says something about the nature of this film.

Passengers is a tight little film, focusing on the emotional and physical toils of isolation on first, one man, Jim Preston (Chris Pratt), and later, one woman, Aurora Lane (Jennifer Lawrence). Both are travelers on a spaceship bound for a new earth planet, a journey that is to take 120 years in hibernation pods. But they are no longer in hibernation. They are awake and alone on a ship in deep space, awake on a journey that still has 90 years to go.

Five thousand colonists, travelling to a distant new world, sleep in hibernation pods on a starship. A program glitch opens the pod of one mechanical engineer, Jim Preston. Only a quarter of the journey has taken place, and Jim finds himself alone on starship in deep space. His only companion one android bartender (Michael Sheen), who never leaves the lounge. As a year progresses, his physical and mental wellbeing deteriorate. He’s getting increasingly desperate and despondent until he finds Aurora, the sleeping beauty in her hibernation pod.

Jim accesses everything he can on Aurora, finds out she’s a writer, reads all she has written. He obsesses over her. His deepfelt longing for human connection pushes him to consider waking Aurora from her slumber. But in opening a hibernation pod, as he has learned with his own, you cannot close it again. So, to wake her up is to kill the life planned on the new colony 89 years in the future. This is Jim’s dilemma.

After much deliberation, he wakes her, claiming it was the same glitch as had awakened him.

But how does Sleeping Beauty react to being roused? Does love from afar make love up close and personal possible? Is Aurora, the person, as lovable as Aurora, the sleeping ideal? Is it love of necessity and proximity or of true love? And what happens if Aurora discovers the truth, that Jim lied and stole her future from her? Can any love weather such a betrayal?

Passengers is a film with two very likeable leads, who have great chemistry. The special effects are grand. Yes, the production quality is topnotch. But the whole story is a bit of a muddle. Sweet rom-com at times, thrilling adventure at others, it never quite finds its footing. And the whole central dilemma – the violence that is inherent in stealing another’s life – is never quite explored fully.

RELATED: ROMANTIC MOMENT OF THE WEEK – JOHN AND MAUREEN ROBINSON’S KISS IN ‘LOST IN SPACE’

So, while the film is definitely pushing you to read this as fate and true love, there is this lingering unease of obsession, possession, stalking, Stockholm syndrome. And maybe there’s some sort of philosophic correlation to be made there about violence and love. I don’t know. But the meet-cute in this film has such violence attached to it, that it’s hard to just relax into the rom-com tropes after that.

Yeah, I’ve hummed and hawed about this film. It’s entertaining in its way. There are two strong performances from the leads. And the chemistry is there. But still, I was left with a certain unease, like I never truly could get into the movie. Yeah, Passengers is a bit of a space age muddle. So, depending on how much you enjoy a good muddle, Passengers just might be your type of film (-:

Where to Watch: DVD or Digital.

Content Note: Rated PG-13 for sexuality, brief partial nudity and action/peril. There is some brief skin shown during a sex scene, but nothing explicit. And Chris Pratt’s derriere is glimpsed on a couple of occasions – very briefly.

24shares
We use cookies to ensure that we give you the best experience on our website. If you continue to use this site we will assume that you are happy with it.OkNoPrivacy policy