Fred Astaire and Ginger Rogers are one of the most enduring and popular pairings in classic film. Mention their names and they are instantly recognizable, even by those who have never seen their pictures. Their chemistry was first noted in Flying Down to Rio in which they had small supporting roles. They nearly stole the film from the main stars and a legendary film couple was born. Swing Time was their sixth collaboration together and is often considered one of their best.

In order to marry his hometown fiancee, gambling dancer John “Lucky” Garnett (Fred Astaire) heads to New York to make $25,000. His friend and sidekick Pop (Victor Moore) follows him like a faithful dog. On his first day in the city, Lucky has an unfortunate first meeting with Penny (Ginger Rogers), a dance instructor. Not only do Lucky and Pop almost get Penny arrested, but they also cause Penny and her friend Mabel (Helen Broderick) to lose their jobs. Even though Lucky convinces Penny’s boss (Eric Blore) to re-hire her, she is not so easily won over.

But Lucky is in luck because he and Penny are now dance partners. The more time they spend together, the more they begin to fall for each other. However, both try to resist their mutual attraction. Lucky has not forgotten his purpose for being in New York, even though he never mentions it to Penny. As for Penny, her longtime admirer Ricky Romero continues to propose to her despite multiple rejections. Meanwhile, Pop and Mabel connive to see Lucky and Penny end up together.

Fred and Ginger -Lighter Than Air 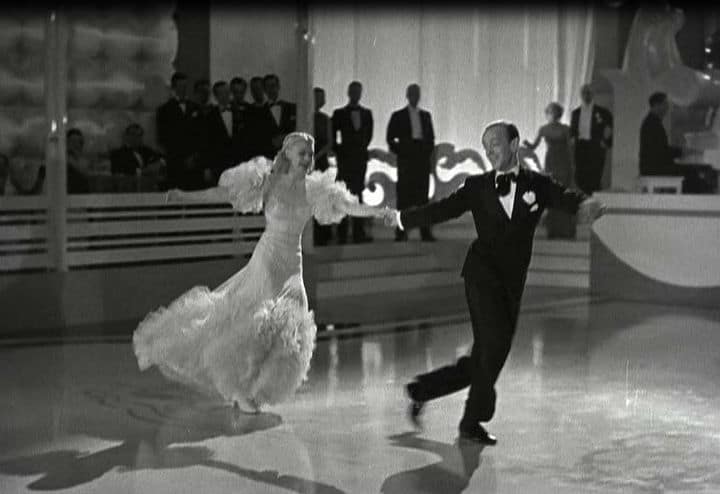 There is a reason Fred and Ginger’s pictures are still remembered today. They are an absolute joy to watch. The chemistry between them is light and fun, but absolutely real. But their dancing skills may even exceed their acting.  In a Fred and Ginger film, the dancing is a language of its’ own. One of wooing, reluctance overcome and romance. It tells as much of the story as the dialogue does. That is what makes their films, including Swing Time, so unique and popular after all these years.

Watching them dance together is always a memorable experience. Though Ginger wasn’t a trained dancer like Fred, she matched him step for step. There is an old quote that she did everything Fred did, only backwards and in heels[1]. They both worked hard to make their dancing scenes appear effortless. In fact, Ginger claimed that they practiced the last number, Never Gonna Dance so many times that her shoes filled with blood[2]. That work paid off because they always look lighter than air.

The Ingredients of a Successful Film

Another selling point of Fred and Ginger’s films together, including Swing Time, is the supporting cast. Every one of their movies boasts some of the best character actors of the time. Many of them were cast in more than one of their films. This lends a feeling of familiarity and continuity to their movies, even though each one has a unique plot. In Swing Time, Victor Moore and Helen Broderick act as the foils for the popular pair. Their average, middle age looks and dry humor are the perfect counterbalances to Rogers and Astaire. My one complaint is that Eric Blore has only a brief scene as Penny’s boss in Swing Time. It’s such a waste of his talent, but it is still a pleasure to see him make an appearance.

Though dancing is the hallmark of the Fred and Ginger partnership, that isn’t the only musical skill used.  They sing two of my favorite songs from their films in Swing Time. The jaunty tune, Pick Yourself Up is one I often sing to myself as a reminder when I fall short. “Pick yourself up, dust yourself off, start all over again.” Who could help but be inspired?

Then there is the unofficial theme song of the film, The Way You Look Tonight, which anyone who has seen My Best Friend’s Wedding might remember. Written for this film by Dorothy Fields and Jerome Kern, it won the film’s only Oscar. It has since been sung by musical artists like Bing Crosby, Billie Holliday, Tony Bennett, Andy Williams among others and was popularized by Frank Sinatra.

Perhaps another reason for Swing Time‘s success is all the talent behind the camera. Respected names such as director George Stevens, musician Jerome Kern, costume designer Bernard Newman and dance director Hermes Pan worked together to create a beautifully shot film, with unique design, flawless musical routines, and gorgeous costumes. Hermes Pan was nominated for an Oscar for directing Astaire’s dance solo honoring Bill Robinson in Bojangles of Harlem. Modern audiences may find it surprising to see Astaire in blackface for this number, but the choreography and execution of this number are flawless.

Fans of Fred and Ginger each have their own favorite among the pair’s films. But Swing Time is always one of the top choices. It combines the best of everything that makes their movies so much fun to watch. Fans of competitive dancing television shows like So You Think You Can Dance should really enjoy Swing Time as the ballroom routines have inspired many of today’s dancers. But even if you are not a dancer there is much to appreciate in Swing Time. It is the type of film that continues to inspire and to give pleasure and joy to a whole new generation of admirers.

Our romance-themed entertainment site is on a mission to help you find the best period dramas, romance movies, TV shows, and books. Other topics include Jane Austen, Classic Hollywood, TV Couples, Fairy Tales, Romantic Living, Romanticism, and more. We’re damsels not in distress fighting for the all-new optimistic Romantic Revolution. Join us and subscribe. For more information, see our About, Old-Fashioned Romance 101, Modern Romanticism 101, and Romantic Living 101.
Pin this article to read later! And make sure to follow us on Pinterest.
By Brittaney B. on September 4th, 2018