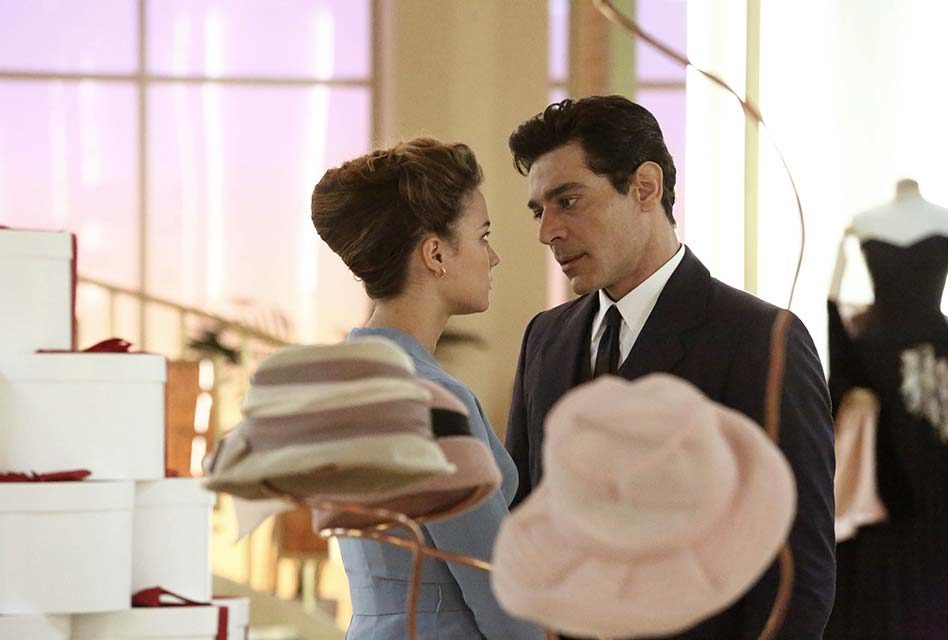 A few years ago, Emile Zola’s novel Au Bonheur des Dames was adapted for television for the first time. Though much loved, The Paradise ran for only two seasons on the BBC. But fans of book and show, rejoice! RAI, the Italian public television station, currently airs a new adaptation of Zola’s novel. This one has been given an updated setting in 1950’s Milan with names more befitting the characters’ Italian heritage. Il Paradiso Delle Signore (The Ladies’ Paradise) is a more loosely based version of Au Bonheur des Dames but with a still recognizable main plot.

When the fiery Teresa Iorio learns of her fiancé’s infidelity, she sees her chance for freedom. She flees to Milan to help her aunt and uncle with their small textiles store. Her uncle’s business rivalry with the much larger department store, Il Paradiso Delle Signore, soon sees her exercising her temper on the mysterious owner, Pietro Mori. He’s a man with a shady past and penchant for taking risks. Immediately, Teresa makes quite an impression on Mori and his longtime friend and right-hand man Vittorio Conti.

Soon, she’s working as a salesgirl at this glamorous store. Teresa finds her world expanding as she forms new relationships with her co-workers and witnesses the behind the scenes management of Il Paradiso Delle Signore.

As Teresa grows in independence, she also becomes a point of contention between Mori and Conti. Both are smitten with her. But Mori is already involved with the daughter of his biggest investor. While Conti proves to be a great help to Teresa. However, Conti’s reputation as a ladies’ man is well earned and gives Teresa cause to doubt. Of even greater importance is Teresa’s own desire for independence.

All of this plays out against the inner workings of the department store, the societal expectations of the 1950’s, and a backdrop of actual historical events.

Fans of BBC’s The Paradise or ITV’s Mr. Selfridge should enjoy The Ladies’ Paradise. Though the two Paradise adaptations share an underlying main story, there are enough differences between the two series to make both of them unique. Initially, I found myself making comparisons between the two but soon stopped as I learned to appreciate Il Paradiso Delle Signore on its own merits. 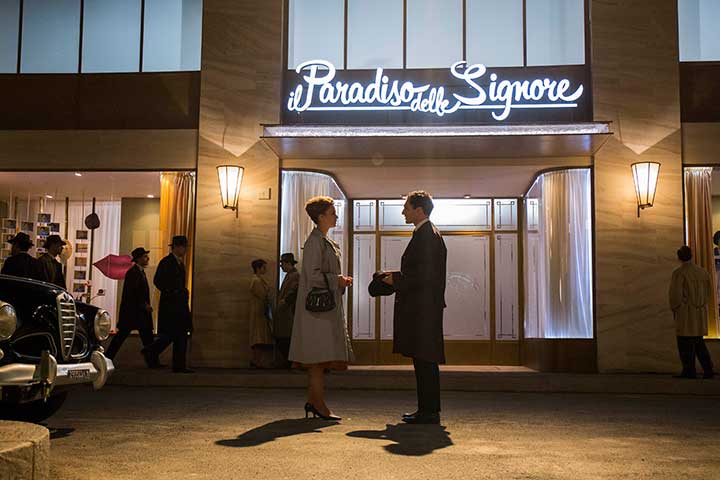 One of the major differences in the Italian adaptation is the love triangle between Mori, Teresa, and Conti. This is a new twist to the now familiar plot of both the novel and The Paradise. I don’t mind this trope, if well done. Those familiar with this story know who our heroine ultimately chooses, but Il Paradiso Delle Signore keeps the viewers guessing.

On the one hand, Teresa shares an intense and passionately restrained relationship with Mori. Though already involved with another woman, he cannot hide the desire his longing glances reveal. He allows Teresa more liberties on the job than any of the other employees.

On the other hand, the chemistry between Teresa and Conti is palpable and charming. Their interactions are open and easy as he pursues her. This equally balanced triangle is not the only love fest happening in this show either. There’s no shortage of love as many of the store’s employees experience their own romances. 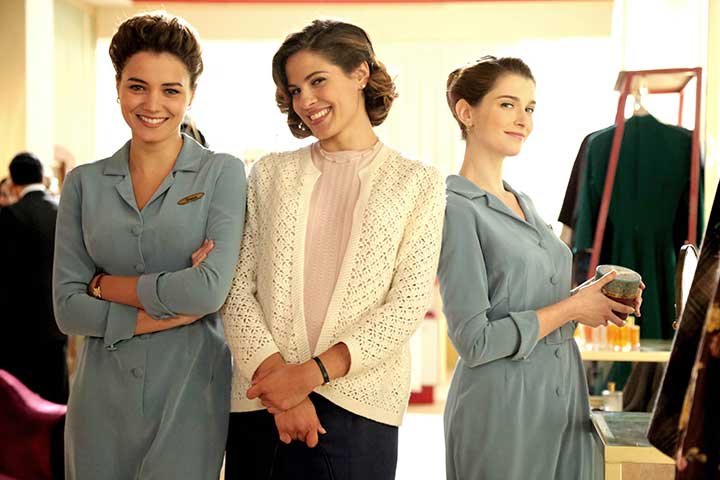 One area Il Paradiso Delle Signore excels in is character development. Though the series boasts a large cast, they each receive individual attention, with complete backstories and unique personalities. Each one experiences personal growth, with the exception of Mori who remains the same throughout. In all, I found myself as intrigued by some of the supporting characters as I did with Mori, Teresa, and Conti. As all the characters grow individually, they also grow as a unit forming a family of sorts out of co-workers with diverse backgrounds and motivations.

Another highlight of this series is its intricate and complex plot development. There is a seamless weaving together of the various storylines of all of the characters. The Ladies’ Paradise has the feel of an Italian Mad Men at times as it depicts the ruthless and cutthroat tactics Mori engages in to keep his business thriving. It also addresses the emergence of female independence, particularly in Teresa’s journey.

Through the cast of supporting characters, it also presents perspectives on adultery, homosexuality, bribery, corruption within business and government, interactions with the local mafia, the early years of creative advertising and a whole other host of topics. Actual historical events are also included within the series and placed into context by the response of the characters.

With two seasons currently available, there’s plenty of time for the plot and character to develop. Season one sees Mori engaged in a personal war with his investment banker who is convinced Mori’s responsible for his brother’s death.

Teresa’s coworker, Anna finds herself torn between her wealthy boyfriend and childhood friend Quinto. Another co-worker becomes the object of a stalker despite the fact she has a husband. And the ladies’ manager Clara Mantovani still struggles with a secret past.

Then there’s Teresa. Not only does she find herself caught between Mori and Conti, but also her past and her present. Her father does not approve of her newfound independence and demands she return home. Then her past meets her present when her brother arrives in Milan and becomes involved in some shady business. (Fans of Mr. Selfridge will also recognize some borrowed plot lines.)

Season two continues with almost the entire return of the main cast plus a few new faces. New facets of Mori’s past continue to haunt him with the arrival of a woman from his past. He also battles to disconnect himself from a childhood friend who is now a local mob boss. Meanwhile, Conti strikes out on his own, starting his own advertising agency. Many other storylines from season one continue to see further development as well.

The Ladies’ Paradise will make you feel as if you’ve traveled back in time.

Another highlight of this new setting is the total immersion in Italian design, fashion and the societal culture of this era. If you’ve ever dreamed of an Italian vacation, then be prepared to find yourself immersed in that dream. The Ladies’ Paradise will make you feel as if you’ve traveled back in time. The charm of cobblestone streets, the Milanese sun bouncing off classic cars and the stately elegance of classical architecture. You may find yourself drooling over the colorful, yet still, ladylike silhouettes worn by the various classes of women portrayed onscreen which are of course always perfectly accessorized.

Il Paradiso Delle Signore (The Ladies’ Paradise) is a romantic drama with something for everyone. This sophisticated Italian soap opera is a visual pleasure with enough complexity to also engage the heart and mind. Fans of BBC’s The Paradise may also enjoy seeing a new interpretation of their beloved show. But whether you watch for the drama, the romance, the storylines, or the characters, Il Paradiso Delle Signore is sure to win you over.

Where to Watch: This series is currently only available on Acorn TV. With each season running at about twenty hours each, the small monthly subscription fee is well worth it. English subtitles are provided for this Italian series.

Content: I estimate this show would garner a TV-14 rating for its’ discussion of adult topics. It also depicts adult content with a few sex scenes and a couple instances of violence.

Have you watched The Ladies’ Paradise? What are your thoughts on this new Italian Period Drama?