The Three Lives of Thomasina: A Heartwarming Tale of Love and Loss 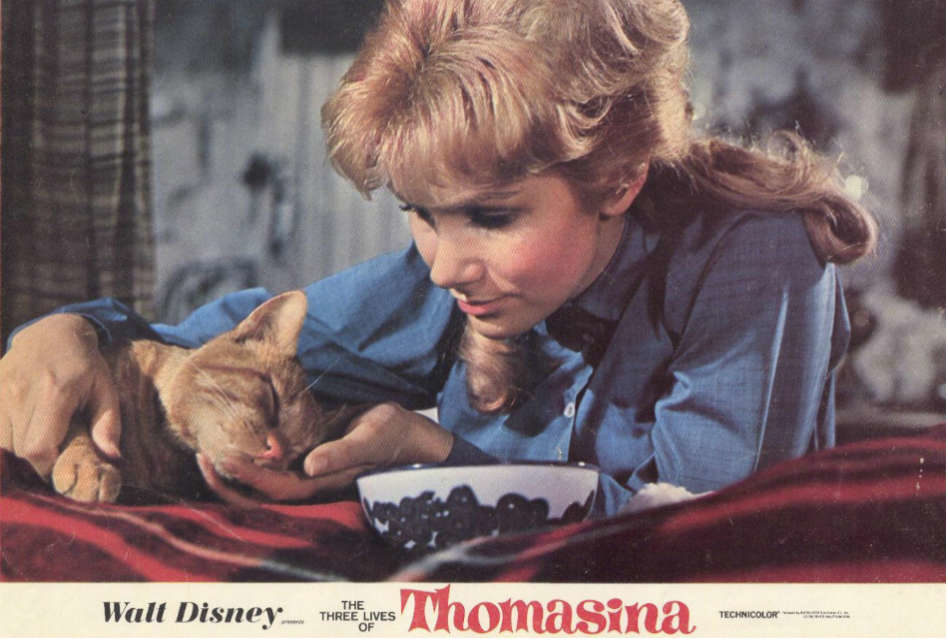 Classic Film Review: The Three Lives of Thomasina: A Heartwarming Tale of Love and Loss

There are some movies that just do not hold up. You know the ones. That classic that you loved as a kid and are excited to rewatch again. Sometimes, they’re not that good, and it kind of hurts. This is not one of those cases. I watched The Three Lives of Thomasina a lot as a kid, and when I rewatched it as an adult, I still loved it. Even though it made me cry.

The Three Lives of Thomasina follows a cat named Thomasina and her family, Andrew MacDhui and his daughter, Mary. Thomasina especially loves Mary, who is a lonely little girl. When a visit to the fish market takes an unexpected turn, Thomasina is in grave condition. Mary is convinced that her father can save her beloved cat. Since he is the town vet, this makes sense. Thomasina must be put down, however. This breaks Mary’s heart, and strains her relationship with her strict father even more.

To make her feel better, Mary’s friends arrange a funeral for Thomasina. They make a coffin, break out the bagpipes, and have a funeral procession through town. The town, who already feel like Andrew didn’t care enough about people’s pets, begin to turn against him. This is further fueled by Mary’s friends, who are angry about Thomasina. 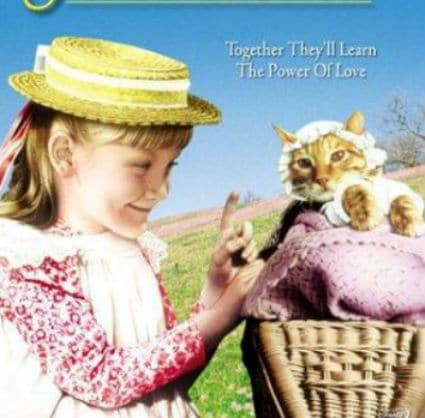 Mary and Thomasina
“The Three Lives of Thomasina”

Of course, our heroine is a cat. Thomasina wakes up in Cat Heaven, where she learns that she had just had her first of nine lives. She is sent back by Bast, the Cat Goddess and  found by Lori, a local witch who has a way with animals. With the town turning against him, Andrew sets off to confront the witch and learns something unexpected. All the while, Mary is feeling lost, confused, alone, and betrayed. Meanwhile, Thomasina keeps feeling like there is something missing from her second life.

A circus that mistreats its animals, Mary’s noisy friends, and pneumonia all add more stakes to this heartwarming tale of a cat and her girl, and a girl and her father. Will Thomasina remember Mary? Can Mary and her father reconcile? What is Lori’s secret? These questions will be answered in The Three Lives of Thomasina.

Our main character and narrator is Thomasina, the cat who adopted the MacDhui family when they moved into her house. While she doesn’t mind the housekeeper, Mrs. MacKenzie, she is not overly fond of Andrew McDhui, the vet. She is, however, very fond of his young daughter Mary. Thomasina puts up with Mary dressing her up and spends a lot of her second life trying to figure out what was missing from her life before she finally remembers Mary. I want to point out that Thomasina is a drama queen, and that makes her an even better narrator. 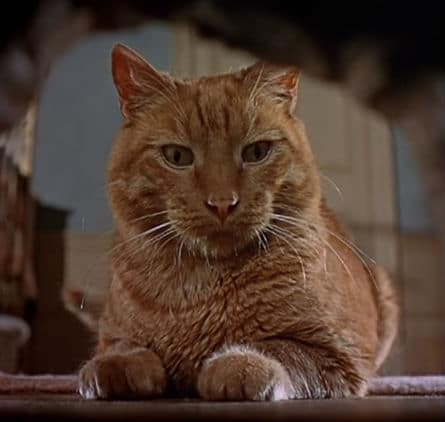 Thomasina Herself
“The Three Lives of Thomasina”

Mary MacDhui is the young daughter of widowed veterinarian Andrew MacDhui. Her father loves her but distanced himself from her after the death of his wife. Because of this, Mary forms a close bond with her cat. She is devastated when her father can’t save a gravely injured Thomasina. Feeling betrayed, Mary begins to think that she lost both her father and her cat that day. When Mary gets pneumonia, she feels lost and sad, which does not help her condition.

Andrew MacDhui is a competent veterinarian who lacks empathy. After the death of his wife, he began to bottle up all of his emotions, rarely showing them to anyone. Although he loves his daughter dearly, he is not good at showing it. After he has Thomasina put to sleep, the town begins to turn against him, painting him as a heartless man. When people begin to seek out the witch in the glen instead of him, he goes to confront her. This changes his life in ways he could not begin to imagine. 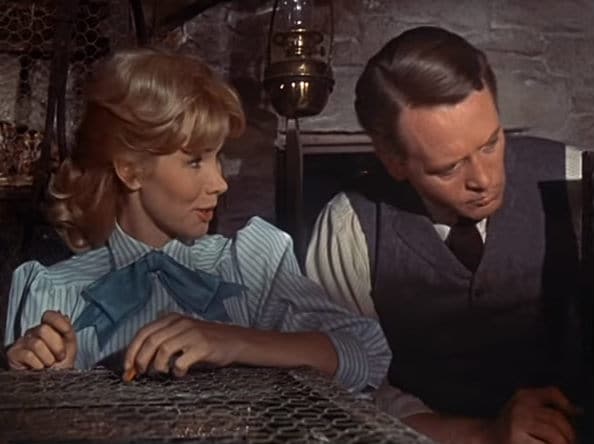 Lori and Andrew
“The Three Lives of Thomasina”

Lori MacGregor is the witch in the glen, but of course, she is not a witch. She just has a way with animals. She cares for them and they trust her, because she shows them love. After Thomasina returns from the dead, Lori finds her and takes care of her until Thomasina remembers Mary. The town is skeptical of Lori, and the ones that think she isn’t a witch still think she’s odd.

Mary’s friend Geordie is the first in town to bring Lori a wounded animal after Andrew turns it away. Later, he, his brother, and their friend bring her a badger to heal. Geordie is also the first to realize that maybe, Lori is a good witch, the kind who helps animals. Lori takes care of Geordie’s toad, which wins over the young man.

The Three Lives of Thomasina is set in 1912. It takes place in Inveranoch and is also filmed in Scotland. This makes it look even more real. I think the story is helped to come alive by using Scottish Gaelic, in addition to English. It’s a beautiful movie.

The costumes are convincing, and the technology fits the time period as well. You can ruin a movie with inappropriate technology, you know! Speaking of technology, the scene where Thomasina is in cat heaven can look a little cheesy at times but try to overlook that. Disney was using the best technology that they had available at the time to get those effects.

The main story is about Thomasina and Mary, and the deep love that connects a lonely little girl with her beloved cat. However, there is a romance occurring between Lori and Andrew. The two butt heads, but learn to respect each other. Lori helps Andrew to remember that he is not alone in the world, and he helps her care for injured creatures. In the end, they learn to trust each other, finding that they are a good pair. Her loving nature complements his overwhelmingly logical one.

The Three Lives of Thomasina is based on the novel Thomasina, the Cat Who Thought She Was a God, by Paul Gallico. I read that Paul Gallico, like PL Travers, was not the biggest fan of Walt Disney. Reportedly, Gallico was quite amused when one of the cats playing Thomasina refused to do her stunt. It it is also interesting that Karen Dotrice and Matthew Garber play Mary and Geordie. They would later play Jane and Michael Banks in Mary Poppins. 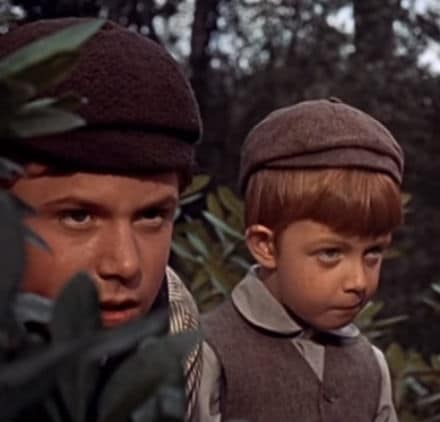 Content Warning: Other than the crying, there are incidents of cruelty to animals and a cat funeral.  As a family film made in the 1960’s, it is not overly graphic. It would maybe have a PG rating today.

Have you seen The Three Lives of Thomasina? What did you think? Let me know in the comments!

50shares
We use cookies to ensure that we give you the best experience on our website. If you continue to use this site we will assume that you are happy with it.OkNoPrivacy policy