Growing up, my parents exposed me to many popular musicians of the ’70s. Artists like Simon and Garfunkel, Creedence Clearwater Revival, The Grass Roots, The Rolling Stones, The Mamas and the Papas and one of my mother’s favorites, ABBA.

In 2008 a new generation was introduced to the Swedish band ABBA when their songs were featured in the musical film Mamma Mia! Despite some criticism of the film, it became a box office success. Exactly ten years later, the sequel Mamma Mia! Here We Go Again allows fans to revisit all that they love about the original. It continues the story begun in Mamma Mia!. It also depicts the history of how Donna found herself in Greece and met Sophie’s three fathers.

A year after her mother’s passing, Sophie is finally fulfilling her mother’s dream. The hotel Bella Donna is all set for a grand re-opening. However, Sophie’s triumph feels bittersweet. She desperately misses her mother, two of her three dads are unable to attend and she and Sky have hit an impasse in their relationship. Fortunately, she has some support from her mother’s friends Tanya and Rosie, her third dad Sam and the new hotel manager Fernando Cienfuegos. Sophie will need all the help she can get as she processes her grief and faces unexpected obstacles in preparing for the re-opening.

Meanwhile, back in 1979, Donna Sheridan graduates from college and begins her search for freedom and identity. Traveling through Europe, she meets a young man in Paris. Though he feels a special connection with her, Donna cannot stay. She believes her destiny is yet to be found on a small Grecian island. As she continues her journey, she meets a young sailor who happily transports Donna to the Isle of Kalokairi aboard his boat. Upon her arrival, Donna settles into an abandoned farmhouse, lands a job singing at the local café and meets another young man who will play an important role in her future.

Fans of the original Mamma Mia! should find much to love in this long-awaited sequel. With the return of its’ principal cast, a deeper look into Donna’s past and the introduction of a few new characters, Mamma Mia! Here We Go Again, is pure fun entertainment, though not without some flaws.

One of the weaknesses of this movie is the plot. The storyline for Sophie in the current day is rather sparse and there is no character development for the new additions to the cast. As for the revelation of Donna’s history, it does not vary much from what was already revealed through the reading of her diary in the original movie. There is, of course, further development of her background which does add to the overall picture of Donna’s journey. Eagle-eyed fans will notice aspects which don’t quite line up with what we already know about Donna. But overall the sequel doesn’t veer too far away from what we learned in the first Mamma Mia!.

The transitions between past and present are fluid and well matched. In fact, this is one of my favorite things about Mamma Mia! Here We Go Again. The camera moves seamlessly between two time periods showing the transition and growth of the hotel as Donna first walks around dreaming of what could be while in the present Sophie walks through the completion of that dream. However, the pacing between the past and present stories is a little less smooth. Overall, this movie is a little less upbeat than its’ predecessor as it explores Sophie’s grief and Donna’s search for a meaningful life. Though some of the original joy remains, Mamma Mia! Here We Go Again, also presents more somber, thoughtful moments.

Once again, I really love how this film focuses on family. It really builds on the bonds which were established in Mamma Mia! and takes them even deeper. Sophie’s relationship with her three dads is so charming and sweet. It’s also one of the more credible portrayals of a child with multiple fathers that I’ve seen. But it’s the mother-daughter relationship between Sophie and Donna which is still the most moving. Though Donna is dead, her presence is still very much felt in this film both by viewers and by those she has left behind.  This bond is much more pronounced and even more authentic the second time around. 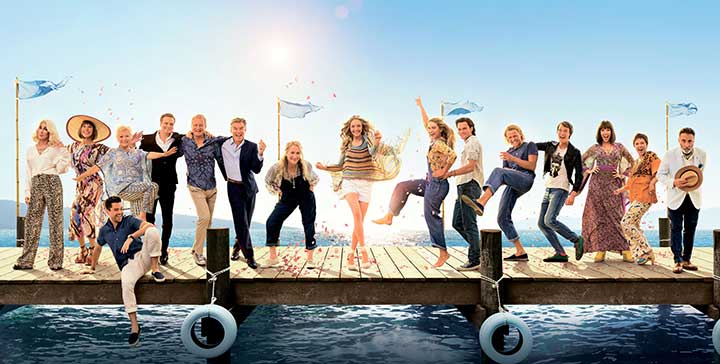 As already mentioned, the sequel sees the return of the primary cast. It is pure joy to see them all reunited on screen. Amanda Seyfried gets the chance to portray a more serious, mature side of Sophie and looks flawless while doing so. Dominic Cooper has less screen time as Sky this time around but still shares great chemistry with his leading lady. Pierce Brosnan’s appearance in this sequel is much more suited to him as he plays the grieving widower and Sophie’s resident dad.  One of the highlights is the return of Donna’s best friends Rosie and Tanya. Christine Baranski and Julie Walters steal the show with their one-liners and personal chemistry. Stellan Skarsgård and Colin Firth display a new level of comfort in their roles and their onscreen relationship as well.

New additions to the cast include the actors playing the younger versions of Donna, Tanya, Rosie and the men. Jessica Keenan Wynn and Alexa Davies are uncanny as the young Tanya and Rosie. They look and sound exactly like the older versions of their characters. Jeremy Irvine, Hugh Skinner, and Josh Dylan are a little less exact in their portrayals of the young Sam, Harry, and Bill. I actually had a hard time telling Sam and Harry apart.

I was thrilled to see Andy Garcia appear as the new hotel manager but disappointed that he didn’t receive more screen time. And as much as I enjoy Cher, her appearance in Mamma Mia! Here We Go Again, felt unnecessary and gratuitous. The real standout performance, however, is Lily James as the young Donna. She captures the independence, free spirit, and joy of her character even better than Meryl Streep did in the original film. 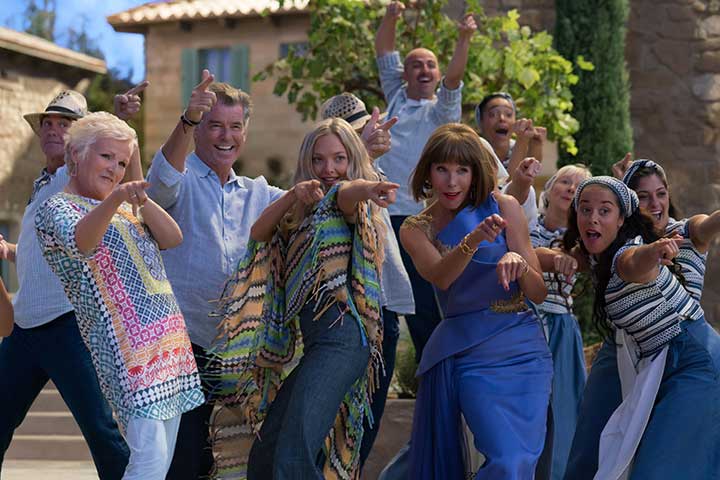 Of course, one of the selling points of Mamma Mia! was the original ABBA songs. This is one of the reasons many looked forward to the sequel. Mamma Mia! Here We Go Again features more of ABBA’s music, but many of their less recognized songs. Though I miss some of their more popular tunes, I do appreciate that it introduced me to some of their lesser-known numbers, some of which are beautifully harmonized. Many of these also have a slower tempo which affects the pacing and feel of the film. But they also produce some emotional moments which were missing in the original. In particular, there is a surprise duet at the end which left me in tears.

That’s not to say that the ABBA songs we all know and love are completely missing. There are echoes of them throughout this sequel as well as full repetitions of Dancing Queen, I Have a Dream, Mamma Mia, and Super Trouper. And once again the post-credits are accompanied by the entire cast singing together in one giant final tribute.

If you love the first film, chances are you will enjoy Mamma Mia! Here We Go Again. Its’ weaknesses are not so great that they can’t be overcome by the pure joy of revisiting ABBA’s songs, the original characters, and cast and an even more developed and emotional family bond. With a mixture of humor and gravity, this sequel is a worthy and entertaining continuation of Donna and Sophie’s stories.

Where to Watch: Currently playing in theaters

Did you watch Mamma Mia! Here We Go Again? Do you agree or disagree with my review? Let me know in the comments what you thought about the sequel!

Our romance-themed entertainment site is on a mission to help you find the best period dramas, romance movies, TV shows, and books. Other topics include Jane Austen, Classic Hollywood, TV Couples, Fairy Tales, Romantic Living, Romanticism, and more. We’re damsels not in distress fighting for the all-new optimistic Romantic Revolution. Join us and subscribe. For more information, see our About, Old-Fashioned Romance 101, Modern Romanticism 101, and Romantic Living 101.
Pin this article to read later! And make sure to follow us on Pinterest.
By Brittaney B. on August 10th, 2018