Though The Moonstone was produced for television previously in the ’90s, this classic piece of literature is not a period piece I’ve seen. With this lavish new BBC production now available on Amazon Prime, there’s no better time to discover what this story is all about.

In the “last year of the 18th century,” a British colonel steals a sacred diamond from India. What the Colonel doesn’t realize is there’s now a curse on him; three priests track him and seek this moonstone until its safe return to India. Years later, in the event of his death, the cursed stone is to be bequeathed to his young niece, Rachel (Terenia Edwards). The man charged with the task of delivering this stone to Rachel is her ambitious cousin Franklin Blake (Joshua Silver).

A year later, the memory of Rachel sends Franklin back to England. You see, a year ago on her birthday, everything was perfect. Franklin and Rachel planned to enter a courtship. And under its spell, the moonstone captivated Rachel. But the next morning, her stone was gone and with it, the entire household upset. Rachel refuses to speak to Franklin, the police or her mother. In the aftermath is where our story really begins.

Prior to watching this 5-part miniseries, apart from title recognition, The Moonstone and I were strangers. For example, I didn’t know that this novel published in 1868 by Wilkie Collins, is considered to be the first English detective story. I’d have guessed this honor belonged to Sherlock Holmes. But no, it’s The Moonstone.

As anything, this adaptation has flaws. One of which is the storytelling method. The shifts between present and past soon trip over themselves. Or they do in the opening installment. Fortunately, the method and cadence soon iron itself out or perhaps the audience simply becomes accustomed to the rhythm. The other potential flaw is the script and its delivery. On occasion, the scenes do opt for drama beyond the story, and for the script that accompanies the scenes. Despite this, the cast does seem to suit the roles, and I admire much about this romantic mystery.

The leads, both newcomers, are fantastic as Franklin and Rachel. Franklin is a persistent and determined suitor who is easy to like (and yet he’s also one of our favorite types of heroes; a man with a brooding aptitude because of a broken heart). Then there’s Rachel. First blush paints her as a sweet girl, but the more we get to know her (a reveal that’s painstakingly slow since it’s Franklin who’s character is immediately on display), the more suspicious we grow. The costumes are beautiful. It feels like a long time since we’ve seen bonnet and hoop skirt fashions in any BBC production. The use of this era as a story backdrop, and visit to this elegant era, is a treat. 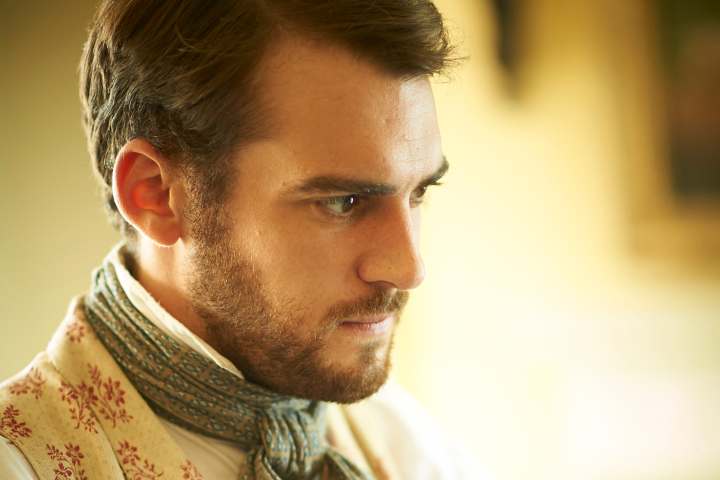 In the end, I really liked this one (and can see a re-watch or two in my future). It’s mysterious without the usual dark themes of the genre, and instead, I find this one has a kind of “cheeky” storytelling nature. Everything is meant to raise a quizzical brow, but the script accomplishes this with humor. Plus, the cherry on top of the detective story is the beautiful romance. Sadly, it plays too little on screen (because of the separation between lovers, and the past vs present timeline), but what’s there is unabashedly romantic.

RELATED: Mary Shelley (2018) – Why You Need to See This Fascinating Period Drama

If you enjoy period films with a lighter approach, cozy mysteries or are a fan (like myself) of pretty much any period drama with the BBC title, The Moonstone is a must see.

Content Note: A woman commits suicide (implied) and there’s brief (non-graphic) backside nudity. There is also some minor suggestive dialogue, but nothing graphic. TV-PG is the rating.

Where to watch: You can currently (at time of publication) watch The Moonstone on Amazon Prime or purchase it on DVD.

Have you seen The Moonstone? What are your thoughts on this newer adaptation?

Our romance-themed entertainment site is on a mission to help you find the best period dramas, romance movies, TV shows, and books. Other topics include Jane Austen, Classic Hollywood, TV Couples, Fairy Tales, Romantic Living, Romanticism, and more. We’re damsels not in distress fighting for the all-new optimistic Romantic Revolution. Join us and subscribe. For more information, see our About, Old-Fashioned Romance 101, Modern Romanticism 101, and Romantic Living 101.
Pin this article to read later! And make sure to follow us on Pinterest.
By Rissi JC on August 8th, 2018

2 thoughts on “The Moonstone – Period Romance That You Should Watch”