Romantic Moment of the Week: ‘Sleepless in Seattle’ and How to Be in Love in a Movie 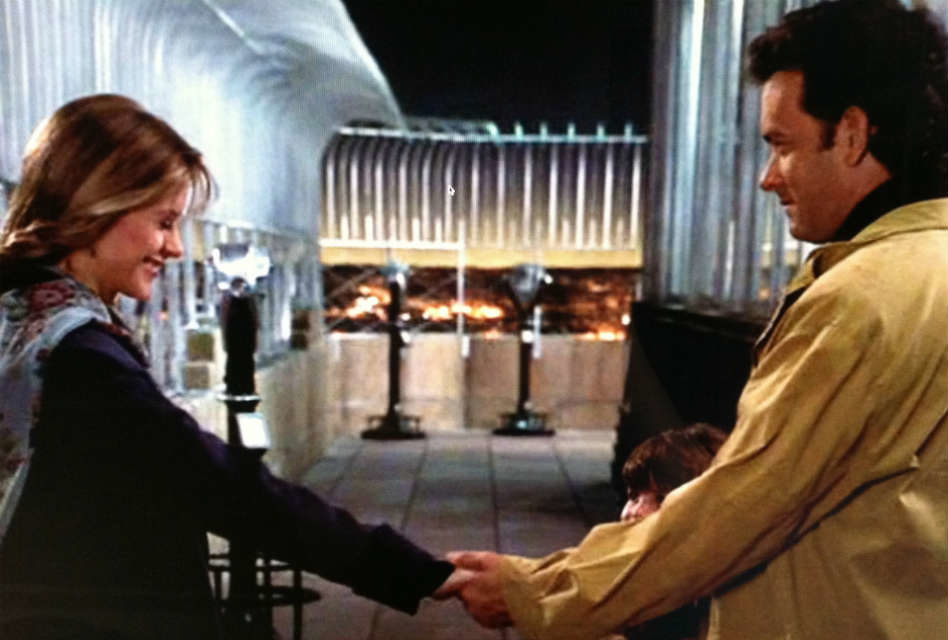 This week marks the 25th anniversary of Sleepless in Seattle! So, we thought it was time to put the spotlight on this “perfect” rom-com for the romantic moment of the week. In many ways, looking back at Sleepless in Seattle feels quite a bit like the characters reminiscing about the classic romance of An Affair to Remember.

RELATED: Romantic Moment of the Week: The Age of Adaline and Book Flowers

“Now those were the days when people KNEW how to be in love,” Annie sighs dreamily as she watches An Affair to Remember. “They knew it! Time, distance… nothing could separate them because they knew. It was right. It was real. It was…”

And that’s what both movies achieve with great success: how to be in love in a movie. Sure, we know it’s not realistic to life but isn’t it wonderful to watch? And isn’t it magical to believe in true love if only for two hours? 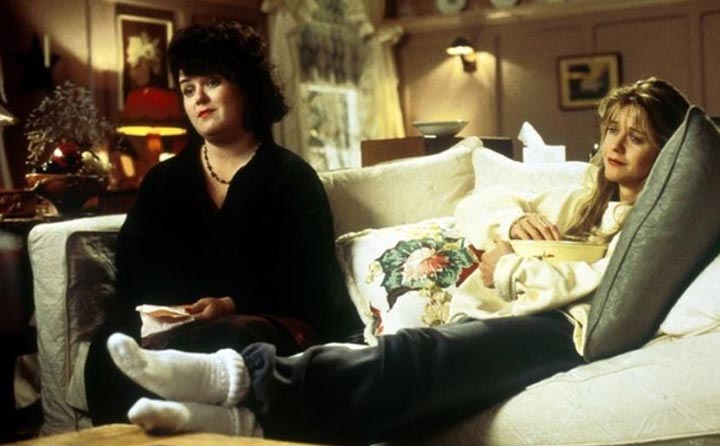 At one point in time, the romantic comedy was a staple of Hollywood movies. But they’ve since mostly faded from view (unfortunately). To fill the void, we often find ourselves turning to these unabashedly romantic comedies of the past with the same dreamy sigh as Meg Ryan.

Those were the days when people KNEW how to be in love…in a movie that is! Filmmakers then often understood the magical, fairytale-like quality of a well-written romantic comedy. Not the paint by numbers version (which I still enjoy) or vulgar male-centric ones (which I don’t enjoy) we often see today. But the real, epic Hollywood romances with swelling music, relatable female characters, ideal leading men, poetic dialogue, an actual comedy with wit, and actors who give award-worthy performances.

“Men never get this movie,” Becky comments as they cry over An Affair to Remember. “I know!” Annie agrees. I’d argue that most filmmakers today don’t “get” the romantic comedy either and it’s a real shame since we’re in need of a major romantic comedy revival. We need more female voices in entertainment like Nora Ephron who aren’t afraid to do romance and do it right.

So, like Meg Ryan and Rosie O’Donnell, take out your bowl of popcorn, and sit back as we explore Sleepless in Seattle…when people really knew how to be in love in a movie! 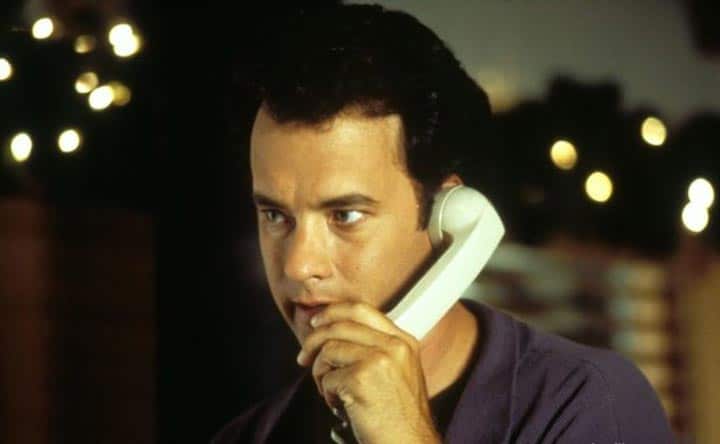 Sam Baldwin (Tom Hanks) moves to Seattle with his son, Jonah, after the death of his wife. After a while, Sam’s still having a tough time which causes his son to worry. It’s then Jonah decides to call a talk-radio program to ask Dr. Marcia Fieldstone for help in finding his father a new wife! Sam reluctantly gets on the phone and opens up about his wife, his sleepless nights, and how he “knew” he was meant to be together with his wife.

Dr. Marcia Fieldstone: Sam, tell me what was so special about your wife?

Sam Baldwin: Well, how long is your program? Well, it was a million tiny little things that, when you added them all up, they just meant we were supposed to be together…and I knew it. And I knew it the very first time I touched her. It was like coming home…only to no home I’d ever known. I was just taking her hand to help her out of a car and I knew it. It was like…magic. 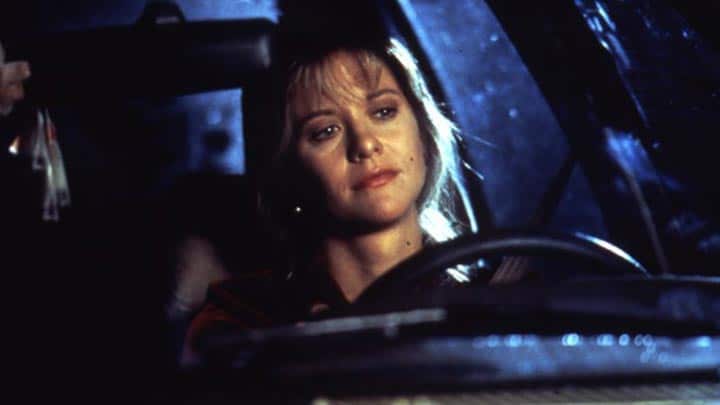 Annie Reed (Meg Ryan) happens to hear the program and falls in love with Sam – even though she’s already engaged. Soon, she writes a letter asking Sam to meet her at the top of the Empire State Building on Valentine’s Day in homage to An Affair to Remember.

Throughout the film, the two are drawn together in an almost fated way but never meet – that is until the end of the movie which is our romantic moment of the week.

Before we get to the actual romantic moment, however, it’s important to point out the foreshadowing placed throughout the movie about “knowing.”

Suzy: She’s gonna meet him at the top of the Empire State Building, only she got hit by a taxi. And he waited and waited. And it was raining, I think…Then she’s too proud to tell him that she’s… [begins to cry] crippled. And he’s too proud to find out why she doesn’t come. But he comes to see her anyway. I forget why, but, oh… Oh, it’s so amazing when he comes to see her because he doesn’t even notice that she doesn’t get up to say hello. And he’s very bitter.

And you think that he’s just gonna walk out the door and never know why she’s just lying there, you know, on the couch with this blanket over her shriveled little legs. [crying] Suddenly he goes, “I already sold the painting.” And he like goes to the bedroom and he looks and he comes out and he looks at her and he kind of just… They KNOW and then they hug.

Sam talks about knowing that he and his wife were meant to be together. That it was like “magic.” Annie and Becky watch An Affair to Remember when “people knew how to be in love.” And Suzy (Rita Wilson), a friend of Sam’s, explains the same classic movie and how Nickie (Cary Grant) knows what happened to Terry (Deborah Kerr) without her explaining the tragic accident.

Which brings us to the actual romantic moment of the week – when they (Sam and Annie) just know.

With her own heart leaping out of her chest, she changes her mind and jumps up to go to the Empire State Building. She’s decided to not give up on fate and the possibility of real romance. But will he be there? It’s almost closing and she may be too late. She runs to her destination with the epic musical score swelling in support. 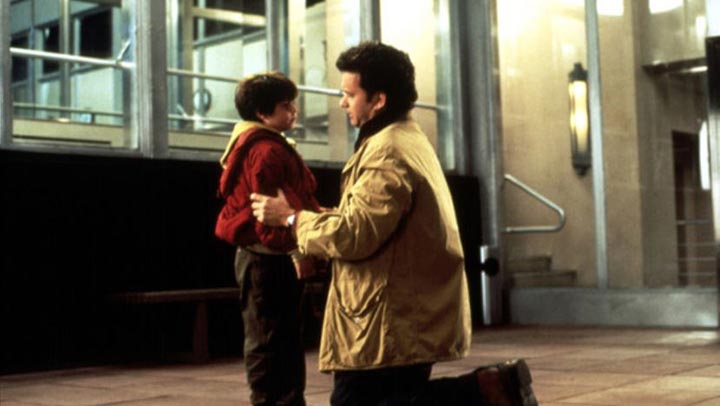 Meanwhile, Sam finds Jonah (who had run away) on top of the Empire State Building. With a sigh of relief, he hugs a disappointed Jonah – who wanted Annie to be there. The two have a sweet father and son heart-to-heart and decide to leave.

At the entrance, Annie runs in only to find they’re not letting anyone else up. But she pleads her case to the worker – who gives in due to his wife’s love for An Affair to Remember.

At the same time, Sam and Jonah head out the elevator to leave. And just as the elevator door closes, Annie comes out a different elevator. No one’s there. Still, she takes a moment. It’s serene, empty. Somehow more romantic without the usual chaos and crowds. As Annie walks around, she stumbles upon a child’s backpack. She opens it up to find a teddy bear. Just then, Sam and Jonah return.

“I left it by the telescopes,” Jonah explains to his Dad. It’s then they see Annie standing there holding his teddy bear. 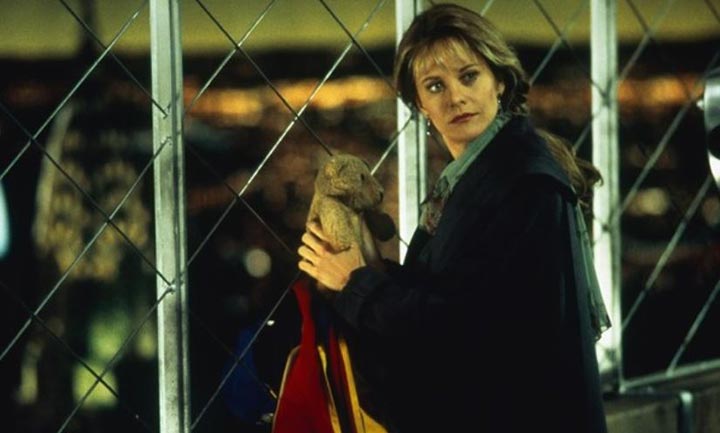 Annie and Sam gaze at each other and just…know. The classic Hollywood score builds the romantic tension as they walk toward each other.

“It’s you,” Sam says, who recognizes her as the mystery woman he’s been interested in.

“Are you Annie?” Jonah interrupts.

“Yes,” she answers with a smile. Sam, confused, can’t believe Annie and the mystery woman are the same person. Annie then takes the opportunity to give the teddy bear to Jonah. But Jonah doesn’t miss a beat. He introduces himself and his father. 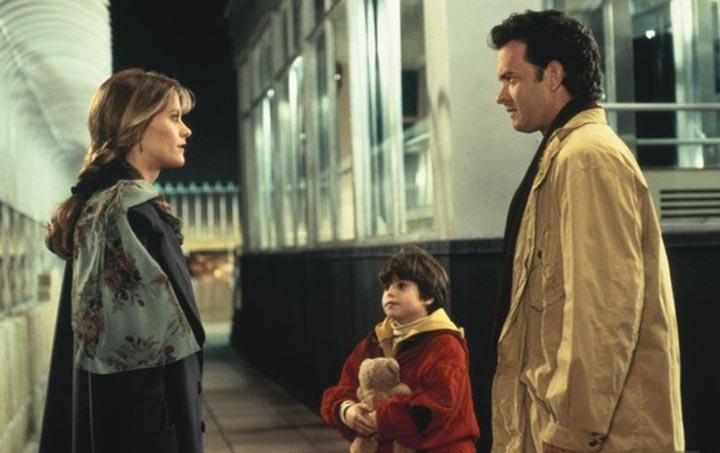 “Hi, Jonah…” Annie stops to look up at Sam and then says his name romantically. He smiles. The two are having an unspoken moment.  They nervously gaze at each other unsure of what to do. Just then, the elevator operator clears his throat letting them know it’s time to leave.

Sam holds out his hand.

“Shall we? He asks her invitingly. She takes his hand and it’s like…magic!

The three of them walk away together, with Annie and Sam staring at each other like long-lost soulmates as “Make Someone Happy” by Jimmy Durante plays in the background. 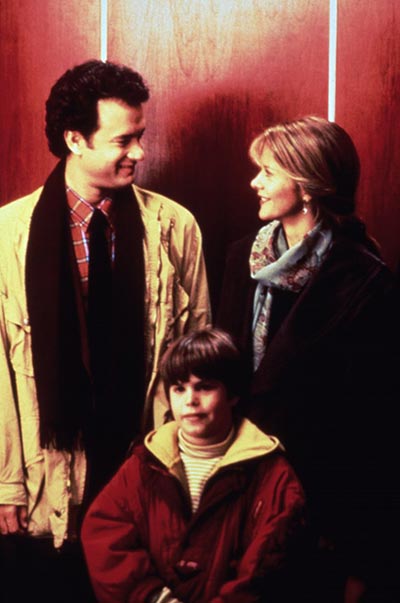 When they reach the elevator, she turns to Sam and says: “Sam, it’s nice to meet you.”

As the elevators close, we see young Jonah smile. And just like that, we have the perfect ending to a perfect romantic comedy. The good old days when people knew how to be in love…in the movies!

You can rent and/or buy Sleepless in Seattle on Digital or DVD. There’s also a newly released 25th-anniversary Blu-Ray.

What’s your favorite part of Sleepless in Seattle? Did you love the ending? Do you wish great romantic comedies would have a revival? Let me know in the comments!