July’s almost here, which means it’s time to find out what’s new and coming soon to Amazon Prime. From romantic period dramas, romantic comedies, classic romances, and more, there’s great content to stream. The highlight of the entire month, however, belongs to the Twilight Saga – which will stream exclusively on Amazon Prime. Some of the other titles I’ve included were quietly added to the streaming service without any official announcement throughout June and others are coming soon!

So, let’s take a look at my romantic recommendations below for Amazon Prime July 2018, each with the official description, personal commentary, rating, and the Amazon Prime release date. Titles are listed in alphabetical order.

Amazon Synopsis: Ruby (Jamie Chung) and Josh (Bryan Greenberg) spent an unforgettable night together in Hong Kong a year ago, and now their brief encounter is about to get a second chance. As effervescent as a perfect first date, this charming walk and talk romance takes full advantage of the magical landscape that is Hong Kong at night.

Why You Should Watch: Starring real-life married couple, Greenburg and Chung, this is a lovely indie romance with a great setting!

Content Note: NR but relatively clean minus some language.

Amazon Synopsis: Valentin (Jeremy Irons), a criminal mastermind whose jewel-stealing business, despite having made him rich, has led him to search for life’s meaning. Set on a path of self-discovery, Valentin sets off on a worldwide sailing trip with the police at his heels. Stopping in Morocco he meets a burned-out jazz singer and they begin a life-changing affair. Premiered at the 2002 Cannes Film Festival.

Why You Should Watch: If you love classic romances, you’ll probably like this lesser-known romantic drama.

Why You Should Watch: If you’ve yet to see this iconic classic romance, you’re in for a treat because it’s simply fantastic. Audrey Hepburn at her best!

Why You Should Watch: If you enjoy quirky comedies with romance, then you’ll enjoy this strange comic romantic adventure with a fabulous cast.

Amazon Synopsis: A classic tale of injustice, revenge and retribution, in which Edmond Dantes is falsely accused by three men of conspiring with Napoleon. Richard Chamberlain stars in this definitive adaptation of Alexandre Dumas’ perennial favourite novel.

Why You Should Watch: Fans of classic literature should definitely check out this Emmy-winning adaptation of the novel.

Amazon Synopsis: Brennan (Colin O’Donoghue – The Rite, Once Upon a Time) was a stranger in Nashville, a broken down musician currently on a business trip for a soul-sucking corporation. Everything changes when he finds himself reunited with Nora (Kristen Gutoskie – Containment, The Vampire Diaries, Beaver Falls), the girl who crushed his heart a decade prior.

Why You Should Watch: For Colin O’Donoghue, of course! Fans of Hook will want to check out this indie romance.

Amazon Synopsis: Nominated for seven Academy Awards and winner for Best Director, this groundbreaking and “wildly hilarious” (The Boston Globe) social satire launched the career of two-time Oscar-winner Dustin Hoffman and cemented the reputation of acclaimed director Mike Nichols. Pulsating with the rebellious spirit of the ’60s and a haunting score sung by Simon and Garfunkel, The Graduate is truly a “landmark film” (Leonard Maltin). Shy Benjamin Braddock (Dustin Hoffman) returns home from college with an uncertain future. Then the wife of his father’s business partner, the sexy Mrs. Robinson (Anne Bancroft), seduces him, and the affair only deepens his confusion. That is until he meets the girl of his dreams (Katharine Ross). But there’s one problem: she’s Mrs. Robinson’s daughter!

Why You Should Watch: The film’s become iconic for a reason. The Graduate is expertly written with award-winning performances and includes a memorable romance as well.

Content Note: PG though would likely be PG-13 if rated now.

Amazon Synopsis: Victor Hugo’s classic tale of pursuit and revenge in which Jean Valjean, a handsome young woodcutter, is cruelly sentenced to jail for stealing a loaf of bread he took to feed his starving family. Javert, the ice-cold Inspector of Prisoners, who relentlessly persecutes Valjean, is determined to keep him imprisoned for life.

Why You Should Watch: While I haven’t seen this adaptation, some argue it’s one of the best!

Amazon Synopsis: When aspiring magazine writer Sophia Marcus and would-be restauranteur Victor fly from New York to Italy for a vacation, the stage seems set for some much-needed romance in their relationship – especially since their destination is the city of Verona, home of the star-crossed lover Juliet Capulet of Romeo & Juliet fame. But Victor is far more interested in finding suppliers for his future restaurant than in wooing Sophia, who ends up getting a vicarious romantic fix from an unlikely source; she joins a group of volunteers who respond to letters that pour into Verona from around the world – letters to Juliet seeking advice about love. One such letter that Sophia responds to dates back to 1951 and came from one Claire Smith, an Englishwoman who fell in love with a young Italian man in her youth but let the opportunity slip away.

To Sophia’s surprise, her letter inspires Claire, now a grandmother, to travel to Verona in search of her long-lost love – accompanied by her grandson Charlie. With Victor wrapped up in his culinary quest, Sophia, Charlie and Claire scour the beautiful Italian countryside in search of Claire’s long-lost love. In the process, romance blossoms in unexpected ways, eventually facing Sophia with the very advice she wrote in her letter to Claire. Will she find the courage to seize love or – like Claire – spend a lifetime regretting the road not taken?

Why You Should Watch: If you enjoy unabashedly sweet romantic comedies/dramas, then you’ll LOVE this cute movie. Plus, it has a great cast.

Why You Should Watch: This is the perfect miniseries to watch if you’re a fan of period dramas. Not only will you recognize period drama favorite actors when they were young, but you’ll also enjoy a great story.

Amazon Synopsis: A man’s search for his one true love, whose birth he assisted in as a five-year-old.

Why You Should Watch: Fans of Jude Law should enjoy this cute romance! 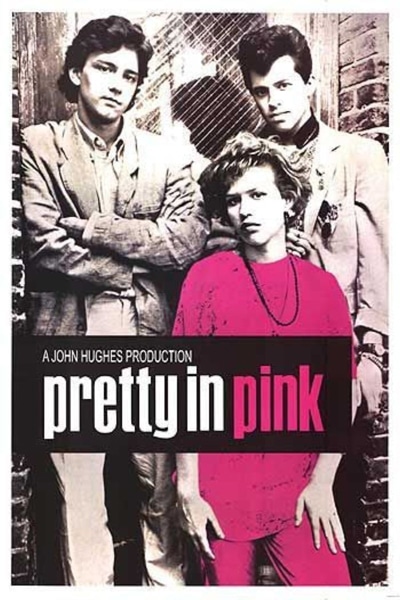 Amazon Synopsis: Teen sensations Molly Ringwald (Sixteen Candles, The Breakfast Club) and Andrew McCarthy (St. Elmo’s Fire) drew raves for their starring performances in this hit love story by John Hughes (The Breakfast Club, Ferris Bueller’s Day Off). She’s a high school girl from the wrong side of town. He’s the wealthy heart-throb who asks her to the prom. But as fast as their romance builds, it’s threatened by the painful reality of peer pressure. A bittersweet story with an upbeat ending and a phenomenal rock score, Pretty in Pink also stars Harry Dean Stanton, Jon Cryer, James Spader and Annie Potts.

Why You Should Watch: It’s one of the best romantic teen comedies out there!

Amazon Synopsis: Steve Wilde has never performed a selfless act. But why should he – he’s rich! The son of an oil tycoon, Steve hasn’t had to work a day in his life and has always gotten everything he’s wanted – with one exception: the love of Emmy.

Why You Should Watch: This short-lived romantic comedy series is worth watching for the humor and especially Keri Russell!

Amazon Synopsis: Bella Swan (Kristen Stewart) doesn’t expect much when she moves to the small town of Forks, Washington, until she meets the mysterious and handsome Edward Cullen (Robert Pattinson)- a boy who’s hiding a dark secret: he’s a vampire. As their worlds and hearts collide, Edward must battle the bloodlust raging inside him as well as a caterie of undead that would make Bella their prey. Based on the #1 New York Times best-selling sensation by Stephanie Meyer, Twilight adds a dangerous twist to the classic story of star-crossed lovers.

Why You Should Watch: While I think the first film is the best of the saga, if you enjoy YA paranormal romance, it may be time to revisit this cultural phenomenon in its 10th year anniversary.

Amazon Synopsis: When a young Amish woman and her son get caught up in the murder of an undercover narcotics agent, their savior turns out to be hardened Philadelphia detective John Book.

Why You Should Watch: The star-crossed romance is captivating and Harrison Ford is always fantastic.

Amazon Synopsis: The shocking true story of the first British politician to stand trial for conspiracy to murder. Jeremy Thorpe (Hugh Grant), the leader of the Liberal party, has a secret he’s desperate to hide. His ex-lover Norman Scott (Ben Whishaw) is putting Thorpe’s brilliant political career at risk so Thorpe schemes and deceives until he realizes there’s only one way to silence Scott for good.

Why You Should Watch: While not a romance, this period drama based on a true story has an all-star cast, fantastic reviews, and is written by Doctor Who‘s Russell T. Davies.

Available on Amazon: Available as of yesterday, June 28th!

Our romance-themed entertainment site is on a mission to help you find the best period dramas, romance movies, TV shows, and books. Other topics include Jane Austen, Classic Hollywood, TV Couples, Fairy Tales, Romantic Living, Romanticism, and more. We’re damsels not in distress fighting for the all-new optimistic Romantic Revolution. Join us and subscribe. For more information, see our About, Old-Fashioned Romance 101, Modern Romanticism 101, and Romantic Living 101.
Pin this article to read later! And make sure to follow us on Pinterest.
By Amber Topping on June 29th, 2018