Revisiting “classic” films is always a fun pastime for film aficionados. Even more fun is revisiting them during a big anniversary shebang. 2018 marks forty years for the classic musical, Grease and today we want to mark this milestone. A peppy, feel-good musical, Grease makes its viewer happy and is imprinted on the hearts of many fans.

The story begins with a summer romance between Sandy and Danny, two strangers who part assuming they’ll never see each other again. Sandy is set to return to her homeland of Australia, and Danny returns to his gang, the T-Birds. Then the school year begins, and much to the surprise of both Sandy (Olivia Newton-John) and Danny (John Travolta), Sandy now attends his school!

However, things become awkward between them when Danny mistreats Sandy. For a cool kid T-Bird, the sweet and innocent Sandy just isn’t the kind of girl a T-Bird dates. But as the school year goes by, with the help of friends, these two discover their “summer lovin’” is tough to deny. 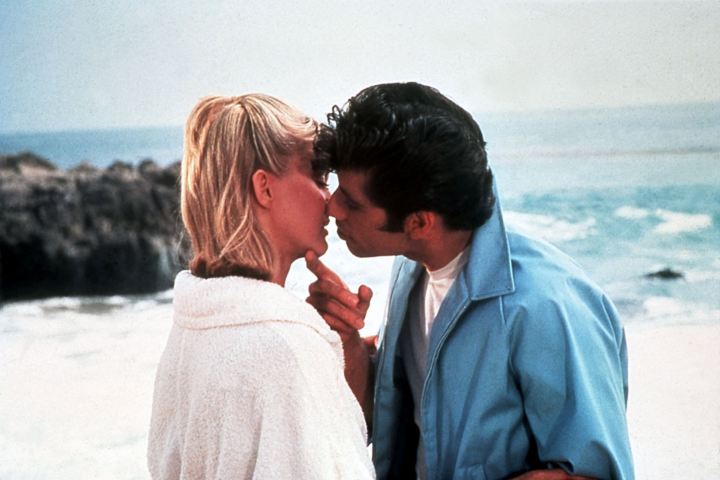 One of the most popular films of its time (and the highest grossing film of 1978), this musical extravaganza is short on character building but big on personality. Each musical number is entertaining and full of colors. The swish of the girl’s skirts and shine of the boy’s leather jackets adds period authenticity to the numbers, as does the cool cars.

Many a fun fact follow this film. One of which is that ‘Hopelessly Devoted to You’ filmed after the production wrapped. Good thing it makes the final cut as it scored the film an Oscar nomination. The film is also featured on AFI’s Greatest Movie Musicals list. As one more added fun bit of movie trivia, this has also eclipsed a 13-year record held by Sound of Music as the “highest-grossing musical ever” (globally). All facts that impress.

Whether you like classics or not, Grease is a film anyone who likes old-fashioned storytelling and romance is sure to enjoy. It’s a toe-tapping production that is hard not to like.

Content: though only rated PG, this film does contain some sexual innuendo, particularly in the musical numbers. There’s talk about making out, going to “third base,” and a teen pregnancy. Today, it would be rated PG-13.

Where to Watch: You can rent or own Grease with Amazon Video, iTunes or purchase it on DVD and Bluray.

Our romance-themed entertainment site is on a mission to help you find the best period dramas, romance movies, TV shows, and books. Other topics include Jane Austen, Classic Hollywood, TV Couples, Fairy Tales, Romantic Living, Romanticism, and more. We’re damsels not in distress fighting for the all-new optimistic Romantic Revolution. Join us and subscribe. For more information, see our About, Old-Fashioned Romance 101, Modern Romanticism 101, and Romantic Living 101.
By Rissi JC on June 18th, 2018