It’s in the little realizations that make me feel old. One such fact is that Mulan is turning 20 years old today. Most days I don’t consider myself so, but when you realize that one of the animated films from your childhood is 20 years old, this feeling invades. Seeing 1998 as the film’s release seems strange, too because it’s always been one of Disney’s “newer” films in my mind. But here we are in 2018, and with this milestone, I take a trip down Disney memory lane.

The story’s Disney iconic. We meet the awkward Mulan (voiced by Ming Na-Wen, who plays Agent May on Agents of S.H.I.E.L.D), a young woman who desperately needs to impress the Matchmaker. If she isn’t able to impress the woman and secure a good marriage, it will mean dishonor for her family. Unfortunately for Mulan, disaster is the result, and she walks away without a match. Her one chance to redeem herself presents itself when the Chinese army conscripts one man from every household. In consideration of her father’s failing health, Mulan impulsively decides to accept the commission. As her father and without his knowledge, she disguises her gender and fights to redeem honor to her family.

I have no memories of seeing this film for the first time, but as I re-watched the movie, it felt like I was seeing it with fresh eyes. As an adult, I enjoy animated films, but they aren’t my typical cup of tea. Like musicals, I have to be in the right mood to want to revisit the cheesy gloriousness that is animated films. While its animation may not be as sharp as that of its peers today, Mulan is still a lovely experience. 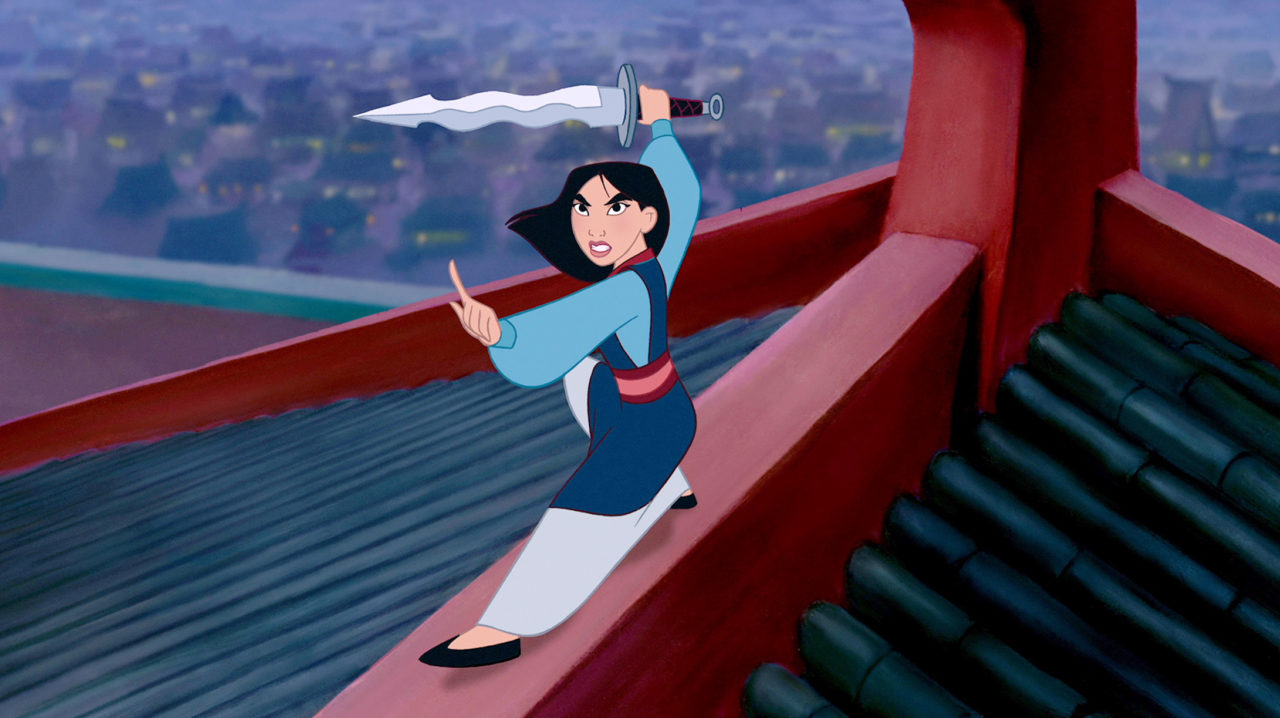 The animation in the film is quite striking. I don’t know the technical terms to describe it, but the coloring is beautiful (in particular the apple blossom scenes). It’s always reflective of the mood or experiences the scene should put the viewer in. The “movement” and perspectives aren’t always perfect, and yet regardless of this, it isn’t off-putting. Speaking in terms of production, this one is impressive and though much advancement has been made, creators deserve commendation for how they bring this world to life. Likewise, the music is gorgeous and fun. Similarly, the lighthearted teasing between Mulan’s comrades keeps things cheerful.

Perhaps the greatest appeal of this film is its tendency to rule break its plot. The story doesn’t conform to the typical Disney trademarks (especially of this era) and breaks some traditional story cues. Mulan isn’t a princess pining for true love. Instead, she’s a spunky girl whose good intentions may lead to her demise. A sacrifice she’s willing to make if it means returning honor to her family name, and more importantly, her father. This relationship is another strong plot thread. Even the mere thought of dishonoring her father brings Mulan pain. Because it’s an animated film, this isn’t a deep dive into the bond between a father and daughter, but what’s there is sweet.

As I look back on this film and experience it through the eyes of an adult, it’s with confidence that I say Mulan is a favorite Disney film. Despite its plot and darker themes, Disney cannot hide its charms. It keeps to traditions by the introduction of a feisty heroine who also fits comfortably into today’s society. With whispers that a live-action adaptation of Mulan is in the works, if anything, revisiting this animated adventure is a reminder of the simmering excitement there is to experience this story in, what I know will be, an epic adaption.

Do you have a favorite memory of seeing Mulan? Is it among your favorite Disney films? Do you plan to re-watch this one for its anniversary? Sound off below with your thoughts on this film or the upcoming live-action film.

Where to watch: You can purchase Mulan on Amazon Video, DVD/Bluray or stream it through Netflix.

Content: there is a scary scene or two, and tense situations involving the war. Also, the villain, who is quite creepy, might be disturbing for young viewers. The film is rated G.

Our romance-themed entertainment site is on a mission to help you find the best period dramas, romance movies, TV shows, and books. Other topics include Jane Austen, Classic Hollywood, TV Couples, Fairy Tales, Romantic Living, Romanticism, and more. We’re damsels not in distress fighting for the all-new optimistic Romantic Revolution. Join us and subscribe. For more information, see our About, Old-Fashioned Romance 101, Modern Romanticism 101, and Romantic Living 101.
By Rissi JC on June 5th, 2018