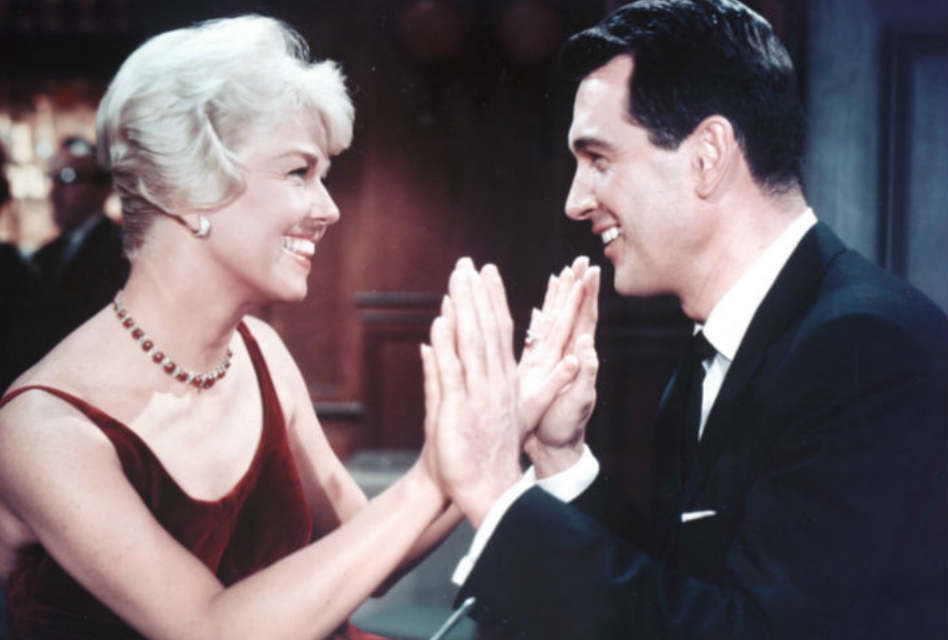 Pillow Talk introduced to the world for the first time, the popular, beloved pairing of Doris Day and Rock Hudson. It also re-invigorated the genre of romantic comedy during the 1960’s and provided a proven formula that attracted new audiences.

Jan Morrow’s an interior decorator who’s living the dream in New York City, except for one major annoyance: She’s stuck sharing a phone line with the egotistical, womanizing bachelor Brad Allen, a man Jan’s never met. Brad’s a Broadway songwriter who works from home. He ties up their shared phone line at all hours with his multiple affairs. All of Jan’s efforts to regulate the use of the phone meets Brad’s mocking refusal.

One evening, purely by accident, Brad catches a glimpse of Jan while they’re both out on separate dates. He’s shocked to find that the woman he has been arguing with is actually not the plain prude he assumed she was. Knowing Jan’s opinion of him, Brad concocts a false identity as a tourist from Texas and rescues her from her drunken date.

Jan’s thrilled to finally meet a handsome man she feels she can trust and who treats her respectfully. As Brad and Jan spend time together, her attachment to “Rex Stetson” grows.  While Brad’s dating Jan using his alter ego, he also continues to pester Jan as himself over their shared phone line.

At the same time, Jan continues to receive marriage proposals from her wealthy client, Jonathan Forbes. Jonathan’s head over heels for Jan. When Jonathan discovers that his close friend Brad Allen’s playing his tricks on the unsuspecting Jan, he decides to take action.

Jan: Mr. Allen, this may come as a surprise to you, but there are some men who don’t end every sentence with a proposition.

THAT MAGICAL PAIRING OF DORIS DAY AND ROCK HUDSON

Though Doris Day’s most famous today for her romantic comedies, when Pillow Talk was released, she was better known for her musical films and singing career. Her performance as Jan Morrow was the first of many which solidified her as an expert comedienne. Watching the film, it’s easy to see why. Her timing’s perfect, her reactions flawless, her wardrobe enviable. Plus, no one could ever pull off being both cute and sexy quite like Doris Day. Seriously, her expressions of anger remind me of an enraged kitten, spitting but harmless. Pairing her with the tall, dark and handsome Rock Hudson was also a stroke of genius. His dark good looks and devil may care attitude is the perfect counterbalance to her prim, ladylike independence.

The plot of mistaken identity or dual identities worked so well that it became a template for the second pairing of Doris Day and Rock Hudson in Lover Come Back. It may seem a bit silly and ridiculous, but this is exactly what makes Pillow Talk so much fun. Brad and Jan begin as antagonists only for him to change his mind when he learns the woman he’s been arguing with is exactly the kind of woman he is attracted to! I almost feel sorry for Jan as her trusting, naïve nature leads to her easy deception and seduction. But that is what makes the Day-Hudson comedies so great. Though it appears the hero has the upper hand, in the end, it’s always the heroine who comes out ahead, with the hero being effectively neutered.

Brad Allen: Look, I don’t know what’s bothering you, but don’t take your bedroom problems out on me.

Jan: I have no bedroom problems. There’s nothing in my bedroom that bothers me.

OTHER HIGHLIGHTS OF PILLOW TALK

Tony Randall’s inclusion as a supporting character is a highlight of this comedy. His contribution cannot be underrated as he’s often given some of the best dialogue. Randall’s the perfect choice to round out the casting trifecta. His ability to play the straight man while delivering some of the most ridiculous lines with a straight face helped make Pillow Talk the surprise success it was.

The stellar supporting performance of Thelma Ritter is another one which makes Pillow Talk slightly more memorable than the other two Hudson/Day collaborations. Ritter plays Jan’s perpetually hungover housemaid Alma, who eavesdrops on Brad’s phone escapades.  Ritter has long been considered one of the best character actresses to ever grace the screen. Who else could play a middle-aged lush who lives vicariously through a playboy’s romances without being creepy or repulsive? Surprisingly, Alma offers Jan wise advice and gives Brad a creative idea on how to win Jan back. Sadly, unlike Tony Randall, Ritter was not part of the subsequent two Hudson/Day comedies.

Pillow Talk‘s an innocent but sexy comedy which is still highly entertaining. Its success helped kick off a spate of similar films and reignited the demand for romantic comedies. Though somewhat dated in style and tone, it also remains modern in the way it subverts the expectations between men and women. It tackles the changing mores of its’ time while also poking fun at them, proving that Pillow Talk is a film which can stand the test of time despite its’ flaws. After all, laughter never goes out of style.

CONTENT NOTE: Though there are a few suggestive comments and scenes of drunkenness, Pillow Talk is otherwise pretty clean.

WHERE TO WATCH: Buy on DVD or rent from Amazon or iTunes.

Have you seen any of the Doris Day and Rock Hudson films? Do you have a favorite classic romantic comedy?

88shares
We use cookies to ensure that we give you the best experience on our website. If you continue to use this site we will assume that you are happy with it.OkNoPrivacy policy