Into The West (2005): A Thoughtful Journey Into The American Past 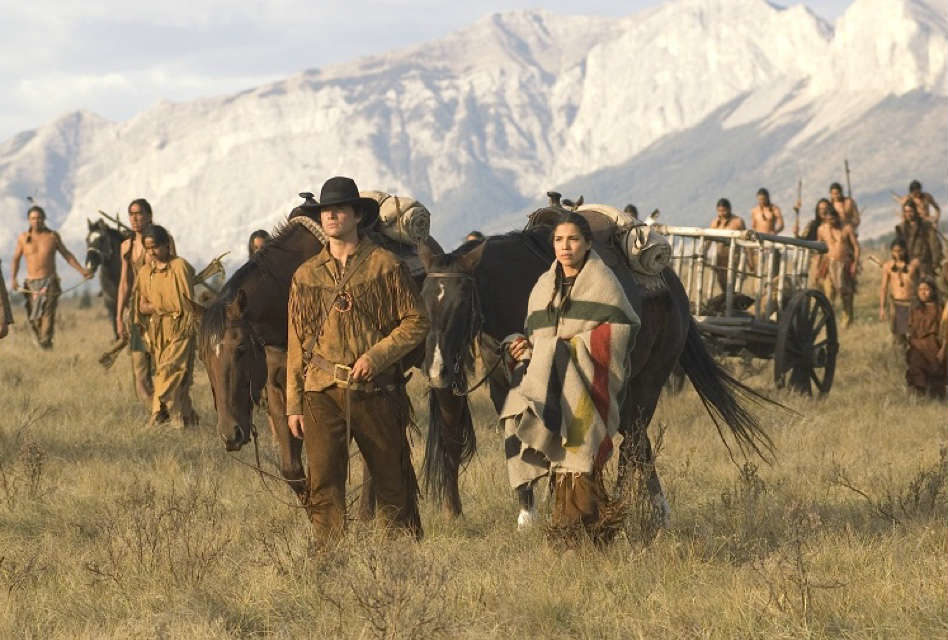 Into the West is a six-part miniseries which aired on TNT in 2015. Each episode comprises of two hour films by different directors. The epic was produced by legendary filmmaker Steven Spielberg and features cameos by numerous well known actors. Into the West is a story about western expansion and covers its growth between roughly 1825 to 1890.

Wheel to the Stars

As with most stories chronicling the human experience, people are driven from complacency by their desire to secure a better life. This need underpins the stories that zigzag across Into the West. It’s a sprawling tale with interwoven families, friends, lovers and enemies. At its core, however, Into the West is about the American settlers who move out west and encounter the native inhabitants of the land, changing the lives of the locals forever as it weaves a complex, multi-generational story.

Into the West introduces us to two families – the Wheelers, a white family from Virginia and a Lakota family from the Great Plains. Matthew Settle plays Jacob Wheeler, a young man who dreams of a life beyond the family business. When opportunity presents, Jacob runs away and heads west in order to satisfy his need for adventure. At this point, the Wheeler family’s destiny begins to parallel that of the Lakota.

In juxtaposition to the Wheelers, the narrative introduces Loved by the Buffalo (Simon R. Baker), a young hunter who discovers he has the gift of foresight. Navigating the complexity of his community, we meet the Lakota at a time when their lifestyles are unchallenged by the impending arrival of western pioneers. Jacob eventually meets Loved by the Buffalo when he marries his sister, Thunder Heart Woman (Tonantzin Carmelo). The union ensures the interconnectedness of their lives as it continues to parallel. 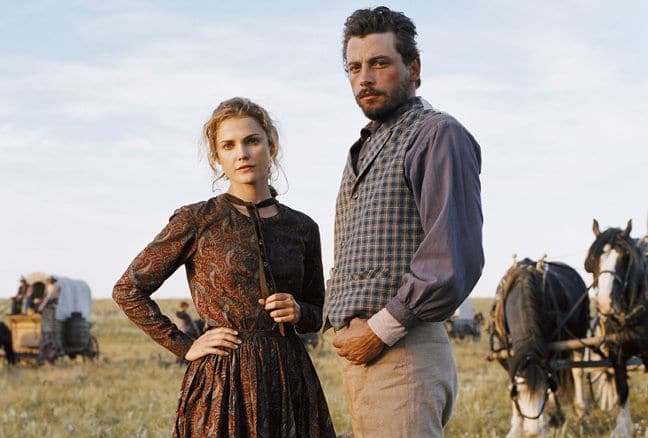 Each episode of Into the West does well to balance the storylines between the native tribes and the white pioneers. The series, however, is massive in scale and characters. Each episode introduces the audience to new faces – some with more screen time overall. That being said, Jacob and with Loved by the Buffalo are the constants around which the story revolves. Their lives radiate outwards and create the rich tapestry that span years as the series progresses.

The parallels in the story, as well as the symbolism of the wheel (the characters’ interconnectedness) remain strong throughout the twelve hour run. For example, the story explores the complexity of brothers who cannot see eye to eye from the Indian and settler’s perspectives, as well as the role of women and sexual slavery.

Among the notable story lines is that of Kerri Russell who plays Naomi Wheeler, Jacob’s cousin. Stubborn and headstrong, she was unlucky in love and chooses to venture west with Jacob when he returns home years after his initial departure. Naomi’s character deals with massive change and tragedy as she loses her husband and is eventually sold into slavery. Naomi’s story takes an interesting turn however. Prairie Fire (Jay Tavare), a handsome tribesman saves her from being sold and she lives among the Lakota, essentially building an entirely new life.

In addition to this, Into the West explores the Transcontinental railroad, outbreaks of smallpox and cholera, numerous battles, the gold rush and life on an Indian reservation.

Also as mentioned, numerous well known actors make cameos in Into the West. I would advise not forming an attachment to any of them, as in most cases, their appearances are blink and you’ll miss it moments. Among the nuggets are Balthazar Getty, Alan Tudyk, Gary Busey, Keith Carradine and Beau Bridges.

While Into the West is a beautifully made, wonderfully acted epic western – it has some stunning visual shots – the time to get through the show is felt. The story line tends to drag at times as the pacing slows to a near standstill. While it’s obvious the filmmakers’ intention is to demonstrate the pace of life on the frontier, as a viewer, there are episodes that are hard to get through. Due to the large ensemble cast, you might also find yourself more or less interested in certain story lines. This means that you might spend an episode or two anxiously waiting for your faves to have their turn in the spotlight.

Despite that however, Into the West is very respectful of the Native American culture it attempts to portray. For example, characters all speak their indigenous languages, translated via subtitles. As a consequence of the large cast, however, characters suffer from a lack of development. Despite the mammoth twelve hour run time, you could very well leave the show feeling dissatisfied with the outcome.

Overall, Into the West has some incredible moments. It contains many elements that come together to create a largely satisfying western. Into the West was nominated for a staggering 16 Emmy Award nominations in 2006 – the most nominated show for that year. It won two awards, the most notable for the score.

Where to Watch: Into the West is available for purchase on Amazon (US) and can be streamed on YouTube.

Content Note: This series is unrated. Note that there are scenes of violence, implied sexual violence, the use of profanity and numerous adult themes.

Have you watched Into the West? If you have, what did you think? Comment below and let me know!