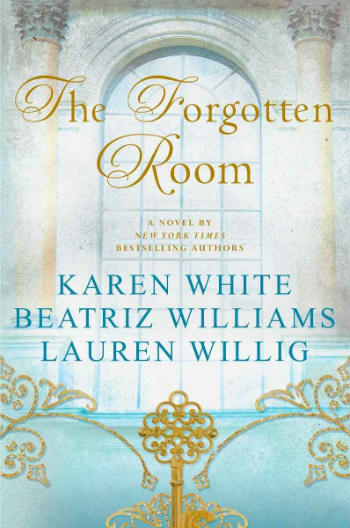 There are few authors whose books I buy before reading them, and Lauren Willig is one of those authors. And when I saw that she had written a novel with Karen White and Beatriz Williams, I got excited. The Forgotten Room did not disappoint.

A strange but wonderful hybrid of romance and mystery, the story of The Forgotten Room stretches across three generations of women, (Olive, Lucy, and Kate), and one unique New York house which ties each woman together even more. Having the house and the hidden attic room play such an important role in all three stories made the entire tale flow together well.

While each author wrote a different woman in the story, that doesn’t take away from the flow of the narrative. I thought it helped give each character her own unique voice. Each author is talented enough to achieve this on their own, but this made it even more clear. With Olive’s story beginning in 1892, Lucy’s set in 1920, and Kate’s set in 1944, this helped the three stand apart from each other a little more.

While Olive sets the story in motion, she also tries to solve a mystery. Lucy and Kate, on the other hand, both spend a large chunk of time piecing together the mystery of their family’s history. The answers they seek are found in Olive’s story, and in Lucy’s. The story gradually builds so that the ending sneaks up on the reader. Not to mention, the story includes quite a bit of fun and suspense because the reader learns most details as the characters do. With that in mind, I really can’t give you too many details, because it will spoil the story.

The main characters of The Forgotten Room are all strong but unique women. Olive is a young woman reeling from her father’s death, working in the home of the people who ruined him, the Pratts. She seeks revenge, but she is surprised when Harry Pratt walks into her life. Harry is a young artist who soon falls deeply in love with Olive, but the course of true love never did run smooth.

Lucy, Olive’s daughter, is living in a boarding house that used to be a mansion owned by a wealthy family, the Pratts. She doesn’t know who her family really is and begins to investigate her mother’s past and that of the Pratt family. Her charming boss, lawyer Philip Schuyler, and art dealer John Ravenel throw her orderly life into a tailspin.

While the stories of Lucy and Olive are told in the third person, the story of Kate, Lucy’s daughter, is told in the first person. The Pratt Family Mansion has been converted into a hospital, and Kate works there as the only female doctor. She faces comments from the other doctor, as well as from the nurses. However, when a critically injured soldier, Captain Cooper Ravenel enters the hospital and her life, things change. He seems to recognize her somehow, and the clue is in a miniature that has been passed down from his grandfather to his father, before becoming his. Will this third generation be able to figure things out?

With three main romances, there is a story for everyone to enjoy in The Forgotten Room. Personally, I loved the romance between Kate and Cooper the most. It seemed gradual enough to make sense to me. I will be honest, however, I also really loved Harry and Olive. At the same time, I knew who Lucy “should” have ended up with, and I did not particularly care for him, so I was actually fine with her ending.

The leading men, though all related in some strange way, were different enough to make each story seem fresh. Cooper and Harry were my favorites, though I also had a soft spot for Phillip. Each had a very different background, and their relationships with their fathers impacted them just as much as the leading ladies were impacted by their relationships with their mothers.

These three authors can transport their readers to very different times in history, following three very different women. As Lucy and Kate discovered the secrets of the Pratt Mansion, so do we. As they make difficult choices about their future, we watch and cheer them on, willing them to make the right choice.

I hope that Williams, White, and Willig write more novels together; this first one was a very enjoyable read. If you enjoy stories set in the 1890s, the 1920s, or the 1940s, there will be something in The Forgotten Room for you. Fans of mystery and romance, as well as people who enjoy stories about soulmates and love across social classes, should also not miss this novel. It’s a bittersweet historical romance that includes three mysteries, three romances, and some memorable characters.

You can buy The Forgotten Room on Amazon.

Content Note: There are some “fade to black” moments, as well as some drinking during Prohibition.

Have you read The Forgotten Room? Which story was your favorite? Let me know in the comments!

Our romance-themed entertainment site is on a mission to help you find the best period dramas, romance movies, TV shows, and books. Other topics include Jane Austen, Classic Hollywood, TV Couples, Fairy Tales, Romantic Living, Romanticism, and more. We’re damsels not in distress fighting for the all-new optimistic Romantic Revolution. Join us and subscribe. For more information, see our About, Old-Fashioned Romance 101, Modern Romanticism 101, and Romantic Living 101.
By Bailey Cavender on March 10th, 2018

2 thoughts on “The Forgotten Room: A Bittersweet Romantic Mystery”