THE MOMENT: Tempers flare, food flies and the truth comes out, as Joon and Claire hash it out.

THE QUICK OVERVIEW – INTO THE FANTASY

Dramaworld (2016) is a wonderfully light-hearted, funny and romantic dramedy set in the world of Korean dramas. Like Lost in Austen, a super fan of K-dramas (as opposed to Pride & Prejudice), Claire (Liv Hewson), magically ends up transported into her favorite K-drama.

This, naturally, throws a proverbial spanner in the workings of the drama, not the least of which is that Claire has a longstanding crush on the male lead, Joon Park (Sean Dulake).

Claire is not the first real person to fall into a K-drama and is promptly taken under the wing of fellow real-worlder, Seth (Justin Chon), who explains the rules of Dramaworld and Claire’s role in this world. Claire is a facilitator, appointed with ensuring that the drama runs as it should, that the appropriate events happen to the correct people, assisting but never interfering in the story’s flow.

But it all goes awry. Nothing is going as it should, and Claire is increasingly ending up in the leading lady role. The romantic story arc is being plagued by mysterious deaths and mishaps. And Joon Park is as heart-thumpingly beautiful in person as he is onscreen. And he’s making eyes at Claire, even saving her from an attack at one point. But the whole existence of Dramaworld itself is on the line, if Claire doesn’t get this story arc back on track.

THE LEAD-IN – PUTTING THE WHO IN WHODUNIT

After yet another main character has suddenly and uncharacteristically died, Claire – who’s been playing amateur sleuth – decides that she knows who’s done it. She thinks she knows who’s been viciously killing off characters in this drama to his own wicked ends.

So, off she goes to confront the supposed villain, namely, none other than the dashing leading man himself, Joon Park.

Coming directly from the funeral of Joon’s ex-fiancée – where Joon was conspicuously and guiltily absent – Claire finds a stricken Joon sitting outside in the alleyway behind his burned-out restaurant. Joon is still rather cross with Claire, since she admitted to setting fire to the restaurant. He’s been crying, grieving, setting out food for the dead as he speaks to them. The loss of his father and his ex-fiancée – both apparent suicides – weighs heavily upon him. He blames himself, thinking they killed themselves because of him.

And then Claire comes barreling down on him with her accusations. Let the rumble begin. Both begin more than letting just the accusations fly. Food soon joins the fray.

Joon: Are you on drugs?!

Claire: The only drug that I’m on is the truth.

Joon: That doesn’t even make sense!

Claire: Yeah, well, neither does killing your father! Or your fiancée! And then you save my life, so I won’t be onto you, but I’m onto you!

And here, Claire grabs some dumplings and throws them at Joon.

RELATED: TV REVIEW: LOST IN AUSTEN – A FUN TAKE ON PRIDE AND PREJUDICE

Joon: I didn’t kill anyone!

Joon grabs some dumplings himself and throws them right back at Claire.

It escalates from there. Murder accusations with accompanying tasty morsels fly from Claire. Joon parries with his own heated words and thrown bits. And even in the heat of the moment, Claire’s recognizing the unfoundedness of her accusations, but still she persists. 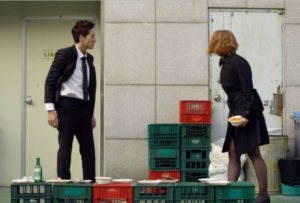 Claire: Well, why then would you save me? You ruined it! This whole place is screwed up because you saved me! You idiot! You big, stupid idiot!

And here Claire moves to the garbage bins to find a particularly juicy morsel of fermented cabbage, which she swings and lands with a resounding squelch on Joon’s cheek, as she yells: 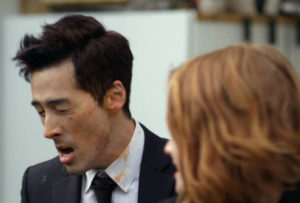 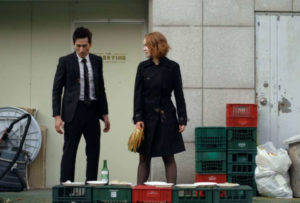 And, as with most eruptions, it suddenly stops. Joon and Claire stand looking at one another. They’ve just aired their griefs and exposed their vulnerabilities. And in the calm of the aftermath, they share a drink, and it all leads to some truth-sharing about their feelings for one another and even some reality-busting truths about the nature of Dramaworld. Nothing is the same after this. 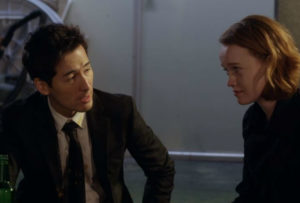 Hashing it out in the food-flying fray, Joon and Claire find one another. It’s pretty fantastic and funny, not to mention intensely romantic. What a decidedly lovely mess. Still hoping for a Season 2, because I want more of these two in Dramaworld!

Where to Watch: Netflix and Viki.

Our romance-themed entertainment site is on a mission to help you find the best period dramas, romance movies, TV shows, and books. Other topics include Jane Austen, Classic Hollywood, TV Couples, Fairy Tales, Romantic Living, Romanticism, and more. We’re damsels not in distress fighting for the all-new optimistic Romantic Revolution. Join us and subscribe. For more information, see our About, Old-Fashioned Romance 101, Modern Romanticism 101, and Romantic Living 101.
By Jessica Jørgensen on February 3rd, 2018