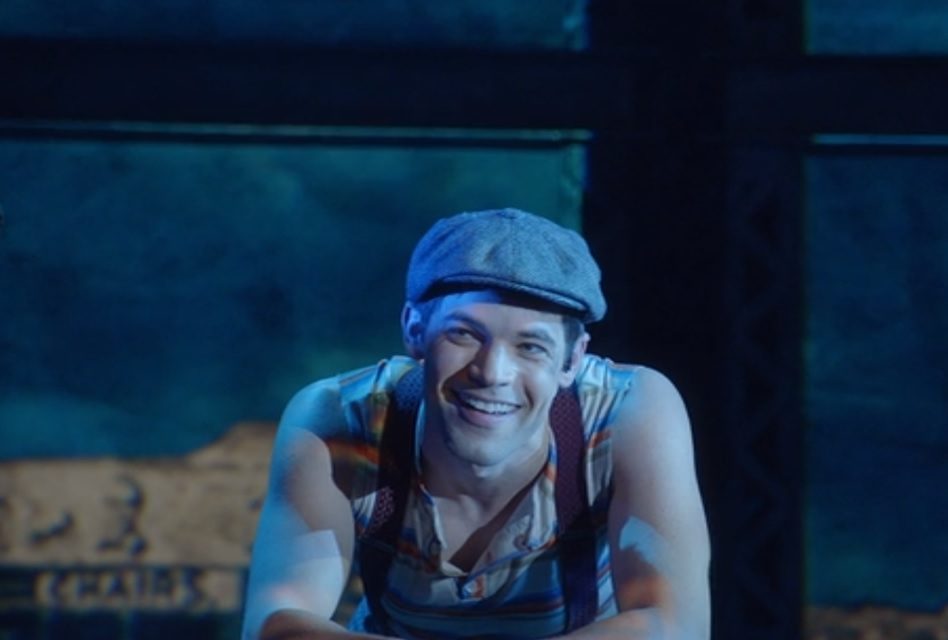 I love finding a new musical to adore! And with Newsies, I discovered a musical theater treat that everyone can enjoy, especially as it’s on film! Though technically not a new musical, as it’s based on the musical 1992 Disney film starring Christian Bale (totally worth a watch as well!), the Broadway version changed a few things making the story even more fun. There is something so thrilling and fun watching a musical on stage. 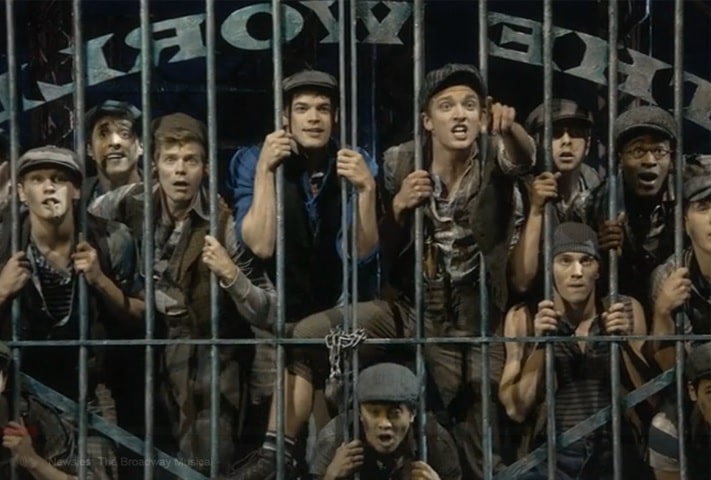 Jack Kelly and his gang of newsies wait for the day’s news headline reveal.

The story begins with Jack Kelly, a New York newspaper delivery boy – or newsie, introducing his friend Crutchie, a disabled newsie, to his little home on a rooftop. Jack tells him of his dream to leave New York and head to Santa Fe. The next day, things take an unexpected turn at the newsies’ work place. The newspapers raise their prices forcing the boys to sell more papers to make up for their losses. The ragtag gang of orphaned and homeless newsie boys band together under Jack Kelly’s charismatic leadership and Davey, the newest Newsie (no pun intended) and form a strike. They receive help from a young female reporter, Katherine Plummer. Together, they fight against the powerful publisher of the New York World, Joseph Pulitzer.

The classic tale of underdogs against injustice rings true even today and really brings home the powerful theme of the story. Add in the pathos of young boys in their teens or younger having to survive on their own, and who wouldn’t root wholeheartedly for these brave kids?

Of course, the most important factor of a musical is its music. Newsies doesn’t fail to delight with catchy tunes like Seize the Day, Something to Believe In, I Never Planned on You/Don’t Come A-Knocking. Alan Menken and Jack Feldon put the musical score together and each won a Tony Award and Drama Desk Award for their awesome composition and lyrics. Also, I adore Alan Menkin’s music. He’s a total Disney staple and created the scores for The Little Mermaid, Beauty and the Beast, Aladdin, Pocahontas and more. Jack Feldman wrote lyrics for several animated films including Thumbelina, Oliver & Company and The Lion King 2.

Along with the wonderful music, the choreography was fabulous. In fact, Christopher Gattelli won a Tony Award and Drama Desk Award for the choreography and for good reason. The movements and dances really brought an electricity to the stage. And the scene transitions were incredibly timed.

The talent in this Broadway musical blew my mind. From singing to dancing, everyone’s part was totally flawless. Though I haven’t seen endless onstage musicals, the choreography stunned me. It’s a blast to watch all the energy onstage.

The story is really fun and every character charmed the audience including the lead, Jack Kelly. Rough and cocky, Jack hides an enormous heart underneath all his big talk. He loves his gang of newsies fiercely. So much so that leading them to fight back against the powerful cuts his heart up. 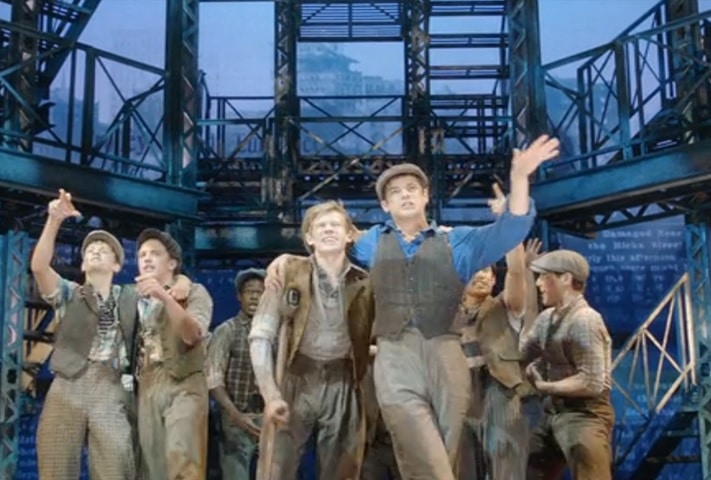 Jack and Crutchie with their newsie pals

I loved watching the inexperienced newsie Davey become Jack’s other half. Despite Davey’s quieter, more introverted nature, he brings a strong passion for following what’s right no matter the cost. Jack often asks Davey to speak for him when he can’t find the words he’s searching for. Davey’s younger brother, Les, takes to the newsie life like a fish to water. He is truly the cutest little newsie ever. He also adorably hero-worships Jack to no end. Crutchie adores Jack as well and the two are close enough to be brothers. There are dozens of other newsies in the cast, all as delightful as the main leads.

Katherine Plummer matches Jack’s passionate nature with her own bold tongue and stubborn streak. She and Jack continually get into verbal spars. Their hate-to-love romance is very fun to watch. I especially love their “love” song Something to Believe in. Finally, Joseph Pulitzer brings us a slick businessman villain who puts his company’s bottom line above the respect or interests of his employees.

Disney really pulled together a fabulous cast, especially in the leading actor Jeremy Jordan. Nominated twice for Best Performance by a Leading Actor in a Musical, Jeremy Jordan just wholeheartedly becomes the role of Jack Kelly onstage. He’s been in other musicals including Finding Neverland and West Side Story but you will probably recognize him as Winn from the currently airing Supergirl TV series.

Overall, if you love musicals, Disney, or just New York accents and Newsie hats (don’t we all??), then check out Newsies: The Broadway Musical! You can find it on Netflix, rent/buy on Amazon.

Have you seen Newsies the Broadway version or the 1992 film? Let me know in the comments!