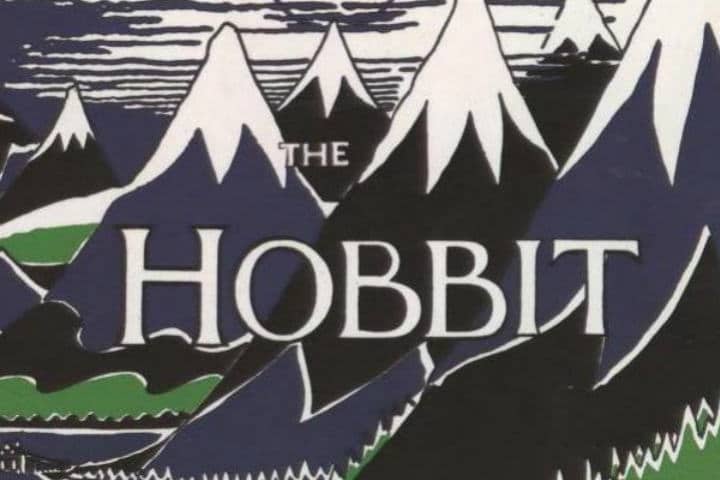 Classic Book Review: The Hobbit, or There and Back Again by J.R.R. Tolkien

This past fall, The Hobbit celebrated its 80th anniversary of publication. The Hobbit was critically praised on its publication in 1937 and has never been out of print since. It is a modern-day classic and the introduction to Tolkien’s expansive fantasy world, Middle-earth. Epic sequels and Middle-earth mythologies have followed. Generations have been inspired and entertained by these stories. It’s an international phenomenon.

When a Hobbit Leaves His Hole

The Hobbit, or There and Back Again tells – as the title suggests – the story of a hobbit, who embarks on a journey and comes home again. Bilbo Baggins lives a comfortable, foreseeable existence in his hobbit hole in The Shire. He savors his routines, his pipe, his well-stocked larder. Hobbits do not venture out of The Shire. But when the wizard Gandalf shows up at his door rather unexpectedly, adventure – quite literally –comes a-knockin’.

“This is a story of how a Baggins had an adventure, and found himself doing and saying things altogether unexpected. He may have lost the neighbours’ respect, but he gained – well, you will see whether he gained anything in the end.”

Bilbo gets roped into a quest with a party of dwarves, who are out to oust a dragon from their birthright and ancestral home, the Lonely Mountain with its mountains of treasures. Thorin Oakenshield, heir to the kingdom under the mountain, is the leader of this group. Gandalf has told that dwarves that Bilbo is an accomplished burglar. He is not, but – as anyone familiar with the archetypical hero’s journey could tell you – he learns more than a few things on his journey, some rather helpful in the art of thievery. By the time Bilbo returns, he is quite a changed hobbit.

RELATED: FILM REVIEW: THE HOBBIT: THE DESOLATION OF SMAUG

I won’t go into all the plot points, but on the journey to the Lonely Mountain, there are trolls and goblins, elves and giant spiders, wolves and giant eagles, a shapeshifter, a magic ring, mysterious moon runes, one deadly dragon and a war. There are mishaps and near misses and tight escapes and deaths. Profound at times, funny at others, always exciting, it’s a very fine adventure.

There is no romance here; it’s all bromance. This is story of a band of brothers, learning to trust one another, rely upon one another, love one another. It’s about friendships being forged and tested and failing sometimes. And it’s also about redemption.

The Doorway to Middle-Earth

As the doorway into Middle-earth, The Hobbit is a rather tightly contained narrative, an episodic novel that doesn’t weave a whole lot of mythic and genealogical backstory into its frame. The Lord of the Rings has plenty of that – backstory, that is, genealogical tangents and cosmological asides. So, while much of Tolkien’s further adventures in Middle-earth are epic in nature, The Hobbit remains focused on one little, yet daring, adventure. Something exciting happens in every chapter – creatures are encountered, problems arise, dangers abound, solutions are found. It’s a great children’s book, highly suited to reading aloud.

RELATED: THE LORD OF THE RINGS TRILOGY REVIEW: IN A WORD – PERFECTION

Bilbo Baggins is a wonderful character, a childhood favorite of mine. His transformation from the reluctant, scared, nervous, uncertain, little hobbit to a confident creature, open to the world and its many possibilities, is, well, classic. He is very easy to identify with. The dwarves – there are thirteen of them – are mostly stock characters, with Thorin and Balin being the most developed. Thorin is proud and exacting, harsh at times, generous at others. Balin is a kind, wise soul, often seeking to temper Thorin’s anger and arrogance.

“There is more in you of good than you know, child of the kindly West. Some courage and some wisdom, blended in measure. If more of us valued food and cheer and song above hoarded gold, it would be a merrier world.”

The Hobbit marks the first appearance of the pitiful creature Gollum, whose riddling contest with Bilbo is a highlight in the book. Gollum is a perpetual favorite. I can still hear my mother reading aloud, in her own Gollum voice (this was long before the movies and Andy Serkis’s portrayal), saying, “My precious.” Gollum’s very dialogue demands the reader to make a voice for him. And that’s rather fantastic, a credit to Tolkien’s writing.

And the writing in The Hobbit is indeed sharp. It’s witty and funny and casually down-to-earth. It remains as fresh and engaging as ever. Middle-earth remains a destination to explore. The plot is thematically textbook, but well executed and fast-paced. Our hero is lovable; you’re rooting for him. Yeah, The Hobbit is not a classic for nothing. And it stands up well to re-reading (-:

RELATED: ROMANTIC MOMENT OF THE WEEK – THE STAR CROSSED EPILOGUE OF TAURIEL AND KILI

It’s already been done, twice. The first, in 1977, was an animated production by the renowned production company Rankin/Bass and animated by Topcraft (the precursor to Studio Ghibli). It’s a musical, where much has been chopped, but – needless to say – the animation is quality stuff. More recently, film director Peter Jackson – after his huge success adapting The Lord of the Rings to film – took on The Hobbit. The very focused and self-contained narrative was turned into a three-film epic, with lots of additions and backstories and asides and tangents, including the rise of Sauron and even a little romance. Martin Freeman is a delightful Bilbo, and who else could play the brooding and somewhat brutal Thorin Oakenshield other than Mr. Thornton himself, Richard Armitage. He makes for one, very fine dwarf.

You can buy the book to read on Amazon or other bookstores.