Timeless: A Timeless Treat of a TV Series That You Should be Watching 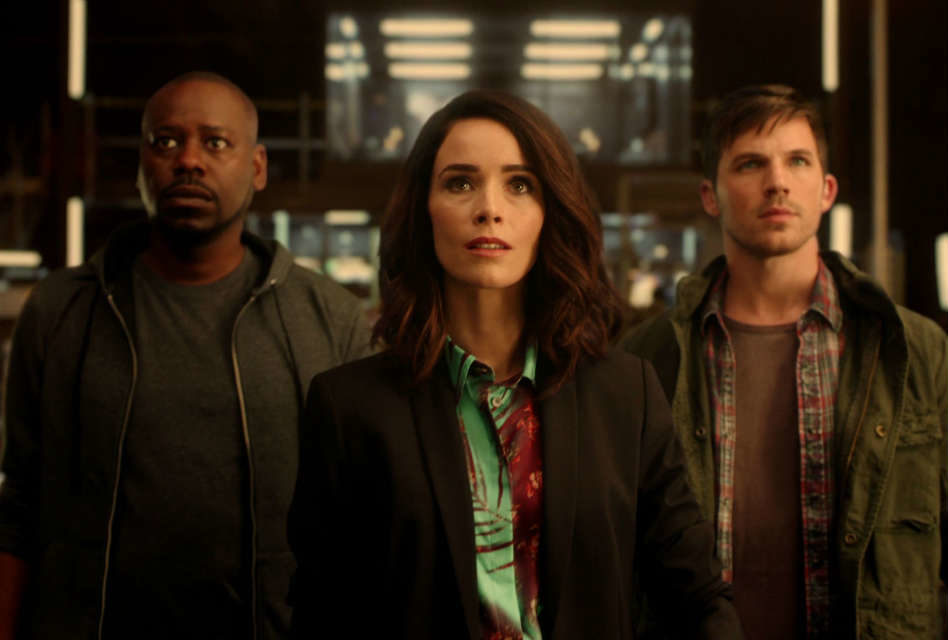 If you haven’t been watching NBC’s Timeless, you should be. I just binge-watched the first season on Netflix UK, and I am hopelessly smitten. Timeless is an American, sci-fi, time travel, adventure series that follows a trio of resolute and, sometimes, rather reluctant time travelers, as they seek to stop a nefarious villain from ravaging history, thereby altering the present. Yeah, that about sums it up in a nutshell, but there is so much more going on. Think Quantum Leap, MacGyver, The X-Files, Indiana Jones (and I’m dating myself with those references, I know), with lots of existential ponderings, conspiracy theories, nuanced malice, great costumes and sets, and, yeah, one long, slow burn romance that gets you right in the ticker. You’ll be shipping Wyatt and Lucy, I promise you!

The Science Nerd, the History Prof, and the Elite Soldier

A time machine – the mothership – is stolen by one deliciously, Byronically brooding Garcia Flynn (Goran Višnjić – Luka for old E.R. fans!), one maliciously vulnerable guy, who also absconds with the ship’s pilot and inventor, Anthony Bruhl (Matt Frewer). He’s out to wreak havoc in the past in order to remedy apparent injustices in the present. I won’t spoil all the plot points here. But maybe there’s more to it than readily meets the eye.

Hoping to thwart Flynn’s plans, Connor Mason (Paterson Joseph), owner of the said time machine and ambiguous mystery man, calls in the feds, who hastily put together a crew to go after Flynn. The rattling, rickety, time machine prototype, the so-called Lifeboat, is pulled into action. The two time machines are connected, so each group knows when the other is on the move and has a general sense of where the other is going. But only three people can be in the Lifeboat capsule at one time. And one has to be the pilot.

Rufus Carlin (Malcolm Barrett) is the pilot. He was Anthony’s understudy and mentee, the only other person who can pilot the time machine. He’s nervous, socially awkward, indecisive, brilliant, scared. A young history professor, Lucy Preston (Abigail Spencer), with an open heart and perfectionist tendencies, is recruited, armed with the task of keeping the past intact. And rounding out the crew is the elite soldier, a haunted man of action, Master Sergeant Wyatt Logan (Matt Lanter), whose mission it is to eliminate Flynn and protect Lucy and Rufus.

Time Period of the Week

The X-Files used to have its Monster of the Week episodes, and Timeless has its Time Period of the Week. Each episode, our reluctant and resolute trio head into the past, scrambling to find Flynn. They land in all sorts of historical moments and hotspots: The Alamo, the Hindenburg explosion, the assassination of Abraham Lincoln, the moon landing, the Watergate scandal, the French and Indian War and on it goes. They meet and interact with all sorts of historical figures, including John Wilkes Booth, Bonnie and Clyde, Jesse James (played by Daniel Lissing for When Calls the Heart fans!), Ernest Hemingway, Ian Fleming, Al Capone, J.F.K., Joe McCarthy, Benedict Arnold, and I could go on and on.

It’s pretty fun stuff. There’s usually a little theme every episode, something a character is grappling with, and one of the historical characters will set things in perspective, deal out advice, share his/her experiences. While the time period changes do make for pretty fun stuff, it is truly the Rufus-Lucy-Wyatt trio that makes the show. The dynamics and the chemistry of that group, their growth and development, their bonding and friendship, their interactions and existential questions – it’s really great stuff.

All are flawed, all are seeking, all have lost and/or risk losing something dear. And now they have a time machine at their disposal, so do you right a wrong in your own life? Is life fated, meant to be, or is it all just chance and happenstance? Are we free to choose? And in the process of the righting of the wrong(s), do they risk changing themselves too much to fit into the “righted” present? Yeah, the show raises all sorts of philosophical ponderings about this mortal existence, about choices and their repercussions, about redemption and justice and vengeance. That very much appeals to me.

Also appealing very much to me is Lucy. Lucy is the heart of the trio – Rufus is the brains, and Wyatt, the brawn, generally speaking (they are all fully rounded characters). And heart – that is truly Lucy’s greatest strength. This is a heroine with heart, who listens and understands and empathizes, even with the apparent bad guys. She feels and feels for everyone. It is something of a “soft” value in this modern day of butt-kicking heroines like Wonder Woman, Katniss Everdeen, Wynonna Earp, Buffy, Agent Carter and Jessica Jones – although I do love a good butt-kicking heroine, as well.

Yet, Lucy doesn’t physically kick butt. She is curious about people, asks questions, listens, is willing to look at multiple sides to issues and wade through the greys of nuance. She’s earnest, sincere, hopeful, thoughtful, loving. There’s no jaded cynicism, no anti-heroic profanity – just earnest compassion, sincerity, and understanding. She suffers from perfectionist paralysis, at times, trying to please everyone and get everything just right, in control, thinking too much instead of proactively acting. Nice, Lucy is nice. And moxie, Lucy has moxie.

And with such a woman, well, one can only hope that the rather broken, shoot-first-ask-questions-later and wholesomely handsome Master Sergeant Wyatt Logan will lay some demons to rest and just embrace Lucy. Yes, there is a deep and abiding friendship between them and a grand, slow burn romance in the making – one that may never truly materialize and bear fruit. Oh, but just picking up on the tentative signs is so satisfying. An elbow touch here, a seatbelt adjustment there, a pep talk, a look – ah, many, many stolen glances and eyes that linger a little too long. Pitter patter – be still my little heart!

Don’t Sweat the Physics – Have Fun!

Any time you’re dealing with sci-fi topics like time travel, there will always be niggling questions about the quantum mechanics and logic of it all. And you could pick the series apart with why’s and why don’t they’s and what about that’s. And history buffs could and can take issue with the historical depictions and inaccuracies. There is decidedly much to nitpick in Timeless. But let the inner nitpicker take a break and just enjoy. Where the storyline and the physics in Timeless may falter at times, the compelling characters and their great chemistry consistently and timelessly soar.

Content Note: Minor swearing and some violence, otherwise not much to come after.

Where to Watch: After being canceled earlier this year, after just one season, Timeless was surprisingly renewed for a second season, which will air spring-summer 2018. Until then, you can buy season one on Amazon or on DVD. The last five episodes are also available to stream on Hulu. On nbc.com, the first episode and last five episodes can be streamed as well. And for those are lucky, you can binge Timeless in its entirety on Netflix UK.