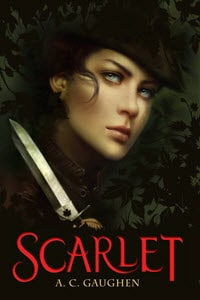 Overview of The Scarlet Trilogy – Posing as one of Robin Hood’s thieves to avoid the wrath of the evil Thief Taker, Lord Gisbourne, Scarlet has kept her identity secret from all of Nottinghamshire. Only the Hood and his band know the truth: the agile thief posing as a whip of a boy is actually a fearless young woman with a secret past. Helping the people of Nottingham outwit the corrupt Sheriff of Nottingham could cost Scarlet her life as Gisbourne closes in. It’s only her fierce loyalty to Robin—whose quick smiles and sharp temper have the rare power to unsettle her—that keeps Scarlet going and makes this fight worth dying for.

Fans of the heroic outlaw, Robin Hood, are sure to love this bold re-telling of one of the most Romantic tales from English folklore. Author A. C. Gaughen takes a favorite story and replaces one of the Merry Men with a woman. The result is a fabulous, nerve-wracking tale of adventure, royal intrigue, and romance. The story begins with Scarlet in which we meet the audacious Will Scarlet. If Robin’s is the glue keeping the band together, then Scarlet is the fire. It continues in Lady Thief with thrilling discoveries and surprising secrets. To protect Robin and his Merry Men, Scarlet makes a deal with the devil that may cause her to lose Robin forever. The trilogy concludes in breathless fashion in Lion Heart where Scarlet uncovers an intricate plot to dispose of King Richard permanently, along with an evil plan for matricide.

The focus of The Scarlet Trilogy is Scarlet, a thieving, knife throwing woman hiding from her past in Robin’s band. The why and how she came to be one of the Merry Men is too “spoilery” to share. I can only promise you that it ties in beautifully with the original lore of Robin Hood. It is also incredibly heartbreaking. Moreover, it is an essential part of how Scarlet became Will Scarlet. It also brings the lack of power women held in their lives into stark relief. The Scarlet Trilogy does not shy away from the ill-treatment of women during the 12th Century. It is not gratuitous. Nor is it graphic, leaving the details to your imagination. And that is enough. As Scarlet begins to reclaim her life and future, her choices begin to make sense as she falls back into her past.

The Characters of The Scarlet Trilogy 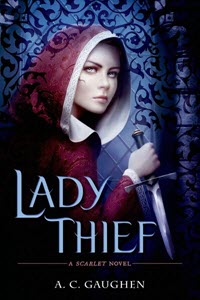 Not all the usual suspects from Robin Hood are present in The Scarlet Trilogy. The staples are there: Robin Hood, Little John, Much, and Will Scarlet. Friar Tuck, Gisbourne, the Sheriff of Nottingham, and the manipulative Prince John also appear. While many of the characters have aspects of their legend, Gaughen truly made these characters her own. Tuck is not a drunk Friar. Instead, he is an often tipsy barkeep. Little John retains his brawn but is also a charming flirt. Much is the most different with an introspective side.

Unsurprisingly, Scarlet is very different. Not just in gender, but also in personality. Similarities to Will Scarlet remain; however, this Scarlet is moodier and more mysterious. What makes Scarlet so fantastic is the contradictions in her character. She is daringly fierce yet vulnerable. Her temper flares quickly, especially when Robin or John stray to treating her “like a girl.” I love that Scarlet is strong but not because of her ability to hold her own among men. It’s her empathy and heart, and her driving need to protect those she loves that make Scarlet compelling.

Of course, we cannot forget Robin. Now a secondary character, he remains the brooding hero and his background remains true to the tales of Robin Hood. Robin knows who is he and has the uncanny ability to really see the people around him. Especially Scarlet. This in part frightens her because of the secrets she refuses to reveal. He remains a crack archer, and clever with strategies. Robin, though, is not without faults. Gaughen ties in the very real mental effects of war and torture to Robin’s story. While it plays out from Scarlet’s perspective, it is clear how much Robin, and the rest of the Merry Men, struggle in the face of his anguish. 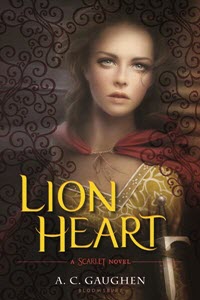 Whew! The boiling tension between Robin and Scarlet is unbelievable! Gaughen makes no attempt to hide their attraction to each other. Instead, she brilliantly creates a push and pull as each attempt to maintain distance until it becomes unbearable. It is all in the flicker of a glance, the brushing of hands, or the fear if either one falls into danger. There is something rare about a romance that maintains it’s tension across three books. It is there, always lurking. Even in scenes where Scarlet is alone, the way her thoughts turn to Robin will make your heart race.

Scarlet is very introspective about her feelings for Robin. It is sad, at times, as she believes herself unworthy. Which is interesting because Robin believes himself equally unworthy. Their romance is also not all rainbows and unicorns. Aside from issues that are obvious when you read the novels, there are other obstacles that create a rift between them. Scarlet is the perfect partner for Robin and vice versa. Their battered hearts and souls found each other. They attempted to deny their feelings to protect the other. They were selfless yet, oddly enough, and for lack of a better word, selfish.

I cannot explain more than that without giving away a central point of the plot; however, trust me when I saw you will love it! Their relationship is the epitome of angst and sacrifice in all the good ways.

Overall Thoughts on The Scarlet Trilogy

While there were some parts that were slow, overall The Scarlet Trilogy is a wonderfully rich and imaginative tale about Will Scarlet. Everything centers around Scarlet’s identity. It dissects the woman she was before she became one of Robin’s “men,” and the woman she’s becoming while in his band.  The story pulls Scarlet in impossible directions. Yet, even at her lowest and when her despair is overwhelming, she circles back to one thing. With Robin, she is her truest self.  The label “young adult” is slightly misleading. I found this to be more adult despite the “ages” of the characters.

The secrets are surprising, the traditional tale twisted on end. The result is a fascinating read of a bold woman who stays true to her heart, even in the worst of times.

Have you read The Scarlet Trilogy? What did you think of this imaginative re-telling of the Robin Hood legend?

Content Warning: There is violence against women. While indicative of the period, it didn’t make it any less disturbing to read. It is not graphic or gratuitous, but there is just enough description to make you wince.

Where To Buy: Check local bookstores, Barnes and Noble, and Amazon.

Our romance-themed entertainment site is on a mission to help you find the best period dramas, romance movies, TV shows, and books. Other topics include Jane Austen, Classic Hollywood, TV Couples, Fairy Tales, Romantic Living, Romanticism, and more. We’re damsels not in distress fighting for the all-new optimistic Romantic Revolution. Join us and subscribe. For more information, see our About, Old-Fashioned Romance 101, Modern Romanticism 101, and Romantic Living 101.
By Catherine on December 14th, 2017