There are key components that must work together to create the perfect “romantic moment” or scene in a story. One of them is, of course, a good speech or words from the heart. Then there has to be a couple in the said scene that the audience cares about. These two things are the only vital musts to engage an audience. But beyond this, a touch of magic never hurts! Like romantic moments in the snow.

One addition to making these romantic moments in the snow enchanting is a blanket of snowfall as their background. Perhaps our sense of wonderment doesn’t quite reach that of Lorelai Gilmore’s, still, it’s magic. It’s kind of like a moment straight from a fairy tale without the story actually having to be a fairy tale.

Today we’re going to look at ten such moments from across the years and genres in cinema – both the big and small screen. Of course, like every list, this isn’t all-inclusive. That said, these ten romantic moments in the snow are sure to melt your heart.

As a warning, there will be SPOILERS related to each of the features on this list.

10 Romantic Moments in the Snow in Film and Television

Though not romantic in the same way many of these scenes are, this one is here simply because of the characters. Beast is so (seemingly) cold and closed off to everyone and the world. To see him engage in some frivolity with the girl who’s melting his heart, well, it’s quite lovely. Elaborating on this couple will have to keep since plans to feature them is in the works.

Where to Watch: You can rent or buy on Amazon Video (or DVD) or you can find this one on Netflix. 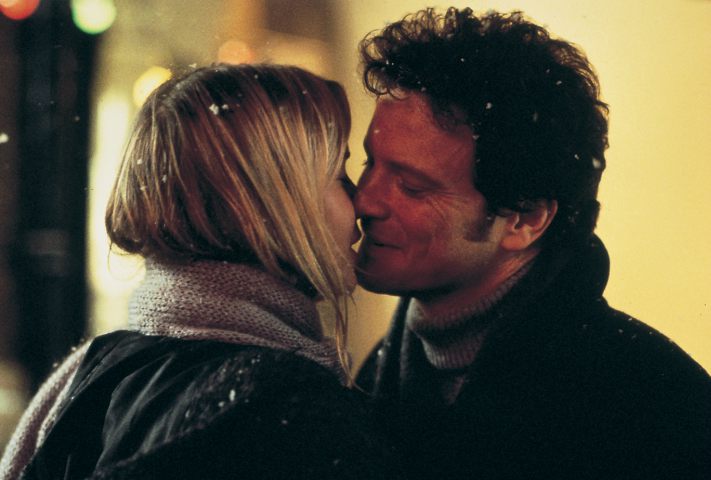 This is one of those movies I have not seen despite liking two members of the cast. That said, even knowing nothing of the characters, this reunion scene is heart-melting. Just as Bridget has given up on Mark Darcy, and is about to be whisked off to Paris with friends, he returns to make a declaration complete with one of the cutest almost-kisses. All of this happens under a gentle blanket of snowfall.

Where to Watch: You can rent or buy on Amazon Video (or DVD) or you can find this one on Netflix. 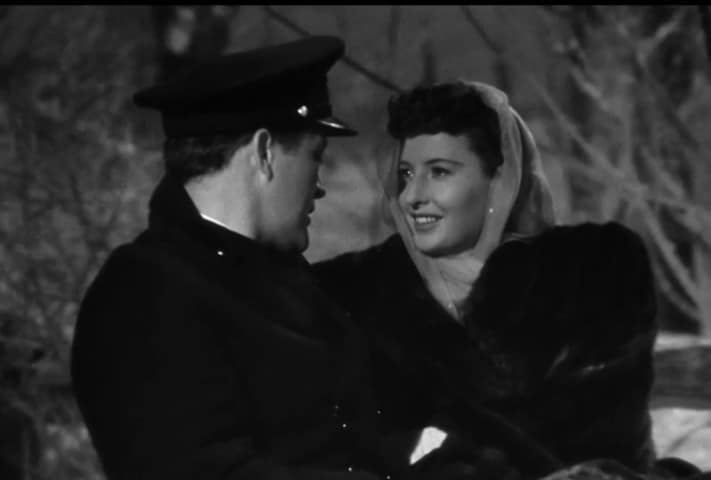 There may not be any snowfall drifting from the sky, but there is snowfall blanketing the ground in this romantic sleigh ride between Elizabeth Lane and her soldier, Jefferson Jones.

Where to Watch: You can (at time of publication) watch with Amazon Prime on Amazon Video (or buy DVD).

Content: Though unrated, this one doesn’t contain anything offensive. 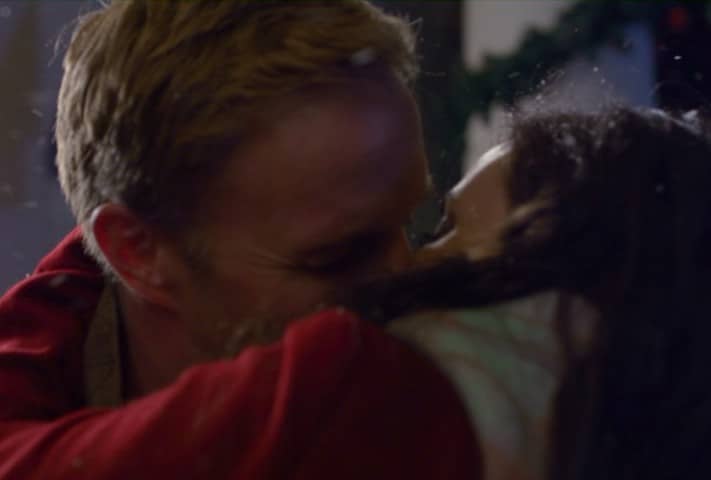 This scene is so darn cute! It involves a king (played by Persuasion’s Rupert Penry-Jones) riding on his trusty stallion to bring back his lady love. Of course, harkening back to their “meet cute,” his words:

“The fact is… you had me at sewing kit.”

…are the cutest ever. To appreciate the swoony adorableness, I’d advise you watch this sweet fairy tale.

Where to Watch: You can buy on Amazon Video (or DVD).

Content: Though “not rated,” ‘Crown’ is appropriate for all ages. 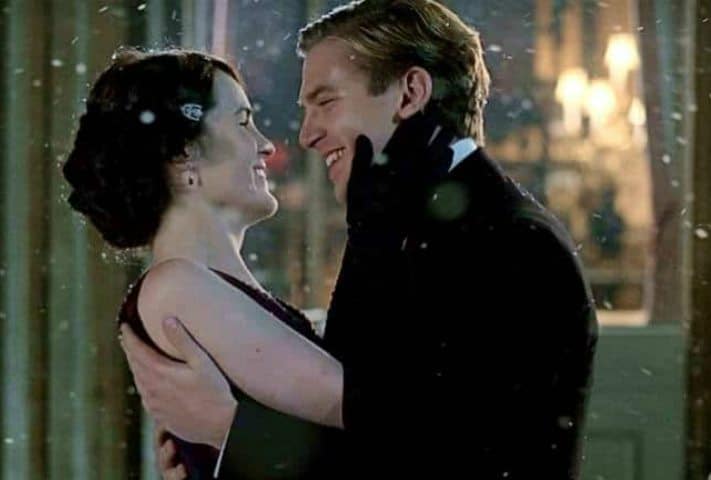 Perhaps this scene is THE most universally beloved on this list simply because of the characters longing, and waiting on the viewers’ part. When the moment finally arrives, it’s everything we wished for and then some. We spotlight this moment in its entirety in a Romantic Moment feature.

Where to Watch: You can rent or buy episodes on Amazon Video (or DVD). Downton Abbey is also available on Amazon Prime.

Okay. So adding this film to the list is a little bit of a stretch. Oh, it fits in the sense that it’s a story set at Christmastime complete with snowfall. The reason including this one IS a stretch is that the actual scene isn’t IN the snow. Still, the heroine, Amanda has to make a mad dash through the snow to get to her sweetheart. That totally counts, right?

Where to Watch: You can (at time of publication) watch with Amazon Prime on Amazon Video (or buy DVD). It’s also available on Hulu.

Ah, New York at Christmas! Is there any more electric setting for a film at Christmas than this? I’d argue not. To pair with that one needs a romantic carriage ride through Central Park which is precisely what these would-be lovers indulge in.

Where to Watch: You can buy on DVD.

Content: There is some profanity and sex-related humor. It Had to Be You is rated PG-13.

8: Marry Me For Christmas 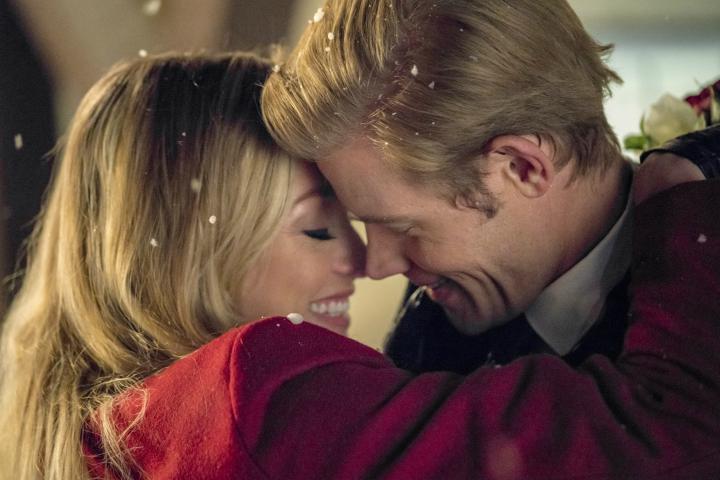 A sweet kiss in the snow following a reunion is the perfect way to end this sweet story, the first of Hallmark’s Christmas originals in 2017.

Where to Watch: Check your local Hallmark Channel listings for encore showings.

Content: this one is rated TV-G and contains nothing offensive. 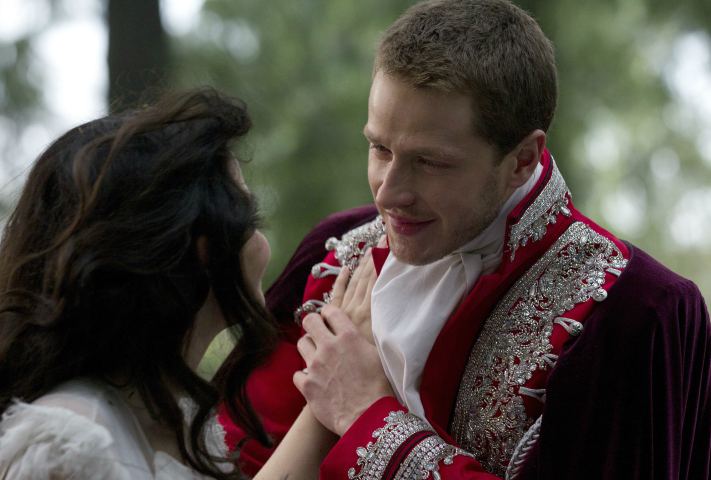 The photos don’t show it, but the gently falling snow in this scene between Snow and Charming (“True Love’s Kiss”) adds to the beautiful ambiance of the moment.

Where to Watch: You can rent or buy episodes of Once Upon a Time on Amazon Video. It’s also on Netflix. ‘Once’ is rated TV-14.

What says Christmas more than this icon of a film? The familiar lyrics by Bing Crosby sings the titular song with co-stars Vera-Ellen, Danny Kayne and Rosemary Clooney in the final scene that not only includes SNOW, but also a sweet romantic reunion that’s just “meant to be.”

Where to Watch: You can rent on Amazon Video (or buy on DVD) or you can find this one on Netflix. This is a preemptive addition considering this film hasn’t yet premiered. Part of Countdown to Christmas, this film promises its usual old-fashioned romance Hallmark is known for, plus just look at this photo! If that doesn’t look romantic, what does? The hand on the cheek is always a romantic scene winner.

Where to Watch: Catch the premiere of Christmas Next Door on Hallmark Channel Saturday, December 16th! Check your local listings for times.

Have you seen any of these romantic moments in the snow? Which is your favorite – or tell me all about those I don’t mention above? Let’s chat about the romantic backdrop known as snowfall. Sound off below.