From the first time I heard about Gifted, I was curious. Then a trailer released showing a tender drama about family, and I was a goner. If my intuitive movie judgment was working, I “knew” this would be 100% a “me film.” As months passed, unfortunately, my Cineplex never did pick this one up. Then, one day, there it sat. In glorious HD, the BluRay, perched on store shelves.

Mary Adler (McKenna Grace) has only ever had normal. It’s a simple life in a small world that includes Fred, Roberta (Octavia Spencer) and Frank (Evans).

Fred is her one-eyed cat. Roberta is her next-door neighbor (and best friend) and then there’s Frank. Biologically, Frank is her uncle, but he’s the closest thing she’s ever had to a father. Today everything changes. Today, Frank sends Mary to school. Mary doesn’t want to go, instead, she wants to remain with Frank and continue their homeschool routine.

Frank knows Mary is special. He knows she has a gift for learning, and more specifically, numbers. But he also knows Mary needs normalcy. If she doesn’t, she’s going to end up a tragic story in the newspaper. When Frank’s mother (Lindsey Duncan) reappears in their life, with more than quality time on her agenda, everything changes…

Sometimes we have high expectations for a film that disappoints. Gifted suffers no such fate. It’s a brilliant little film that I suspect is terribly underrated. Many things impress, but one of them is the storytelling. In terms of a script, the story flows really well and keeps the dialogue and scenes interesting and smart. Filmed in Florida and directed by Marc Webb (500 Days of Summer), the setting also provides a good backdrop that promises even the darker themes will give way to happier days.

With an Oscar-nominated cast, one would guess the cast is sure to affect the story in a positive way. This is true of this cast. Much as I adore him as Captain America (and will hate to see him leave the franchise), it’s lovely to see Evans step into a new role. He’s absolutely brilliant. The emotion he’s able to convey and portray is wonderful. He’s also the kind of character that first blush impression proves wrong. This kind of film suits him well. Finally, Spencer and Duncan (a popular British actress known from many BBC productions) are equally fantastic, both earning “spotlight” scenes that showcase their talent. However, it’s newcomer McKenna Grace who steals the show.

Her firecracker Mary is the character we laugh with, cry with and root for. We desperately wish for her everything Frank envisions and know she’ll meet, and exceed everyone’s dreams along with her own. She’s a spitfire character the viewer has no choice but to love to pieces. The on-screen chemistry she and Evans share is delightful and presents a perfect snapshot of a solid, loving and honest father-daughter bond. One of the best things about the script is the layers each of these characters have. 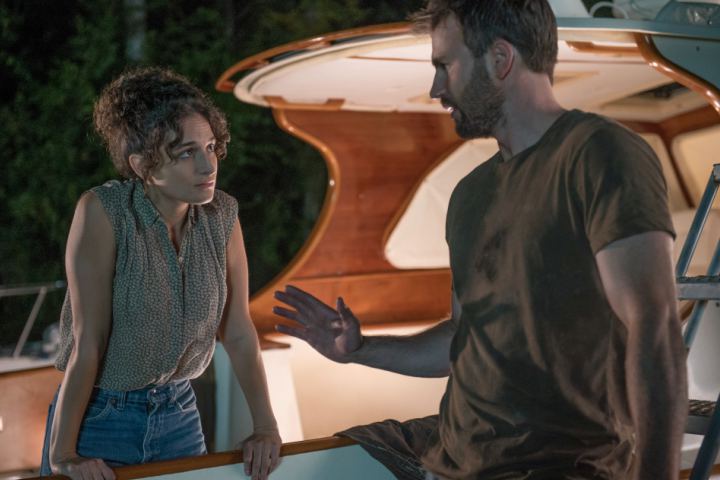 Overall, if you’re looking for something to break away from the big action blockbusters, Gifted is the perfect antidote. There’s a little something for everyone wrapped inside its story. You’ll laugh (seriously, Mary has the best lines ever), experience surprise by its story direction, and keep the Kleenex handy. (This one even inspires me to tear up.) Anyone who enjoys complex dramas about perfectly flawed human characters with a moral compass will discover Gifted is a “must see” option sure to draw a smile.

Content Note: Gifted earns a PG-13 rating for some thematic elements and profanity.

Where to Watch: You can rent or buy Gifted on Amazon Video, buy it on DVD / Bluray (Amazon) or you can rent/buy it via iTunes.

ARE YOU A FAN OF ROMANCE? FOLLOW THE SILVER PETTICOAT REVIEW:

Our romance-themed entertainment site, silverpetticoatreview.com, is on a mission to help you find the best period dramas, romance movies, TV shows, and books. Other topics include Jane Austen, Classic Hollywood, TV Couples, Fairy Tales, Romantic Living, Romanticism, and more. We’re damsels not in distress fighting for the all-new optimistic Romantic Revolution. Join us and subscribe. For more information, see our About, Old-Fashioned Romance 101, Modern Romanticism 101, and Romantic Living 101.