In Rae Carson’s series, The Gold Seer Trilogy, she combines the romantic rugged beauty of the Wild West with elements of magic and fantasy. The trilogy begins with Walk on Earth a Stranger. It continues in Like a River Glorious. The final installment, released on October 10, is Into the Bright Unknown. Leah “Lee” Westfall’s life takes a violent turn when she discovers her beloved parents murdered.

Disguising herself as a boy, Lee runs away and heads to California to escape her controlling Uncle. It’s the start of the California gold rush and Lee has a secret: she can sense gold. Lee knows when it is near, the exact location, and exactly how much.

Hooking up with a wagon train, Lee sets off on a perilous journey west. To survive, Lee will have to dig deep for courage and strength to find a new place to belong and call home. 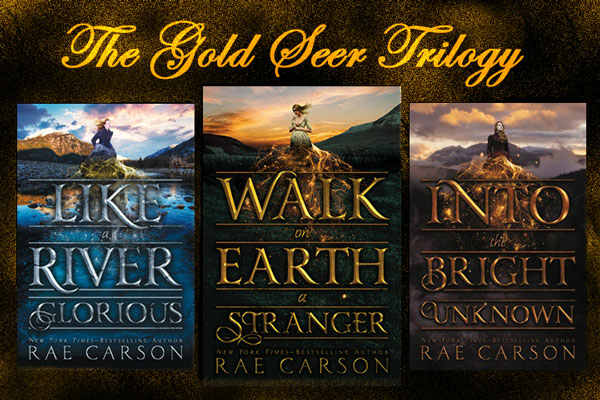 Every now and then a series of books comes along that simply sweeps you off your feet. The Gold Seer Trilogy is one such series. It’s a sweeping historical fantasy set against the backdrop of the wild west and the California gold rush. Furthermore, the story is vividly alive with themes of discovery, loss, and faith. It is teeming with the sights and sounds of America’s expansion westward. Centered around a young woman’s destiny with gold, The Gold Seer Trilogy is the missing series in your collection!

Warning! There are some very minor spoilers below. If you don’t want even a hint of spoilers, stop reading now and take my word for it – you will love Leah Westfall’s story!

The heroine, Leah Westfall, sinks her hooks into you immediately. When her life explodes into tiny pieces, she fights with everything in her to maintain her identity. Lee is brave and undaunting as she makes her way west. She faces every obstacle with courage and conviction. Lee is not unafraid. But, she won’t let fear control her. Part of her fear is others discovering what she can do. So, she keeps her powers a secret except with those she trusts. In this way, she controls who knows what and when. For Lee, control is very important.

“When there’s gold to be had, you can’t trust anyone. Not a single soul.”
– Leah Westfall, Walk on Earth a Stranger

Lee’s “witchy powers” put her life at risk. With gold fever sweeping the populace, Lee is exactly who a gold miner wants to strike it big and fast. She is the golden goose, so to speak. Demands on her skill would ultimately overwhelm Lee. And those wanting it for themselves would not hesitate to use her against her will. Anyone who seeks to control her through fear and intimidation are Lee’s greatest enemies and threats. However, how Lee combats those threats and its accompanying fear are truly what makes this character shine.

The Fabulous Secondary Characters of The Gold Seer Trilogy

Lee is not the only compelling character in The Gold Seer Trilogy. First, there is Jefferson, Lee’s childhood friend…and more! He’s part Irish and part Cherokee. His heritage makes him an outcast. Jefferson sees the decimation of his mother’s people and the callous disregard shown by members of the wagon train. Naturally, there is anger.

However, Jefferson’s nature is one of thoughtful progress. He sees the greater picture. As a result, every action he takes is to reach that goal. And that includes having Lee by his side.

“I’m not getting separated from you again, understand?
Be as stubborn as you want; it doesn’t matter. Where you go, I go.”
– Jefferson Kingfisher, Like a River Glorious

Another character that shines is Becky Joyner. Traveling with her husband and children, she conceals her true thoughts behind the visage of a proper wife. However, an unexpected boldness lurks beneath the surface, giving her depth and layers. It emerges as perfectly as Becky’s manners – at the proper time and place.

“I’m not letting it go….Just because a bunch of men pass laws so other
men who look just like them can legally steal? Doesn’t mean they
should get away with it.”
– Becky Joyner, Into the Bright Unknown

Equally important are the bevy of other travelers that round out Lee’s journey. Families and bachelors, war heroes and war criminals, as well as your unsavory character whose motivations are always self-serving. Lastly, are the primary antagonists in The Gold Seer Trilogy. These men are vastly different yet both seek to control Lee. In a time when women could not vote or own property, these villains seek to take advantage of Lee.

The Wild West and California

The Gold Seer Trilogy begins in 1849, at the start of the California Gold Rush. Carson takes us on an epic journey west. First, we begin in Georgia and cross the Mississippi River. Then, we trudge across the plains and over the Rocky Mountains. Her descriptions of the hardships men, women, and children experience are faultless. Disease and death are constant companions. Deception and violence rear their ugly head as greed overcomes good sense. Still, there are greats acts of kindness and generosity.

Carson’s narrative pulls you in deeply. In the distance, you hear the sounds of the prairie. Whether the thudding fall of buffalo hooves on a stampede or the wind sweeping across the plains. Or, the creaking wagon wheels echo loudly as horses and oxen carry their load over mountains. Truly, her description of coffee percolating over an open fire will having you craving your own steaming mug. Consequently, Carson’s words swirl around you, filling your mind with images of the past.

Despite the beauty of the west, Carson does not solely romanticize the journey. Lee’s perspective shows the abusive and cruel treatment of Native Americans. Furthermore, Carson does not gloss over the treatment of slaves in the pre-Civil War United States. On the contrary, she paints racial discrimination and fear of the unknown with bold strokes. In part, it’s a lesson for Lee, who experiences different cultures for the first time. In addition, it’s a reminder of the steep cost of America’s westward expansion.

Last, but certainly not least, yes, there is romance! However, it’s not the focal point of the story. Nor is it the backstory. Instead, it balances beautifully with Lee’s overall journey. Also, Carson does not utilize the weary trope of a love triangle. Instead, the development of Lee and Jefferson’s romance follows the progression of Lee’s characterization. It builds directly with every discovery Lee makes about herself and what it means to have a family. It’s a lesson of acceptance, of overcoming fear of loss and more heartbreak.

The Gold Seer Trilogy is a beautiful story of personal growth in the face of adversity. It’s a tale of family and love and one woman’s battle against man and nature to stake her claim. You will not regret one moment spent buried in its pages!

Content Note: There is some violence such as kidnappings, dangers of the prairie, and death due to accidents or murder. There are also depictions of racism.

(scroll down for the full Old-Fashioned Romance Breakdown)