Pygmalion was a mythological character who dabbled in sculpture. He made a statue of his ideal woman – Galatea. It was so beautiful that he prayed to the gods to give it life. His wish was granted. Bernard Shaw in his famous play gives a modern interpretation of this theme. 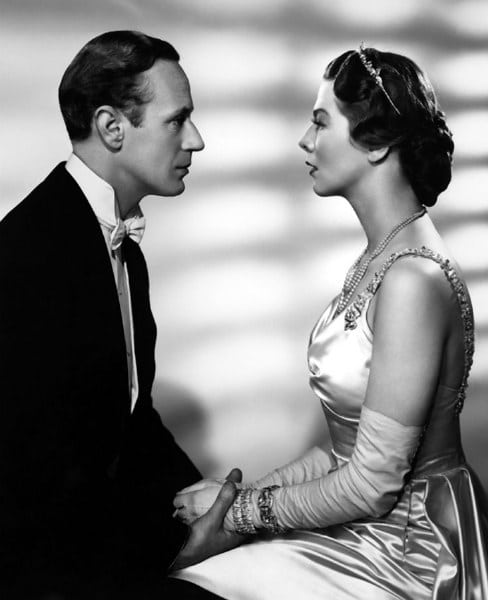 Such reads the foreword to Pygmalion, a cinematic adaptation of the Nobel Prize-winning playwright George Bernard Shaw’s 1913 play of the same name. The screenplay for Pygmalion, the movie, was penned by Shaw himself (with other co-authors) and garnered the man an Academy Award for Best Screenplay.

This cinematic adaptation then went on to inspire the theatrical hit musical and film My Fair Lady. Yes, Shaw’s Pygmalion is the source of that now well-known, Cinderella-like story of Eliza Doolittle and Professor Henry Higgins.

“I shall make a duchess of this draggle-toothed guttersnipe!”

Pygmalion tells the story of the transformation of a poor and unrefined street urchin, a lowly flower seller, Eliza Doolittle (Wendy Hiller), from guttersnipe to refined, graceful lady, and the lasting consequences of that transformation. Yet, unlike the fairy-tale flick of a magic wand, the transformation of Eliza is a long, grueling affair under the brutal tutelage of Henry Higgins (Leslie Howard), professor of phonetics, confirmed bachelor and unrelenting taskmaster. Eliza must work and work hard to enact this transformation.

RELATED: The Art of Us (2017) – Celebrates “Eliza Doolittle Day” with a Contemporary Twist on ‘My Fair Lady’ 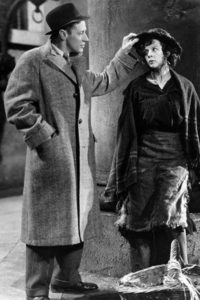 Professor Higgins first encounters Eliza during one of his many walks through London, where he collects and transcribes dialects. He prides himself on pinpointing the sources of accents and dialects and is a self-absorbed, arrogant eccentric and internationally renowned expert with an acerbic and incisive wit.

During the initial exchange, which introduces Higgins to a great admirer of his, Colonel George Pickering (Scott Sutherland), Eliza overhears the bragging Higgins tell Sutherland that he could transform her, this lowly flower girl, into a duchess. Higgins then tosses some coins to Eliza and walks off with Sutherland.

Eliza arrives at Professor Higgins’ abode the very next day.  She has money in her pocket and intends to convince the professor to teach her enough proper English, so as to enable her to get a job as a flower girl in an actual shop. That is her ambition. Higgins quickly gets his own, grander ideas. He wagers with Sutherland that he can pass her off as a duchess at an ambassadorial reception within three to six months, dependent upon her work ethic. Eliza is bullied into acceptance. Her own father virtually sells her to Higgins, and that is that. Eliza becomes the pet project of the professor’s, an object to mold by the heralded and exacting expert.

“This is almost irresistible. She’s so deliciously low, so horribly dirty.” 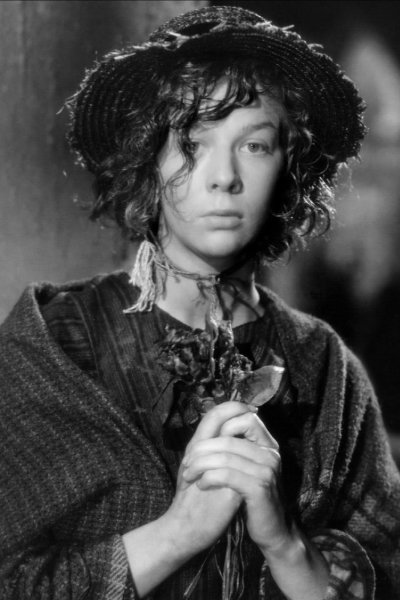 And so, the work begins, the stripping away of Eliza’s Cockney accent and her impoverished manners, and the subsequent building up of proper grammar and decorum. The film uses montages, innovative in its time, to show this process. There is a rather hilarious reveal of their work when Eliza attends a tea party and, with a near perfect proper accent, makes inappropriate small talk in street slang. The disconnect between delivery and content is very amusing. She even swears, and its inclusion is the first time that the word “bloody” was ever used on the big screen.

After the rather botched tea party, Higgins and Eliza work some more and still some more – montage after montage – until she is ready for the big reveal. Is she now Cinderella? Can she pass as a duchess at the Transylvania ambassadorial ball? Yes, yes, she can.

High on success after the ball, Sutherland and Higgins congratulate themselves on their hard work, as the lady Eliza seethes and eventually erupts in anger and despair. All the emotions – suppressed after months of Higgins’ daily bombardment of “refinement” – come to a head. Eliza is irrevocably isolated from her roots, scared. The bet is over, and –object that she is to Higgins – she can now be cruelly and heartlessly discarded back into the gutter.

RELATED: Romantic Moment of the Week: Selfie – Henry and Eliza Connect Over A Trash Can?

Now the gloves are off, and the slippers are thrown. And Professor Higgins doesn’t know what to make of it, of her. He doesn’t know what to even make of his own stirring emotions. The rat-a-tat interchanges here, as Eliza and Higgins hash it out, is verbal foreplay at the highest level. I just cannot explain how gloriously pleasurable it is to watch these igniting exchanges. And as his creation begins to tower in independence, in autonomy, in self-confidence, Professor Higgins sees her, perhaps for the very first time, really sees her, and admits out loud, wondrously, quietly, “I like you like this.” Yet, Eliza pulls a Rhett Butler and walks out that door. 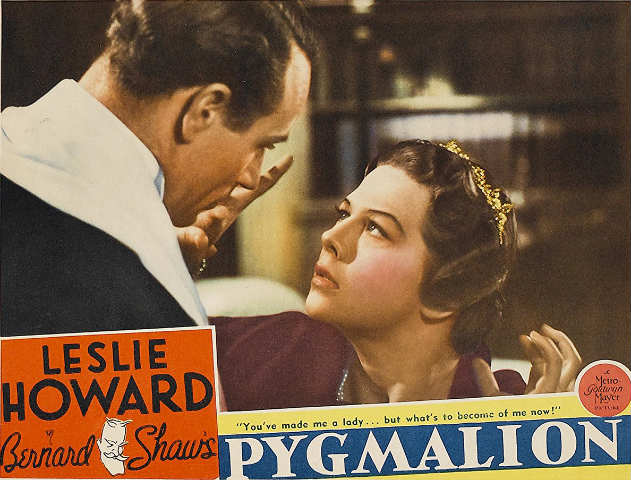 Does it end that way? Shaw eschewed any romantic ending for Professor Higgins and Eliza Doolittle. He didn’t want a fairy-tale happily ever after. But the movie adaptation is, mercifully, a wee bit more ambiguous for us romantics at heart, who dare to believe that even the staid and sardonic old bachelor can change, can drop his airs of practiced indifference, be vulnerable, express earnestness and kindness on occasion, instead of always hiding behind a shield of irony and wryness. Can our beauty transform this beast? 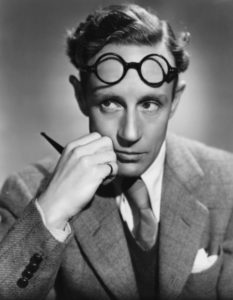 And we hope for the professor’s own transformation because the Higgins portrayed by Leslie Howard seems to always have a self-aware irony and vulnerability, despite his incessant castigating cruelty at times and mask of indifference. It is a nuanced and impressive performance. And Wendy Hiller is equally nuanced and impressive in her portrayal of Eliza Doolittle. Hiller was the playwright’s choice for this role, and she shines brightly. They both do. Hiller and Howard’s chemistry is sizzling. It is truly a tour de force and an absolute pleasure to behold.

Pygmalion is breathlessly and brutally brilliant. It raises all sorts of questions about nature versus nurture, about class and morality, about misogyny and what it is to be a woman, about notions of the self, and about the nature and aspects of love. Seriously, I do not know how it is that I went 42 years on this planet without ever having seen this film. And I have now become something of a major fangirl of Leslie Howard. Be still, my 42-year-old heart, but that man is fine.

See it. Pygmalion may be nearing 80, it may be black and white, but its brilliance and its beauty are timeless.

Fun Fact: If you’re looking at Wendy Hiller and thinking, “My, but there’s something familiar about that woman,” well, that just might be because there is. Wendy Hiller, many moons later in her life, played none other than Mrs. Harris, the haughty hypochondriac recluse, and mother to Anne Shirley’s love interest, in Anne of Avonlea (1987).

Content Note: Not rated, but probably a PG for minor swearing and mature themes.

Our romance-themed entertainment site is on a mission to help you find the best period dramas, romance movies, TV shows, and books. Other topics include Jane Austen, Classic Hollywood, TV Couples, Fairy Tales, Romantic Living, Romanticism, and more. We’re damsels not in distress fighting for the all-new optimistic Romantic Revolution. Join us and subscribe. For more information, see our About, Old-Fashioned Romance 101, Modern Romanticism 101, and Romantic Living 101.
Pin this article to read later! And make sure to follow us on Pinterest.
By Jessica Jørgensen on October 11th, 2017

10 thoughts on “Vintage Film Review: The Timeless Brilliance of Pygmalion (1938)”