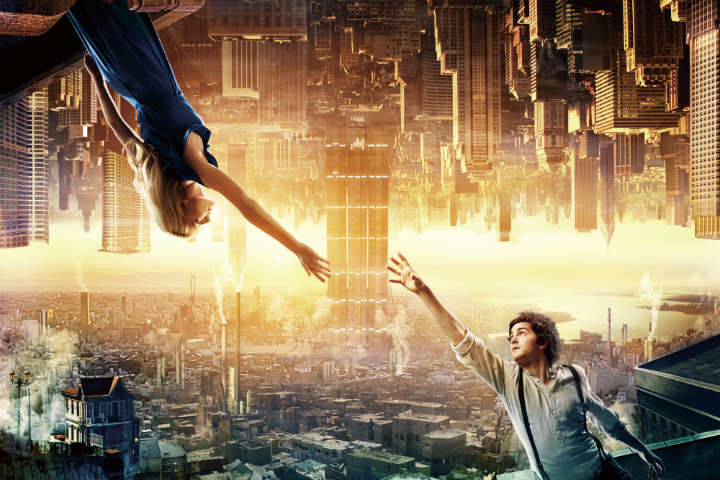 Upside Down is a lovely sci-fi film with fairy-tale aspects. It’s a Canadian-French production which I likely would not have heard of had it not been advertised on the DVD of another lesser known Canadian film I watched. Overall, Upside Down is a unique movie with spectacular effects, a touching story and a great cast.

In this universe, two worlds orbit the sun together while maintaining opposite gravities. As children, a boy (Adam) and girl (Eden) happen to meet at a place where two mountaintops almost touch. A friendship grows and turns to romance as they grow older. However, the people of the two worlds are forbidden from fraternizing and so they must conceal their connection.

One day they are very nearly caught and Eden is injured. The next time they are due to meet Eden does not come. Thinking that she has died Adam is surprised to see her on TV some years later. He becomes set on finding a way to travel between worlds to see her again.

The film’s strongest aspect is its visuals which are breath-taking. Flawlessly achieved through a combination of green screen and practical effects, the world is a character in its own right. Indeed the film is worth watching for the look alone. However, it has much more to offer.

Going into Upside Down you need to remember that this story is more fairy-tale than sci-fi, so you should not expect the science here to necessarily make any sense. If you can overlook this then you are in for a treat. Upside Down is a beautiful, strange film with an enticing premise.

One might argue that the story is a little vague and to some degree, you would be right. However, in some ways that is perfectly fitting for the type of narrative Upside Down has. Fairy tales by their very nature are often based on a simple story told with the use of strong imagery and the film definitely has that. For the most part, I think it works well enough to hold your interest even with an exposition-heavy narration at its opening.

Dunst, Sturgess and Timothy Spall do well with the material given. The romance was sweet though the chemistry between Kirsten Dunst and Jim Sturgess could have been stronger. While the love story forms much of the characters’ motivation, we aren’t given quite enough in order to truly become invested, which is a shame.

Overall though, despite its flaws, Upside Down is a delightful and imaginative film which is well worth watching.

Content Note: Rated PG-13 for some violence. Nothing explicit.

Where To Watch: Amazon Video and DVD.