The Magic of Ordinary Days (2005): A Captivating Romantic Period Drama from Hallmark 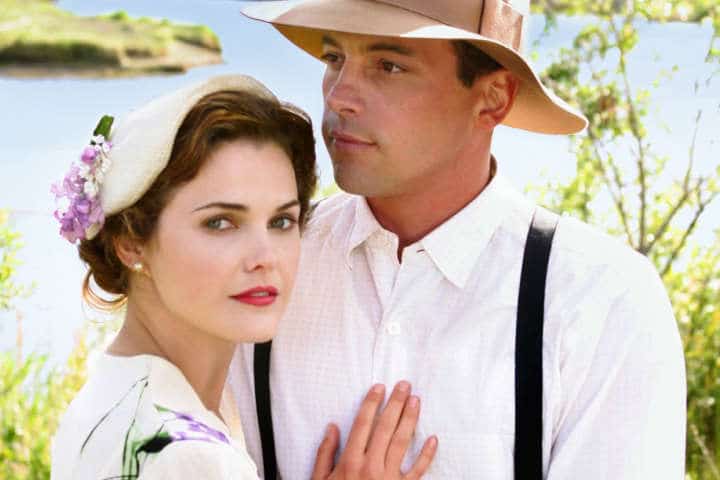 The Magic of Ordinary Days Review

I went on a Hallmark binge a few years back and made sure I watched at the very least, all the Hallmark Hall of Famers. In my opinion, these stories are generally given better scripts, have a lot more depth, and usually deal with love stories that are a little more complex than the typical fair. As it turned out, The Magic of Ordinary Days did not disappoint.

Adapted from Anne Howard Creel’s novel of the same name, The Magic of Ordinary Days is one of my all time favourite Hallmark Hall of Fame movies.

It helps that it’s a period drama as well. The reality surrounding the main characters’ circumstances are made more compelling due to the time and place.

Welcome To The Family 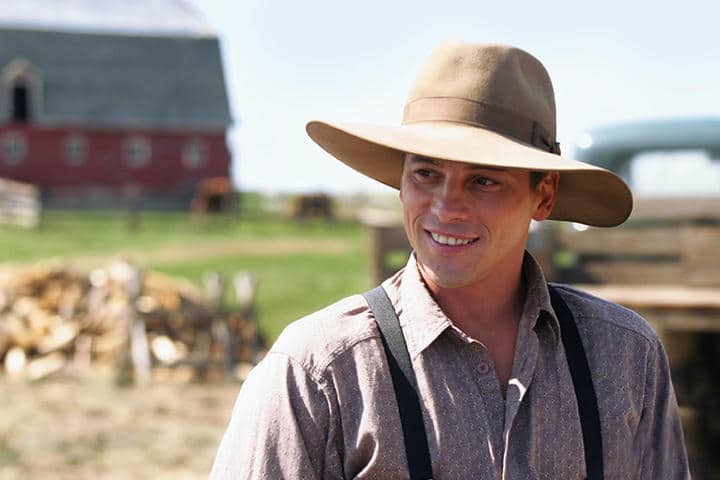 Set in rural Colorado during 1944, The Magic of Ordinary Days opens with Olivia “Livy” Dunne (Keri Russell) on board a train. Based on her appearance, it’s obvious that she benefited from a privileged, somewhat pampered upbringing. When a soldier courts Livy, however, the brief indiscretion leads to an unplanned pregnancy. Livy barely knew the soldier and her father, a minister anxious to avert a scandal, arranges for her to marry a stranger to restore her respectability.

Though we have faith and reasonable hope for forgiveness, we must each face the fact that our actions create a banquet of consequences. In your case, you may think this is a mean supper, but you chose it.

Ray Singleton (Skeet Ulrich), a shy farmer lives a modest, simple lifestyle and agrees to marry Livy despite her pregnancy. Ray is all politeness – “Yes ma’am, no ma’am” – a trait that seems to instantly grate on Livy’s nerves. The wedding is awkward and stilted. Ray looks embarrassed and Livy self-conscious, aware of her role in their arrangement. It’s only when they arrive at her new home that the reality of her predicament begins to dawn. The house is miles from town and the closest neighbour. It’s also become more apparent that she and Ray are very different people. A graduate student of Archeology, she tries to talk to him about her thesis on the German archeologist Heinrich Schliemann. Immediately, Ray asks if he’s a Nazi and Livy is left to gently assert that Schliemann lived in the 19th century.

It’s clear that while Ray instantly falls in love with her, for Livy, her new life leaves her feeling stifled. Notwithstanding the fact that Ray, his sister Martha (Mare Winningham), and their extended family welcome her, she resents being forced to wed a man she does not know or love. Despite Ray’s best efforts to help Livy settle, the harder he tries, the more he alienates her. The distance of their arrangement begins to wear on Ray and strain their pseudo-cordial relationship.

While the film focuses on the relationship between the down-to-earth Ray and the worldly, educated Livy, there is also a secondary plot around two Japanese women who Livy befriends, as well as a forbidden romance with a German soldier.

Will Livy learn to appreciate The Magic of Ordinary Days, or will she yearn for the life she believes she’s lost? 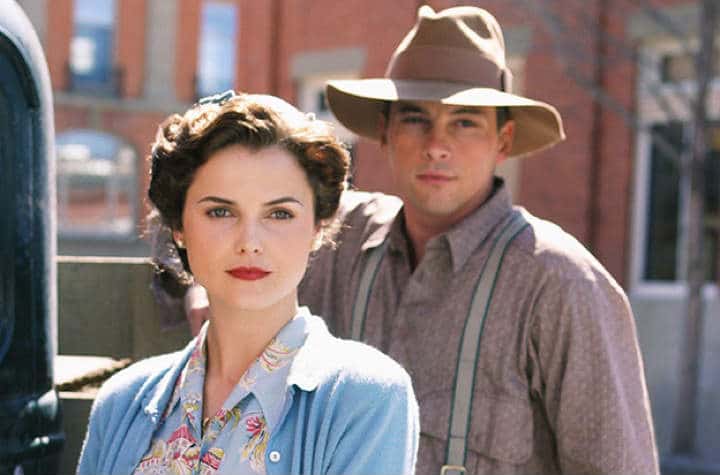 Keri Russell and Skeet Ulrich shine in The Magic of Ordinary Days. Despite the chasm that divides them based on their differences, they do have some things in common. While they are both introverts and understandably have no idea how to understand and manage the other, watching their relationship begin to progress is exciting to watch. Like most charged romantic dramas, development in Livy and Ray’s relationship begins when they start to argue and disagree – first in small ways and later with some spectacular repartee.

Keri wonderfully captures how trapped Livy feels, balancing that with nuanced glimpses or discreet smiles as she tries to hide her surprise when she is actually enjoying herself.

After mom died, I was so lonely. I gave my life away, just to be held by a stranger. How could I do that?

Skeet, in turn, is perfect as a shy farmer. He tries so hard to make Livy’s life easier and is in many ways, a perfect gentleman and the perfect man. Ray is practical about life and love, grounded in his faith and beliefs. When Livy asks him why he agreed to marry her, he simply states, “When the Reverend come out to see me and told me about your situation, I thought maybe it be God’s will”, much to Livy’s incredulity. “God’s will?” she repeats, completely astounded by what she perceives as his simple way of thinking. However, Ray isn’t stupid; he just isn’t as interested in dreams of distant lands. His land is important to him, something Livy comes to understand as their story progresses.

Mare Winningham is the voice of reason, Ray’s older sister Martha, and the encouraging Ray/Livy shipper. In fact, Ray’s whole family is supportive, a juxtaposition with Livy’s kin. Tania Gunadi also stars as Florence and Gwendoline Yeo as Rose, the two Japanese women Livy befriends. Yeo in particular, while she has less dialogue than Gunadi, manages to steal the scenes she is in nevertheless. As the older sister, she is wary of Florence’s girlish daydreams and tries to shepherd her wayward sister into safer territory.

I’d Do Anything To Make You Happy 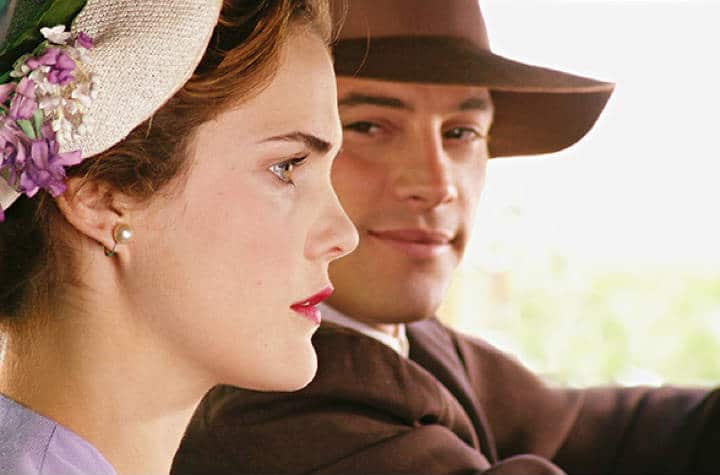 Every romance has the third act confession of love. The Magic of Ordinary Days is no exception. But I’ve got to admit, it’s pretty spectacular. Ray with his heart on his sleeve is hard to resist. Rustle up a few tissues just in case. I can’t promise you’ll make it through without blurred vision.

I’ve learned more about love in my 6 months with this family than I did in my 25 years in my father’s house. I have received love here. And I have received forbearance. And I thank you. I will always remember you. Every one of you.

While the film is very enjoyable, Florence’s secondary romance is underdeveloped and underserviced. While the book the film is based on most likely did it justice, here it’s an unnecessary addition. The film might have done better if it was given proper development, or if it was cut completely. Despite that minor gripe, this film is a winner.

If you’re looking for something sweet to watch, something romantic, but more robust than a passing romance, I highly recommend The Magic of Ordinary Days.

Where to Watch: The Magic of Ordinary Days is available for sale on Amazon or can be streamed on YouTube.

Content Note: The Magic of Ordinary Days is safe for family viewing.

Have you watched The Magic of Ordinary Days? What did you think? Comment below and let me know!

35shares
We use cookies to ensure that we give you the best experience on our website. If you continue to use this site we will assume that you are happy with it.OkNoPrivacy policy