I love the 1999 film The Mummy. The characters, the setting, the action with a smidge of horror, the romance…. Altogether, it makes a fantastic film. So when the sequel came out, I got excited. Released in 2001, The Mummy Returns takes place ten years after the original story. All of our favorite characters, Evie and Rick, Jonathan and the Medjai, the descendants of Pharaoh’s bodyguards, and Imhotep himself are all back in this sequel. We also meet Rick and Evie’s eight-year-old son, Alex O’Connell.

The Mummy Returns begins by telling us the legend of the Scorpion King, a mythical warrior who sold his soul to the god Anubis in exchange for using the God’s army to defeat his own enemies. There is a bracelet, the Bracelet of Anubis, that wakes up Anubis’ army and the Scorpion King. Whoever defeats the Scorpion King controls the army.

As the Year of the Scorpion begins, Evie O’Connell, the heroine of the first film, begins having visions. In her visions, she is in Ancient Egypt. These visions led her and her family to the Bracelet of Anubis. They bring it back home, where Alex puts it on. He is surprised to learn that it is actually a map that will lead him to the Oasis where the Scorpion King was buried.

However, others are interested in the bracelet, and not for research. A team of curators and archaeologists, led by a woman named Meela, are looking for Imhotep. Finding him, they bring him back to life, hoping to have him battle the Scorpion King and rule the world. When he learns that Meela is the reincarnated Anck Su Namun, Imhotep feels like nothing can stand in his way.

In the end, the O’Connells and the Medjai have to face Imhotep, Anck Su Namun, the Army of Anubis, their own pasts, and the Scorpion King himself. Not only are their own lives in danger, the fate of the world hangs in the balance. 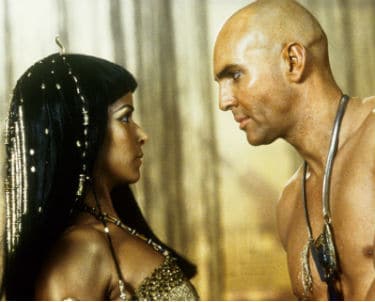 This film has a more complex plot than The Mummy. There’s a lot happening, and a lot to keep track of. This is both great fun and kind of annoying. You have to be paying close attention for things to make sense.

A fun plot thread, however, was the reincarnation subplot. It turns out that the Pharaoh killed by Imhotep and Anck Su Namun had a daughter, Nefertiri. Nefertiri was the guardian of the Bracelet of Anubis, and the one who alerted her father’s bodyguards that Pharaoh was in danger. Her spirit is now in Evie, while Rick is the reincarnation of one of Pharaoh’s bodyguards. This ties all the characters together even more and was a great nod to the original 1932 horror classic.

Thankfully, The Mummy Returns has the same fun mix of action/adventure, horror, and romance as the original film. The biggest difference is that this time, Evie and Rick are married. We see that although their relationship has grown and changed in the last ten years, they are still very much in love. The two of them still argue, but they are still willing to risk their lives for each other. Evie and Rick also love their son, Alex and fly into danger to save him, while he risks his life for them.

Evie and Rick’s relationship stands out when compared to a different relationship. This was the love that started it all, the love of Imhotep and Anck Su Namun. Although she worked tirelessly to bring him back, their love is not as strong as Rick and Evie’s. Imhotep risks everything for Anck Su Namun. He gives his life for her. In the end, she runs away from him when he needs her, and it destroys him.

The music is still epic. The film also works hard to fit into the 1930s ideal. It is believable as taking place ten years after the original film, and I appreciate that. The biggest issue with this film is that some of the CGI did not age well. The Army of Anubis looks cool, but the Scorpion King himself looks a little like a video game character. Also, the scene at the end with the falling rocks looks a little iffy. To be fair, they couldn’t drop actual rocks on the actors, so I suppose I should give them a pass.

I thought it was very interesting that, for the fight scenes between Anck Su 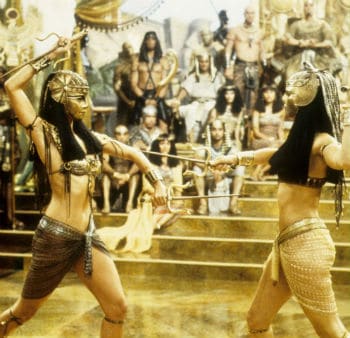 Namun and Nefertiri, Patricia Velasquez and Rachel Weisz did their own fighting. The character of Evie, while she still has her spunk, is also now a fighter. This is both because of her memories of her past life and ten years of marriage to Rick O’Connell. Meanwhile, Rick is less of a skeptic, but still has his sense of humor and his love for Evie. Jonathan is, of course, still the same mischievous fellow.

Like The Mummy, The Mummy Returns is a solid film. There are moments of horror, violence, fantasy, romance, and action. It’s a little cheesy and campy at times, but that’s one of the reasons I love it. The characters that you love, or love to hate, from the first movie are back and while it’s been ten years, they’re still the same at heart. It’s a fun and exciting return to a familiar world. If you enjoy The Mummy, I’d recommend The Mummy Returns.

Where to Watch: The Mummy Returns is available to watch on Amazon Video, Vudu, and iTunes. The Mummy is also available on DVD.

Have you seen The Mummy Returns? What are your thoughts on this film?

Our romance-themed entertainment site is on a mission to help you find the best period dramas, romance movies, TV shows, and books. Other topics include Jane Austen, Classic Hollywood, TV Couples, Fairy Tales, Romantic Living, Romanticism, and more. We’re damsels not in distress fighting for the all-new optimistic Romantic Revolution. Join us and subscribe. For more information, see our About, Old-Fashioned Romance 101, Modern Romanticism 101, and Romantic Living 101.
Pin this article to read later! And make sure to follow us on Pinterest.
By Bailey Cavender on September 11th, 2017