Dunkirk (2017): A Study in Desperation, Exhaustion and Scurrying Survival 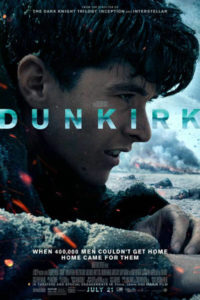 The accolades are raining down on British director Christopher Nolan’s latest and, what many are heralding, his greatest movie to date. The man behind the hugely popular Dark Knight Trilogy, Memento, Interstellar, Inception, The Prestige, has taken on a historical subject matter this time around.

Dunkirk is based, as its namesake suggests, on the historic WWII battle that occurred on the beaches of Dunkerque, France, from late May to early June 1940 between the retreating Allied forces and the Nazi troops. For ten days, the Allied troops, some 400 000 of them, mostly British and French, were trapped on the shores of the English Channel, stuck between a rock and a hard place.

The Germans are in the dunes, having pushed the Allies to the shores. There is no escape. This is a hasty retreat. This war is not going to be won so readily as first thought. Upwards of 400 000 men are trapped on a beach, awaiting salvation. They are sitting ducks. They need to be rescued.

This is the story of Dunkirk – a retreat and a rescue.

Desperate Men on a Beach

Dunkirk is one long, very beautiful – if violence can have its beauty – very riveting study in desperation. Tired, oh so tired, men, many just boys, want to get off that beach, want to go home. They do not want to be there – guns flaring, bombs falling, torpedoes churning.

However, it is not a historically accurate documentary, with all the many facets of the battle and its agents. Rather, Dunkirk is a nonlinear narrative, focusing on three story threads – a week’s worth of rescue efforts on land, a day’s worth of rescue efforts at sea, and an hour’s worth of rescue efforts in the air. Naturally, all these threads end up being woven together. The storylines cut between dogfights in the movie’s apparent present to never-ending lineups on the mole/pier, awaiting the next ship and the next bombs overhead and the next array of bullets from the dunes and the next unseen U-boat with its unseen arsenal, to hardy civilians crossing the channel in personal boats to aid in the rescue of these troops. 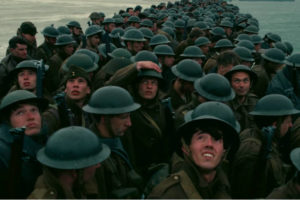 Look up, look below, look back – the dangers are everywhere on the beach at Dunkirk for those awaiting rescue. Photo: Warner Bros./Syncopy

The Mole and the Best-Laid Plans

On land and at the mole, the main focus is on a young soldier (Fionn Whitehead), who pretty much says nothing for most of the film, and his even more silent companion (Aneurin Barnard). They scurry from one near-death situation to another, from one hope of escape to another. Bodies litter the beach, float in the water, disappear into the depths, drop in the dunes, but there is no time to stop, mourn, deliver a heartfelt soliloquy, pull out that tattered photo of home. There is only survival. Run there. Swim there. Jump off there. Swim again. Hang on. Climb up. Duck down. Bail out. Swim again and again and again. Scurry from one thing to another. Survive, just try to survive.

The best-laid schemes o’ mice an’ men
Gang aft agley,
An’ lea’e us nought but grief an’ pain,
For promis’d joy! – Robbie Burns

There is a certain Wile E. Coyote tragedy to it all. All these desperate plans to get off that beach, all these attempts, and still rescue remains elusive. It all goes awry again and again. It is almost guffawingly farcical, but the film never goes over into the consequence-free, cartoonish grotesqueness that is farce. No tears, no laughter, just desperate scurrying to and fro, with a poignant scene in the belly of a leaky boat about who should ascend to certain death. There our silent heroes speak.

The Sea and the Air

At sea, the story focuses on a middle-aged man (Mark Rylance), whose boat has been requisitioned by the Royal Navy, to be a part of this flotilla of civilian watercraft to descend upon the beaches at Dunkirk to rescue the troops. Instead of waiting for the Navy, he sets off with his teenage son (Tom Glynn-Carney) and another lad (Barry Keoghan), both on the cusp of being declared conscription ready. The story lines begin to converge, as these three start fishing soldiers out of the brink.

In the air, the beautiful flyboys (Jack Lowden and Tom Hardy), whose pretty mugs are covered up for most of the film, attempt to protect the British rescue effort from German planes picking off boats and queued up soldiers. Cinematographically, this is some rather fantastic footage. You are in the cockpit, experiencing the limits of visibility, willing the screen to be a bit wider, so you can catch sight of that enemy fighter.

All these storylines, all these characters, mesh into a powerful and compelling narrative and a thought-provoking film. Morality in praxis, principles in the field, ethics being exercised – the film considers what defines us and our split-second decision-making when under duress. Pushed to the limits, what do we choose, how do we choose to be? Or is there no choice, but primal instinct? Yes, many thoughts on the nature of humankind and our purpose have churned in my mind since seeing Dunkirk.

The accolades are well deserved. The cast is wonderful. Besides those already mentioned, there is Kenneth Branagh, James D’Arcy, Cillian Murphy, Harry Styles, and Michael Caine even has a voice cameo. Overall, Dunkirk is desperately beautiful, exhaustively gripping and thoughtfully stimulating. See it while you can on the big screen.

RELATED: Wartime Romances In Film: A Look Back

Content Note: Rated PG-13 for violence and some very minor usage of strong language (you can count the number of swears on one hand). This is a war movie, so it is very intense, violent things happen pretty much all the time, people die, but the blood, guts, and gore are kept to a minimum.

Where to Watch: In theaters worldwide.