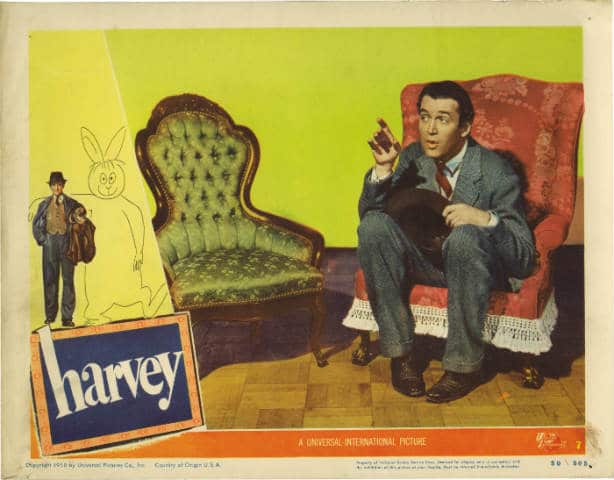 Elwood P Dowd lives a perfectly contented life. His happiness is enhanced by liquor and his best friend, a very tall, invisible white rabbit named Harvey, whom he loves to introduce to everyone he meets. Elwood never meets a stranger and is very considerate of and interested in others, even if everyone thinks he is a bit crazy.

Elwood shares his home with his long-suffering sister Veta who has been very patient with him and his unusual friend. But when a party to introduce her daughter Myrtle Mae to some nice people is disrupted by Elwood and Harvey, Veta determines the best course for everyone is to have her baby brother committed to the local sanitarium.

However, as she proceeds along this set course there is some question over which family member is truly crazy. And Elwood’s genial, understanding nature brings into question if insanity is perhaps preferable to reality.

Who would ever think that a film about a man’s friendship with an invisible animal would not only be entertaining and funny, but also thoughtful and charming? But that is exactly what Harvey achieves.

Through the character of Elwood P Dowd, many deep questions are raised and the meaning of life is examined. One of the most important themes raised is that the opinions of others and how they treat us is not nearly as important as how we treat others. Elwood is the perfect example of this as the wary, suspicious glances and comments of others follow him constantly. Yet he never allows this to influence his responses or interest in other people, treating everyone he meets with respect and genuine attention.

Another question which arises is what kind of life is one of value? Veta and Myrtle Mae are eager to be part of the social whirl of their town. They are distraught and angry when Elwood’s eccentricity is revealed and ostracizes them. They constantly worry about what Elwood may be up to or who he might meet. This makes them miserable and unable to appreciate their blessings, so to speak. Yet despite an allusion to a past of position and influence, it is obvious that Elwood is much happier and at peace in his current state. No matter what circumstance or person confronts him he remains calm and with a positive outlook on life.

Ultimately, each of the film’s characters, including the medical professionals who come to know Elwood, must decide what the definition of insanity is. Is it preferable to be fully aware, worried, conflicted and miserable? Or perhaps it is better to accept something outside the norm if it makes someone a better, more loving individual?

“He’s going to come out of there a perfectly normal human being, and you know what stinkers they are.”

THE BENEFIT OF EXPERIENCED ACTORS

The acting in this film is exceptional and it is the skill of the actors which keep this story from veering into the ridiculous. Instead, they create something which is utterly sincere and moving. James Stewart is the affable Elwood P Dowd. For those unfamiliar with classic films, you might recognize Stewart from that annual Christmas classic, It’s a Wonderful Life. He is just as lovable and earnest in Harvey as he is in that other film. He infuses Elwood with a vulnerability and charm which causes everyone including the audience to fall in love with him.

Harvey originally debuted on Broadway before becoming a film and Stewart did have the opportunity to play the part of Elwood P Dowd before bringing it to the big screen. His experience shows in the level of comfort he has playing Elwood and Stewart claimed it was his favorite role of all his films.

Another cast member from the play who appeared in the film is Josephine Hull. She is absolutely brilliant as Elwood’s sister Veta, who doesn’t believe her brother’s best friend is real. Or does she? She is a perfect contrast to her younger brother, an emotional, nervous wreck of a woman whose grip on her own sanity may be questionable.

Although Harvey is a film with a deeper meaning, that doesn’t preclude it from being absolutely hysterical. And most of those funny moments come courtesy of Josephine Hull. Her reactions, her facial expression, and body movements, her spontaneous comments, all elicit much laughter. If Elwood is the calm than Veta is the manic storm swirling around him. She is a character which could be easy to dismiss as utterly silly, yet she elicits compassion and understanding too. No matter how many times I watch Harvey, I break out into laughter every time and so will you.

I dare you not to be drawn in by this fantasy-comedy. You might even find yourself wishing for a friend just like Harvey.

At first glance, Harvey may not be a film which would appeal to many people. The story is far-fetched, the characters could be easy to ridicule and there is no great romance (something which I prefer). Yet, Harvey casts a unique spell with its charm, humor, and warmth, while also making the viewer consider deeper issues. I dare you not to be drawn in by this fantasy-comedy. You might even find yourself wishing for a friend just like Harvey.

Content Note: There is little objectionable material. As with many classic films, alcohol and drinking are present, but drunkenness is never displayed.

Where to Watch: Harvey is available on DVD and many streaming platforms including Amazon.

Have you seen Harvey? Let me know your thoughts on this charming classic film!

Our romance-themed entertainment site is on a mission to help you find the best period dramas, romance movies, TV shows, and books. Other topics include Jane Austen, Classic Hollywood, TV Couples, Fairy Tales, Romantic Living, Romanticism, and more. We’re damsels not in distress fighting for the all-new optimistic Romantic Revolution. Join us and subscribe. For more information, see our About, Old-Fashioned Romance 101, Modern Romanticism 101, and Romantic Living 101.
Pin this article to read later! And make sure to follow us on Pinterest.
By Brittaney B. on July 22nd, 2017