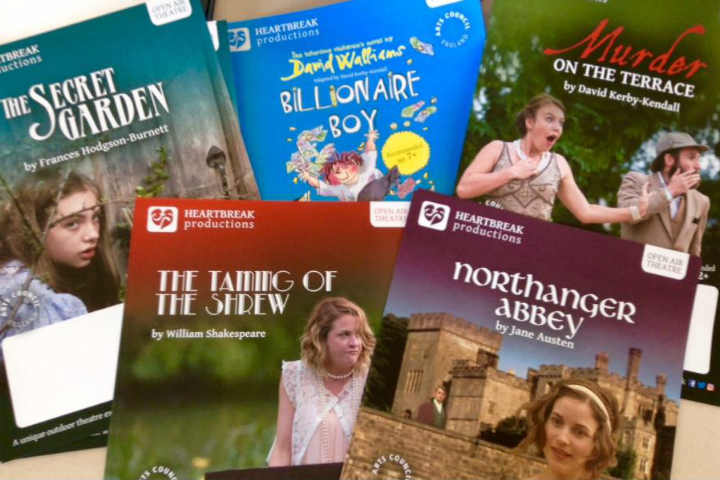 Have you ever been to the theatre? How about an open air performance? Until I experienced it myself, I didn’t realise how enjoyable open air theatre can be. There is just a different type of energy and aura about it. One that elevates the performance to a different level. It makes one feel more alive somehow.

“All the world’s a stage,
And all the men and women merely players”

Have you ever heard of Heartbreak Productions? I hadn’t until I accidentally came upon a big poster advertising five open air theatre productions while taking a walk in a local park. It turns out that for the last several years this production company has been putting on several such performances and touring the UK every summer. Now that I have been to two of their performances, I am glad that I paid attention to that poster and turned up to the performances.

On a fine English day – yes, that includes the wet ones.

With the ever fickle English weather, I bet you’re not so sure you want to book tickets ahead of time let alone turn up to an outdoor event when it’s raining. I’ve been lucky enough to experience both extremes of the spectrum this year. “The show must go on,” and it does, even through the on-stop rain. It’s impressive seeing the actors move through a performance not giving away the slightest hint that they are wet and freezing. Now that’s commitment! According to their website, only torrential rain would keep the actors away from the calling of the stage.

So, having experienced open air theatre in both sunny conditions and in pouring rain (which has its own charms), I can heartily recommend such an event in any weather conditions that may come.

For those rainy days, you can choose to sit under the canopy provided. That way only the actors get rained on. Ha! 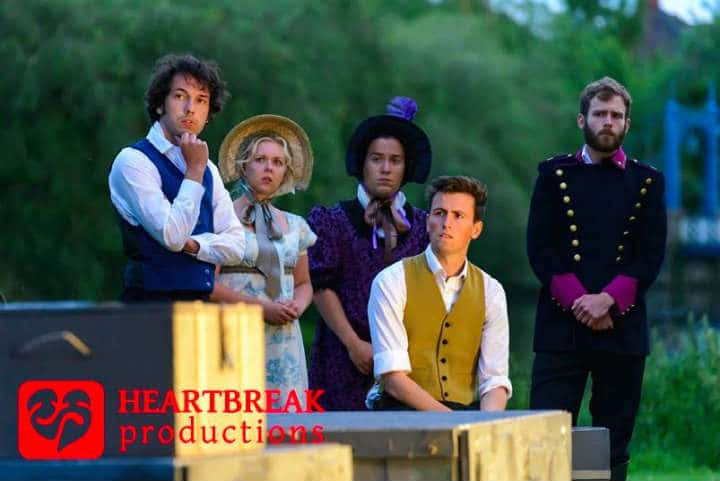 Murder on the Terrace

This is an original play written by David Kerby-Kendall. It’s a spoof Murder-Mystery and was written especially for Heartbreak Productions. From the get-go the actors make a point of stating that they were C.R.A.P. (Currently Resting Actors Production) to prepare the audience for the farcical fun ahead.

As a group of six, these actors managed to play the rich family, run off and promptly return dressed as the staff, and even dropped in as a band with a hilarious rendition of Bohemian Rhapsody. The audience is also encouraged to participate and ask the inspector questions. A couple of lucky audience members even get the honour of auditioning to be his side-kick for the evening.

Part of the mystery for me was whether the actors would make it through the performance without catching their death. Murder by rain was an explanation I was fully prepared to accept as the culprit. However, I was relieved to see the entire cast alive and well later that week at their performance of Northanger Abbey, which took place in much more favourable weather conditions.

I know this book like the back of my hand, so I was not expecting to be surprised by the interpretation. The performance took place at Jane Austen’s Writing Club where members like Mary Shelley, Wordsworth, Jane Austen herself, and several other famous English writers took it upon themselves to improvise a Gothic romance, which just happened to be called Northanger Abbey. We still get to watch our favourite scenes played out, but the writers take on different roles themselves and discuss the effectiveness of different elements. It was a hoot and my favourite performance of the two!

Since they make unusual interpretations of the classics, I may even check out The Taming of the Shrew. I usually only enjoy that story in its modern retelling format. And yet, I may brave it this time.

The only thing to bear in mind is that the shows are quite suggestive. At least these two were. Especially Murder on the Terrace. Children nowadays tend to be extremely precocious and catch these hints easily. I would hesitate to bring anyone under 15 to these performances because the hints just kept popping up. However, this is fun for the whole family. Most of the humour was completely harmless, but older children will appreciate it more. Older children, to me, is anyone from 13 and upwards (to circa 113 years of age).

So bring a chair, blanket, food (and even wine if you like) and experience something truly unusual, fun, and enjoyable. You will be imbued with positive energy that the actors are just bursting with!

Prepare yourself to have dashing men in Mr. Darcy-like attire read love poems to you. Be still my heart!

Something that really makes these performances stand out from the rest is the audience participation. It’s a very clever way of engaging the audience. The cast will even keep you entertained during the interval. Prepare yourself to have dashing men in Mr. Darcy-like attire read love poems to you. Be still my heart!

My suggestion is also not to dress too lightly. The actors move, but you will be sitting throughout the performance so it can get chilly if one does not choose one’s attire appropriately. Blankets are a must for wrapping around oneself even if one sits in a chair. We also brought a thermos with tea, which I strongly recommend.

The current season finishes at the end of August 2017. You can even buy tickets at the door, so to speak. This summer Heartbreak Productions are touring with The Taming of the Shrew, Northanger Abbey, The Secret Garden, David Walliams’s Billionaire Boy, and Murder on the Terrace. If you can’t make it or the tour has already moved on from your parts of the UK, make sure to make a note of it for next year. Find out everything you need to know about these open air theatre events on their official website:

A play, no matter how well written, will feel very different depending on the cast that takes it on. This cast made the experience a wonderfully enjoyable one. I wish nothing but the best for these young actors in the future!