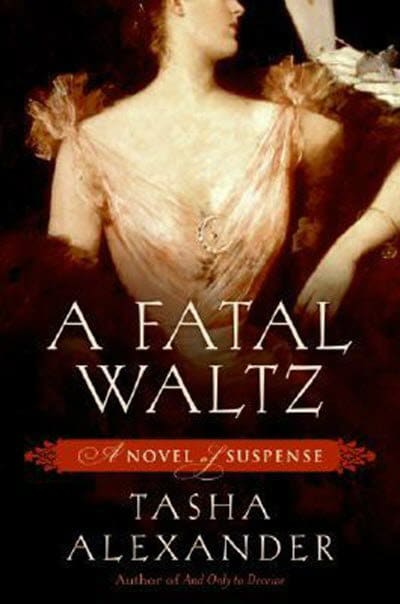 A Fatal Waltz finds Lady Emily Ashton as a reluctant guest at a weekend party at the country estate of Lord Basil Fortescue, a man she finds as personally odious as he is politically powerful. But if she was expecting Lord Fortescue to be the greatest of her problems, she was wrong. Her host also included Kristiana von Lange among the guests, an Austrian countess once linked romantically with Emily’s fiancé, Colin Hargreaves.

Both Lord Fortescue and the countess delight in tormenting Emily, but petty malice turns deadly serious with the murder of Lord Fortescue. The police arrest his protégé, Robert Brandon – Ivy’s husband – for the crime. Emily’s efforts to clear Robert’s name take her to Vienna. Glittering balls, sordid back streets, chic cafes, and even the Imperial palace yield fragmentary clues, but not until Emily engages a notorious anarchist in a game of wits does the shocking truth begin to emerge: The price of exonerating Robert is placing Colin in deadly peril. And the one way Emily can ensure his safety is to strike an unthinkable bargain with her nemesis, the Countess von Lange.

What is striking about the third novel in Tasha Alexander’s Lady Emily series is the intimacy. Romance and mystery are deeply entwined in A Fatal Waltz. This time, the stakes are deeply personal for Emily. As a result, A Fatal Waltz is more character-driven than previous novels. First, there is a new sense of unease and doubt in Emily. Not in her skills as a sleuth, but in herself. After meeting the Countess von Lange, Emily finds herself in the strange position of feeling inadequate. Not only in thought but in action and appearance.

“Being this near to [the countess], I felt utterly inadequate, washed out in the face of her brightness–too thin where she was curvy, my youth and inexperience paling next to her sophisticated wisdom.”

To complicate matters, Emily must face the depth of the Duke of Bainbridge’s feelings for her. This does not go unnoticed by anyone and serves to confuse Emily all the more. All of this serves to make Emily question herself and her decisions as the story progresses. Perhaps that wasn’t the author’s intent, but that is how the story unfolded for me. Personally, I liked seeing this side of Emily.

Emily is normally so supremely confident, never in obvious distress. Yet, in A Fatal Waltz, Emily suddenly finds herself floundering. This is not an emotion she enjoys. Adding to her unease is Lord Fortescue’s apparent pleasure in causing her discomfort. However, none of this detracts from the character we’ve grown to know and love over the last two novels. On the contrary, it adds an emotional layer that was previously missing. Emily is relatable without becoming a cliché.

Related Post: A Poisoned Season – When Scandal and Murder Combine

Colin’s work for the Crown takes him all over the continent. Unfortunately, he doesn’t control those trips and their wedding is postponed. After agreeing to marry within the next month, their plans are once again delayed by the good intentions of Emily’s mother. As a result, the romantic tension between Emily and Colin ratchets up several notches. The rules of society still prohibit them from being alone together. So, they rely on stolen moments. Hallways become opportunities for stolen kisses. Sofas are a fantastic excuse for sitting closely so that their hands may touch. However, the rules change in Vienna. The passion between them grows in each chapter.

“When [Colin] reached the top, he took me by the arms and in one swift motion pressed me to the wall and kissed me with an urgent passion.”

As the suspense increases, so do the stakes. The intensity bleeds over into Colin and Emily’s relationship. When there is a threat to Colin’s life, Emily begins to walk a delicate line. There are no secrets yet, but Emily doesn’t divulge every detail. Her fear for Colin hammers at her. Added to that is the Countess and her sly innuendos. Furthermore, her friendship with Tommy has become increasingly strained.

It would have been so easy to use Emily’s doubts as a tool to drive Emily and Colin apart. However, the author doesn’t fall into the oft seen trope of mistrust chipping away at a relationship. Instead, we see it become a tool of self-reflection for both characters. Colin isn’t as immune as he appears to be towards Tommy’s infatuation with Emily. He also begins to question the impact his career choice will have on Emily when she is his wife. Again, through Emily’s eyes, we see a new side to Colin. Learn his quirks and how they reflect his mood. Whether it’s avoiding her gaze, or pacing as he speaks, Emily knows the direction of his thoughts.

Related Post: The Clockwork Scarab (2013): Steampunk Sleuthing at its Most Fun

In the end, when Colin is at his lowest point, there is a distinct shift in his relationship with Emily. Together, they forge another link in their chain and it is by far the strongest.  The plot of A Fatal Waltz does suffer somewhat with so much focus on the characters. Yet, Emily’s voice saves the story, continuously engaging readers. Despite her doubts, Emily continues her search for the truth and proves that there is strength in vulnerability.

2 thoughts on “Book Review: A Fatal Waltz – Love and Intrigue in Vienna”