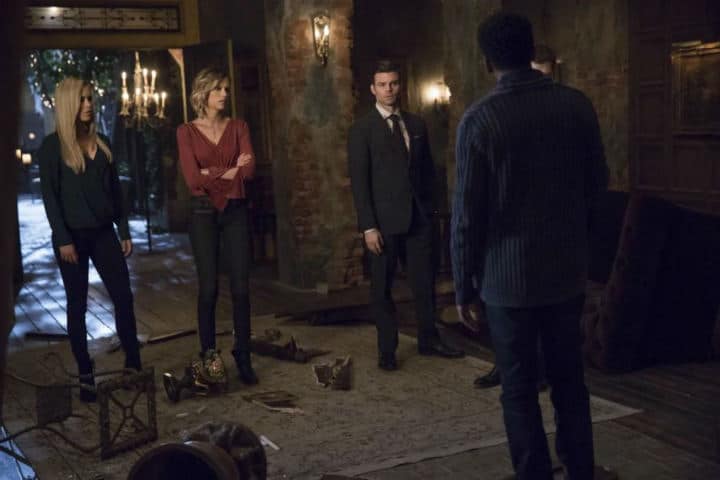 “THE FEAST OF ALL SINNERS” RECAP AND REVIEW

Since I last posted a recap (it’s been a while due to a VERY busy schedule), quite a lot has happened. Elijah died and then came back to life. Kol and Rebekah returned. The Hollow appeared in her natural form. Freya and Keelin grew closer. Elijah and Hayley are having relationship trouble. The Hollow possessed Hope. Davina came back to life and drove off into happily ever after with Kol. Oh. And it might be the end of always and forever. Which brings us to tonight’s finale, “The Feast of All Sinners.” Now, while it may not be the end of the series (though it was written as a possibility), it was showrunner Narducci’s swan song.

So, let’s discuss what went down in “The Feast of All Sinners.”

To defeat the Hollow, Vincent must separate The Hollow into four parts and put the different pieces of her soul inside each of the vampire Mikaelson siblings. So, Klaus, Elijah, Rebekah, and Kol (who thankfully shows up before Freya turns herself into a vampire). Unfortunately, there’s a catch. Not only can they never see each other again (so the Hollow doesn’t gain power) but they also can never see Hope again. 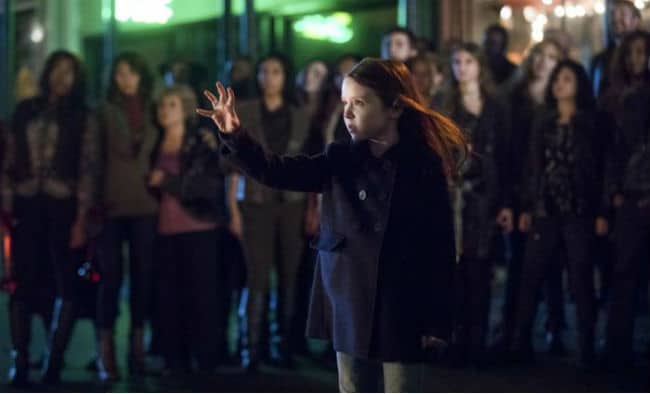 At first, The Hollow runs through New Orleans wreaking havoc with a recently resurrected Dominic. But with the help of Marcel (and Cami’s dark objects), they catch the Hollow, kill Dominic once again, and burn down the church (no more of this set next year) with all the loyal Hollow witches inside.

With Hope/The Hollow now in their possession, they all have time to say their goodbyes before their inevitable separation. The Mikaelson siblings (the most touching between Klaus and Elijah). Klaus and Marcel (this scene was AMAZING). Elijah and Hayley. Klaus and Hayley. And in the end, Klaus and Hope. 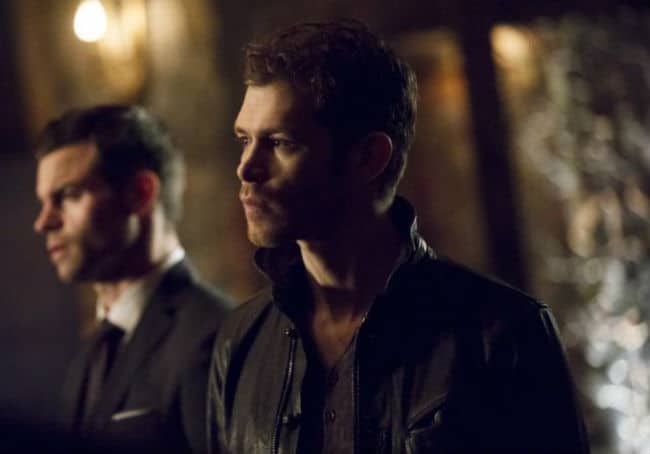 Vincent gathers the siblings together to perform the ritual. This is the beginning of their final goodbye as siblings. The end of always and forever.

“Maybe this will finally earn us our redemption,” Rebekah remarks. But none of them actually believe it. With a thousand years of monstrosities, redemption can’t be earned so easily.

And with that, Vincent starts the spell and pulls it off to success. One by one the Mikaelson siblings leave. Before Elijah leaves, he gives Hayley one last loving look. In the end, Klaus hesitates. He doesn’t want to leave his daughter even though he knows he must.

“I love you,” Klaus tells Hope. And then he superspeeds away with Hope crying after him.

In a surprising move, Elijah has Marcel and Vincent compel him to forget always and forever. He knows he’s a danger to his family and that he must remove the blind devotion to his brother. “I want you to set me free.” Together, Vincent and Marcel remove his memories and free him from a thousand years of the curse of always and forever.

Freya, meanwhile, takes her time visiting her different siblings. She also passes on a necklace from Rebekah to Hope. Still, Freya chooses to remain in New Orleans with Keelin as she looks for a way to fix this.

Elsewhere, in Mystic Falls, Hayley and Alaric have a lovely conversation. Hope has enrolled in the school of magic. And Alaric states with the goosebumps-inducing line: “These kids will be better.” If this had been the end of The Vampire Diaries/The Originals universe, that would have been the perfect final line.

And then the episode ends in the best, most fitting way possible. With time having passed (how much is unclear), we find Elijah playing music in a club/bar in France. He appears “free” and happy. Klaus checks on Elijah to make sure he’s okay. He breaks the rules one final time. Elijah acknowledges him with a nod and Klaus smiles. Klaus then leaves, planning to never see his brother, Elijah, again. (At least that was the vibe the scene gave me.)

There were quite a few romantic moments in “The Feast of All Sinners.” Klaus visiting Cami’s grave before giving his heartfelt apology as a father to Marcel. Keelin choosing to stand by Freya even if she becomes a vampire. Kol turning a diamond into a giant diamond engagement ring for Davina. And Hayley and Elijah with their tragic goodbyes. The “end” of their star-crossed romance.

But the actual standout romantic moment belongs to Marcel and Rebekah FINALLY getting their happy ending. Marcel finds Rebekah in New York City after breaking it off with Sofya (YAY!). He tells Rebekah that Sofya is gone. That she asked him to go with her but he chose to be with her instead. He tells Rebekah that she’s not the second choice. “I’m here!” Marcel then kisses her.

“You are free. And so am I. And nobody’s going to tell us we can’t be together. So what do you want to do?”

“You are free. And so am I. And nobody’s going to tell us we can’t be together. So what do you want to do?”

And with that Rebekah and Marcel come together after centuries of not being able (or, at times even willing) to be together.

It’s the perfect New York romantic moment. And much deserved.

REBEKAH: Always and forever. It was a good run. 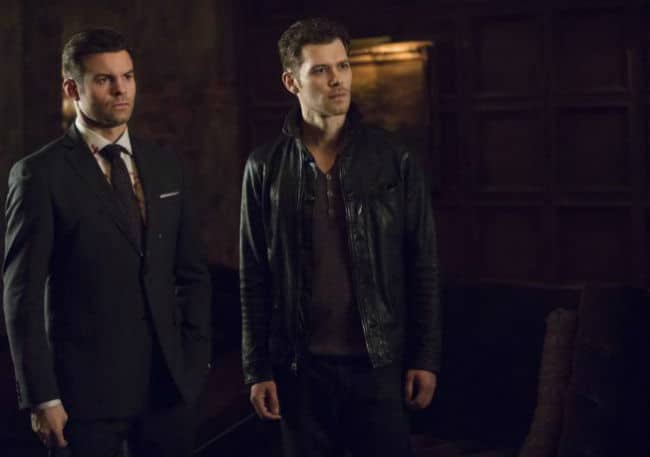 To be honest, I kind of wish this was the end of The Originals. Not because I’m no longer a fan or I don’t want to continue to watch these characters. But rather because this felt like the perfect, poetic ending to me. Nothing felt unsaid or unfinished. Sometimes, I have a hard time continuing to watch shows when they’ve already come to a natural, organic, and fitting end. This felt like the right ending for the series to me.

Like with Once Upon a Time, I question if this series should continue. Of course, with creativity, it can. But why? Narducci finished his run with a bang, making up for some lackluster episodes this season. And it’s hard to imagine finding a better way to close the story than “The Feast of All Sinners.” Everyone gets their redemption…sort of. Everyone gets a fitting ending even if it’s not always happy. And while some of it (especially with Klaus) is left open-ended, that feels right too. We can “imagine” what happens. Sometimes I like stories to end that way. And this finale ended with a nice mix between happy endings, bittersweet farewells, and open-ended (yet still complete) stories.

Daniel Gillies’ and Joseph Morgan’s performances at the very end were beautiful. I was especially touched by Gillies as Elijah. It felt like the “end” of Elijah’s story for me. His look of “freedom” as he played music was satisfying. From a storytelling perspective, it’s hard to imagine poetically ending “always and forever” and then bringing it back in the very next episode.

But alas, this was not the end. So, where then will Julie Plec take the show with Narducci gone? Clearly, she wants to connect the story to Mystic Falls. Perhaps season 5 will be a merging of The Originals and The Vampire Diaries and about the new school she originally wanted to be a spinoff.

Which begs the question, how much of a revamp of the show should we expect? Have all the regular cast members signed on for season 5? Will some be out? And others (perhaps even from The Vampire Diaries) be in? Personally, I hope the two series don’t merge too much as they both have very different vibes. And I appreciate the more adult, dramatic tone of The Originals with Shakespeare and Bronte like influence. Whereas, The Vampire Diaries nicely settled into a younger paranormal romance series with lots of “shipping.”

I really hope we don’t see too many unexpected and unnecessary pairings next season. That said, I’m open to seeing what’s next for these characters we all love!

NOTE: If you want to find out about Vincent’s ending in “The Feast of All Sinners,” check out this interview over at TVLINE. His scene was unfortunately cut.

Well, what did you think of “The Feast of All Sinners?” What do you think will happen next season? Let me know in the comments!

Our romance-themed entertainment site is on a mission to help you find the best period dramas, romance movies, TV shows, and books. Other topics include Jane Austen, Classic Hollywood, TV Couples, Fairy Tales, Romantic Living, Romanticism, and more. We’re damsels not in distress fighting for the all-new optimistic Romantic Revolution. Join us and subscribe. For more information, see our About, Old-Fashioned Romance 101, Modern Romanticism 101, and Romantic Living 101.
Pin this article to read later! And make sure to follow us on Pinterest.
By Amber Topping on June 24th, 2017

1 thought on “The Originals: The Feast of All Sinners Recap & Review – Always and Forever”