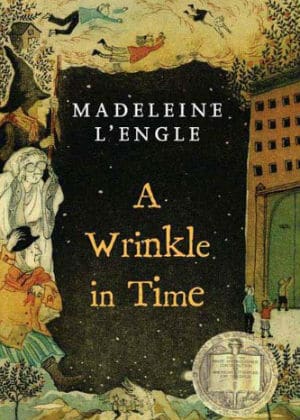 A Wrinkle in Time Vintage YA Book Review (1962)

I love to reread books from my childhood as an adult. Sometimes, the stories just wash over me as I remember a simpler time, but more often than not, I find myself learning something new. Wrapped up in the old and familiar texts are things I can still wrestle with, deep ideas hidden in the seemingly simple language.

RELATED Vintage YA Book Review: The High King, or The Grand Finale

The books of Madeleine L’Engle are always like this for me. Whenever I read A Ring of Endless Light or The Arm of the Starfish, I find myself thinking about the meaning of life, and whenever I pick up The Time Quintet, I am amazed by how much L’Engle has put in those five books and how much she throws at her readers. Full of science and faith, A Wrinkle in Time, a Newbery Award Winner, takes readers from a small New England town to the distant planet Camazotz, home of the sinister IT.

In A Wrinkle in Time, L’Engle introduces readers to the Murray family. The Murrays live in New England and are an incredibly intelligent family. Our heroine, Meg Murray, is a fish out of water. Plain, good at math but bad at school, and feeling overshadowed by the rest of her family, Meg struggles in class. Her twin brothers, Sandy and Dennys, are able to appear normal, both her parents have Ph.D.’s, and her baby brother Charles Wallace is a genius.

Her father, Dr. Murray, has gone missing. While the rest of the town snickers and laughs, the Murrays are sure that something sinister has happened to him. Meg and Charles Wallace, out for a walk, meet Calvin O’Keefe, a neighbor who fits in surprisingly well with the Murray family. The three of them meet three mysterious women, Mrs. Whatsit, Mrs. Who, and Mrs. Which, who are more than they seem.

Learning from the three that Dr. Murray is in grave danger, Meg, Charles Wallace, and Calvin set out on an adventure to find him and bring him home. The stakes are high, however, and their quest will decide more than their own lives.

While Meg is preoccupied with saving her father, the three Mrs. Ws remind her that this quest is larger than that. The fate of the universes hangs in the balance. Dr. Murray is being held by IT on Camazotz and the smart and precocious Charles Wallace is a key player. IT looks to control all people and assimilate them, and IT wants to add Charles Wallace to IT’s mind.

Charles Wallace is warned about falling prey to his pride and thinking he can outsmart IT, but his curiosity is too great. Meg and Calvin save Dr. Murray, but because of his own pride, they lose Charles Wallace. Meg, however, will not give up her family without a fight. Can Meg save her family and the world? Where did these three ladies come from? And what is stronger than hate? You’ll find the questions to these answers in A Wrinkle in Time.

The characters in A Wrinkle in Time are wonderful. Meg is a dork who feels overshadowed by the people around her but has a lot of strong characteristics. These people can see her strengths, even if she can’t. As the story goes on, she grows into herself and begins to see these things for herself. Her love for her family is strong and leads her to take on many fights and adventures for them.

Meg is the main character in the story, but the other characters are an important part of the story as well. The Murray family is well-written and their interactions feel like those of a real family. Of course, most families don’t have a younger brother who can read minds, but Charles Wallace is a special case. Calvin O’Keefe is also a wonderful character.

The love stories in A Wrinkle in Time are very sweet. The first one is the romance between Drs. Murray. These two people, although they are separate during most of the story, are clearly in love. This love binds the Murray family together in a strong way and makes the ending that much sweeter.

The second love story is the one between Meg and Calvin. These two are young, so it’s just the beginning of their romance, but they work well together. Meg and Calvin are different in many ways, but they still have a lot in common. Both of them are smart and determined to learn. They complement each other and I remember loving the way that their relationship unfolded as the series went on.

A Wrinkle in Time is a serious story that also takes its readers seriously. Sure, the characters can travel by bending time and space, but the story deals with the struggle between good and evil, between love and hate, and how one person can actually make a difference in a cosmic fight.

There is a beautiful blend of science and faith in A Wrinkle in Time that L’Engle manages to find. It seems effortless, but it must be a challenge to find that balance. The science informs the faith and the faith is supported by the science.

The ideas are timeless, and L’Engle writes her story so that every time you read it, you learn something new.

The ideas are timeless, and L’Engle writes her story so that every time you read it, you learn something new. That’s why A Wrinkle in Time is a book that I read every year, and I keep coming back to the books of Madeline L’Engle year after year.

Our romance-themed entertainment site is on a mission to help you find the best period dramas, romance movies, TV shows, and books. Other topics include Jane Austen, Classic Hollywood, TV Couples, Fairy Tales, Romantic Living, Romanticism, and more. We’re damsels not in distress fighting for the all-new optimistic Romantic Revolution. Join us and subscribe. For more information, see our About, Old-Fashioned Romance 101, Modern Romanticism 101, and Romantic Living 101.
Pin this article to read later! And make sure to follow us on Pinterest.
By Bailey Cavender on June 22nd, 2017