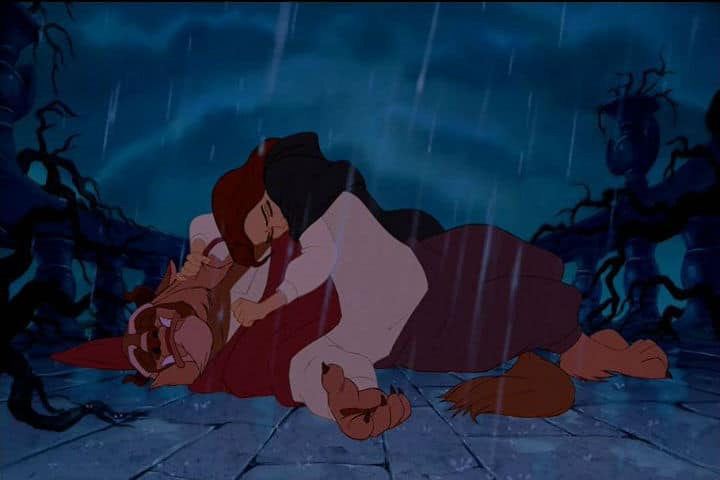 Romance in the Rain

Rain, usually torrential, always serves to heighten the emotion of any particular scene. For instance, if that scene happens to be romantic, then it can create something special. Whether that emotion is joy, sadness, guilt or heartbreak, the rain usually makes it all the more memorable. So, here are twelve memorable rain-drenched romantic scenes for you to enjoy.

The Scene: Belle returns to the Beast but Gaston stabs him in the side as they reunite. Then, she confesses her love as he dies, breaking the curse.

Where to Watch: Beauty and the Beast (1991) is available to buy on Amazon Video and on DVD.

The Scene: Marianne has gone for a walk in the rain. Colonel Brandon discovers that she has been gone for some time. So, of course, he goes out to find her and returns carrying her, both of them soaked to the skin.

Where to Watch: Sense and Sensibility (1995) is available on Amazon Video and on Netflix UK.

The Scene:  While out rowing, Allie and Noah are caught in a rainstorm.  As they pull ashore, Allie confronts Noah about the letters.  The truth finally comes out and they share a passionate kiss, realizing that their story is far from over

Content Note: The film is rated PG-13 and has some scenes of mild sexuality.

Where to Watch: Amazon Video and DVD.

#4 Pirates of the Caribbean: At World’s End

The Scene: Amidst a rain-drenched sea battle, Will and Elizabeth get married. It is their only chance after all. Barbossa does the honors as ship’s captain, while all three continue to fight off the enemy.

Where to Watch: Netflix Canada, Amazon Video, and DVD.

The Scene: Catherine Morland and Henry Tilney get caught in a shower while out riding. Once inside Henry helps her to dismount and tenderly brushes the dirt off her cheek, letting his hand linger for a moment. Swoon!

The Scene: Austin sees Sam leaving during an important game. He finally stands up to his father, quits football and runs after her to apologize. They share a kiss during the first rain after a long drought.

Where to Watch: Netflix, Amazon Video, and DVD.