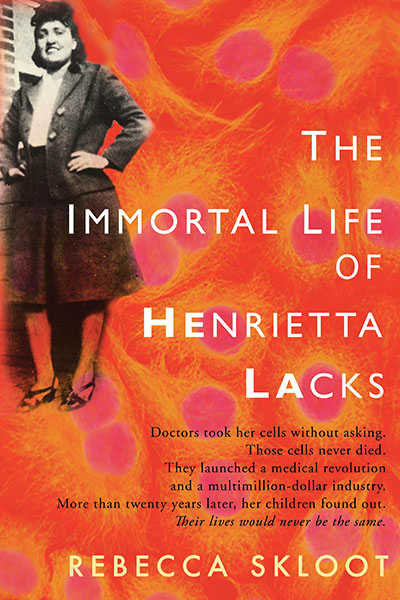 I’ve been a part of a patchwork group of colourful characters who form my monthly book club, NovelT. For more than a year, we have read a variety of books. Some were really good and others laughable or mediocre. Last month, a male member of my group chose The Immortal Life of Henrietta Lacks as our monthly read. I had never heard of the book, nor of the author, Rebecca Skloot. This book has sparked the most fascinating debates amongst my book club. We’ve grappled with ethics, science and the reality that this was in fact not a work of fiction, but very much a heartbreaking true story.

A young, African-American woman who was raised in the tobacco fields of Virginia is the subject of The Immortal Life of Henrietta Lacks. She was a vivacious, beautiful woman who married and birthed five children. At the age of 30 however, she died from an aggressive cancerous tumor, dimming her bright light prematurely.

RELATED: Things I Should Have Known Book Review – The Perfect YA Read for Autism Awareness Month

In The Immortal Life of Henrietta Lacks, Rebecca Skloot recounts her 10-year journey to try and piece together the life of this remarkable woman. As it turns out, in 1951 when Henrietta lay in the “colored” ward of Johns Hopkins to seek treatment for her cancer, her tumor was biopsied without her permission.

Like many doctors of his era, TeLinde often used patients from the public wards for research, usually without their knowledge. Many scientists believed that since patients were treated for free in the public wards, it was fair to use them as research subjects as a form of payment.

While this was common practice at the time, what was not was the ability of human cells to survive once outside of the human body. Henrietta’s cells were, therefore, the first human cells to not only survive but also to boisterously self-reproduce. This was akin to a medical miracle.

Henrietta’s cells, (HeLa – named so after the first two letters of her first and last name) essentially revolutionized medical research, making her the effective godmother of virology. Her cells spread across the globe, proving instrumental in the development of a polio vaccine. In addition, her cells helped uncover the secrets of various forms of cancer, lead to advances in cloning, gene mapping and led to the understanding that normal human cells have 46 chromosomes. If this was not enough, NASA launched HeLa into space in order to test how human cells would react when encountering zero-gravity!

HeLa launched careers and was bought by millions to advance medical research. Now, more than half a century later, Henrietta’s cells have yielded an estimated 50 million tons of HeLa cells with more than 60 000 HeLa related medical studies published. Despite all of this, Henrietta Lacks was buried in an unmarked grave. Sadly, hundreds of millions of people across the world have no idea who this remarkable woman was. In fact, her family didn’t even know what their mother’s cells had helped accomplish until many years later. Imagine having no idea that your mother is the modern day equivalent of Isaac Newton or Albert Einstein…

What Rebecca Skloot does in The Immortal Life of Henrietta Lacks, is introduce the reader to Henrietta, the woman and the mother. Her story traces Henrietta’s early history, weaving the past and the present into a coherent and powerful story underscored by the interplay of race, poverty and one of the most important medical discoveries of the past century.

Oh jeez, she’s a real person… I started imagining her sitting in her bathroom painting those toenails, and it hit me for the first time that those cells we’d been working with all this time and sending all over the world, they came from a live woman. I’d never thought of it that way.

While The Immortal Life of Henrietta Lacks is a work of non-fiction, it reads like fiction. There are elements that seem so coincidental, sometimes so astounding, that it surprises that this tale is indeed a truthful account of Henrietta’s legacy.

The Science of Ethics

The book focuses not only on Henrietta’s life but also on her legacy. Skloot introduces her children and their journey in coming to terms with what their mother’s cells mean to the scientific community. Mostly, however, the story is underscored by the tragedy that characterizes the Lacks family. It continuously raises important questions about ethics and fairness. While Henrietta Lacks’s cells have accomplished so much, her family has not profited in any way from the almost unquantifiable impact her cells has had on medical research. They are poor, as poor as they have arguably ever been.

“You know other countries be buying her for twenty-five dollars, sometimes fifty?” Henrietta’s cousin Cootie comments. “Her family didn’t get no money out of it.” A simple statement summing up one of the major moral dilemma’s surrounding Henrietta’s cells.

One of the most moving scenes is where Skloot accompanies the Lacks family to a lab. It’s the first time they get to “see” their mother’s cells. A researcher explains what HeLa was, how the cells divide and what they have helped achieve. Henrietta’s children touch vials filled with HeLa and watch as, under a microscope, her cells divide into two.

“You’re famous,” Deborah whispers to her mother’s cells. “Just nobody knows it.”

The Immortal Life of Henrietta Lacks touched me deeply. The storytelling is crisp, thought-provoking and evocative. It explores social injustice, the pursuit of medical advancement and begs the question, “but at what cost?”

HBO has adapted The Immortal Life of Henrietta Lacks for television. Oprah Winfrey’s HARPO studios has produced the film in which she also stars alongside Rose Byrne, Courtney B. Vance and Renée Elise Goldsberry as Henrietta Lacks.

Awards: Among others, The Immortal Life of Henrietta Lacks was awarded the National Academies Best Book of the Year Award, the American Association for the Advancement of Science’s Young Adult Science Book Award and the Wellcome Trust Book Prize.

Have you read The Immortal Life of Henrietta Lacks? If you have, what did you think? Comment below and let me know!

Our romance-themed entertainment site is on a mission to help you find the best period dramas, romance movies, TV shows, and books. Other topics include Jane Austen, Classic Hollywood, TV Couples, Fairy Tales, Romantic Living, Romanticism, and more. We’re damsels not in distress fighting for the all-new optimistic Romantic Revolution. Join us and subscribe. For more information, see our About, Old-Fashioned Romance 101, Modern Romanticism 101, and Romantic Living 101.
Pin this article to read later! And make sure to follow us on Pinterest.
By Naazneen Samsodien on May 23rd, 2017