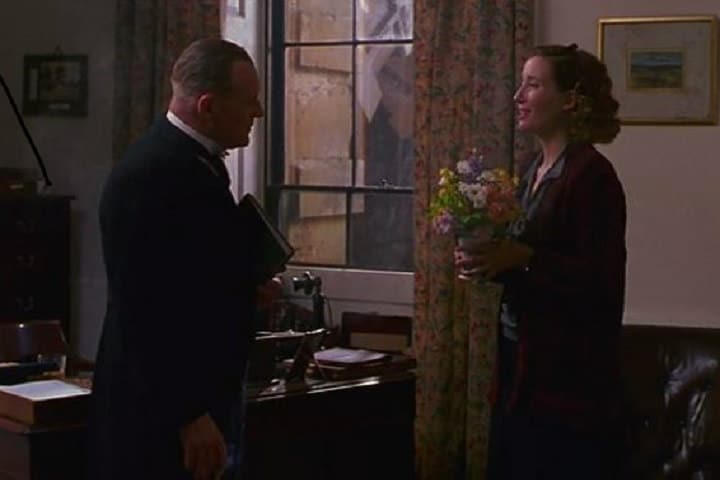 Classic Review: The Remains of the Day

The Remains of the Day is a historical drama based on the award-winning novel by Kazuo Ishiguro; a staid masterpiece full of quiet regret. In all, a subtle film with a great cast and an unusual story.

Mr. Stevens has been Butler at Darlington Hall for many years. Under the suggestion of his new employer, he decides to take a holiday and visit an old friend. The friend is Miss Kenton (now Mrs. Benn) who was once Housekeeper at Darlington. As he travels to meet her he looks back over his time at Darlington. And as he does, it becomes clear that he may have missed out on a chance at happiness in his pursuit of excellence.

I should probably say up front that this is by no means a happy film. This is a film about regret; mistakes made and realized too late. If you can enjoy tragedy then you may appreciate Remains of the Day. If you prefer films that are happier or at least have a satisfying conclusion then you probably will not like it.

The acting talent in The Remains of the Day is stellar. Anthony Hopkins gives an understated and quietly heart-breaking performance as Stevens, a man who has given his life to service at the cost of allowing himself to feel basic human emotion. Emma Thompson, on the other hand, is intelligent and endlessly watchable as Miss Kenton, bringing some much-needed humor to the film. Christopher Reeve is also sympathetic as the American Billionaire who saves Darlington Hall from being demolished. This film also stars an extremely young Hugh Grant and Lena Headey in small supporting roles. Both are excellent.

There is a quiet almost-romance between Stevens and Miss Kenton which never really had a chance. It is heartwarming at times, yet incredibly frustrating at others. I was reminded of the subtle fondness between Mr. Carson and Mrs. Hughes of Downton Abbey. So much so, that I wonder if their relationship was not at least a little inspired by The Remains of the Day.

I can see why The Remains of the Day is highly-praised (I couldn’t find a single bad review), however, I personally didn’t love it. The story moves at a very slow pace and can certainly be a little boring at times. I found the actions of the main character to be frustrating and entirely alien. This is a personal issue I had with it though. While it prevented me from being moved beyond a certain point by the tragedy, I can still appreciate how others might see it. I can also see that the film succeeds well at what it intended to do and tells its story capably.

If you enjoy a well-written, introspective story that is more about character than plot, with tragic leanings, then I suggest you try The Remains of the Day.

Where to Watch: The Remains of the Day is available to stream on Netflix, Amazon Video and is on DVD.