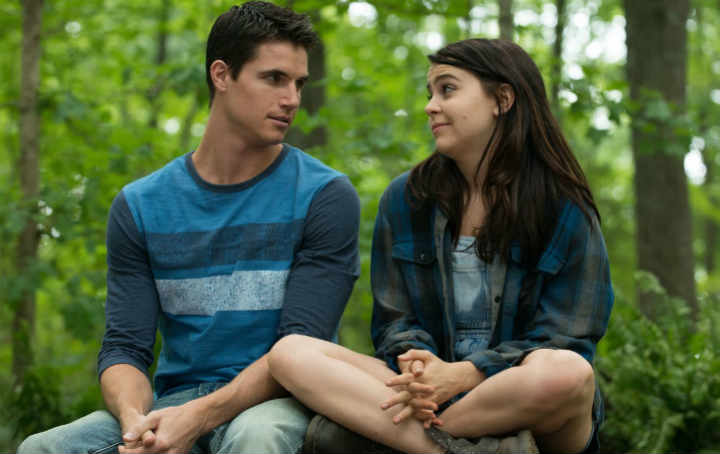 Some movies are intriguing just because of their title. 2015’s The Duff was a movie that intrigued me for a while before I finally saw it for just that reason. Honestly, I was a little surprised that I enjoyed it so much. Starring Mae Whitman as Bianca Piper and Robbie Amell as Wesley Rush, The Duff takes the stereotypes from teen movies and turns them on their heads.

RELATED Romantic Moment of the Week: The DUFF’s Wesley and Bianca 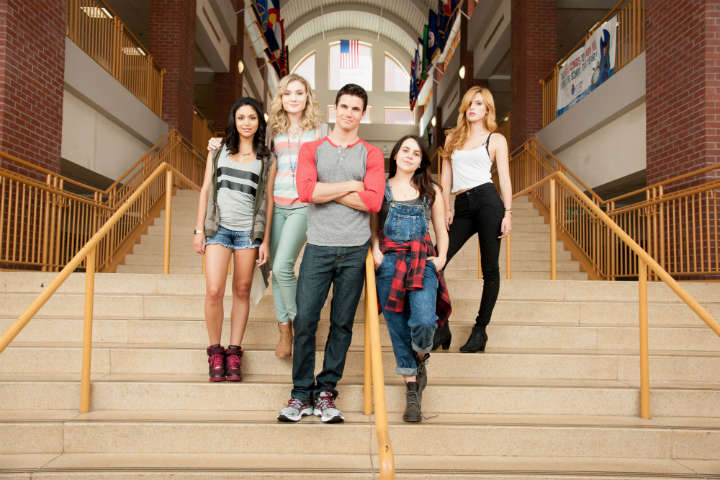 Based on the book by Kody Keplinger, The Duff is told by Bianca Piper and is her reflecting on her senior year of high school for an article she is writing. At the beginning of the movie, Bianca and her two best friends, Jess and Casey, are happy in their lives. Although the rest of the school knows that Jess and Casey are more attractive than their friend, the three always have each other’s backs. All Bianca wants to do is avoid the homecoming dance, watch Vincent Price movies, and work up the courage to talk to her crush, Toby Tucker.

Bianca’s neighbor and childhood friend, Wesley Rush, is captain of the football team. 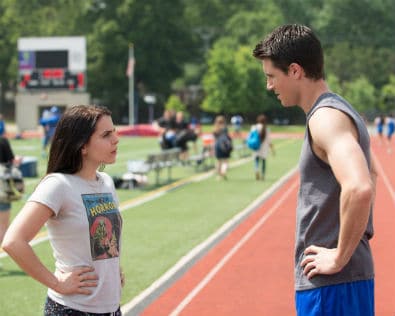 Despite her apparent dislike for him, he is always showing up to ask her about Jess and Casey or make fun of her movie choices. At a party, he mentions to Bianca that she is the Duff, the Designated Ugly Fat Friend. This new information throws Bianca into a tailspin, making her question her friendships.

After fighting with Jess and Casey, Bianca looks for a complete makeover. She asks Wesley for help to de-duff, in exchange, she will help him pass science. This means that The Duff includes a makeover scene, which is hilarious and awkward.

As she and Wesley grow closer, Bianca finds herself in some unexpected situations. Wesley’s on-again-off-again girlfriend, mean girl Madison Morgan, is jealous of their friendship, wreaking havoc in Bianca’s life. This includes some awful YouTube videos and passive-aggressive comments. Will Bianca, Jess, and Casey ever reconcile? What is Madison’s deal? Can Bianca ever talk to Toby Tucker? Will she win him over, and does she even want to? What does Wesley want in life? And will Bianca and Wesley ever see the truth that is right in front of their faces? These questions will be answered in The Duff! 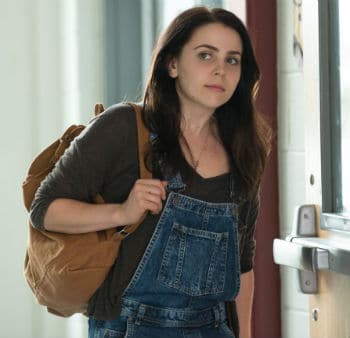 The biggest problem with movies like The Duff is that the Designated Ugly Fat Friend is often never actually any of those things. In this movie, they clear that up by having Wesley explain to Bianca that The Duff doesn’t actually have to be ugly or fat, it’s just the person in the group that is less conventionally attractive or the one that is more approachable. I also appreciated how offended Wesley was when Bianca got mad at him for calling her fat and ugly, pointing out to the audience that the Duff can be pretty. For me, that clears up that problem and makes the movie less problematic. It also helps sets up Wesley and Bianca’s relationship.

Bianca is a fun character. She’s smart, awkward, and hilarious. Although she learns that it’s important to dress nicely, her character doesn’t really change throughout the movie. Her world is rocked and she goes through some hard times, but she is always Bianca. She just learns to be more comfortable with who she is and with letting people see that.  Mae Whitman is hilarious in the role, and many of Bianca’s lines are surprisingly funny.

Wesley Rush starts out the film as a bit of a dumb jock, but as the film goes on the 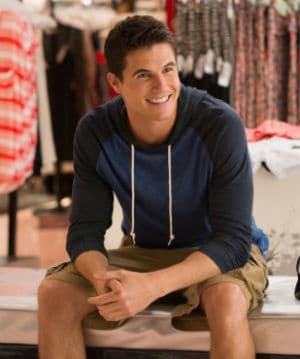 audience sees that he is actually a nice guy. Robbie Amell plays him with just the right amount of charm to make Wesley a character that the audience likes, even though at times I wanted to smack him. In the end, he turns out to be a sweet guy with some great advice. He seems to grow and change the most throughout the film, but that might be just because Bianca is telling the story. As she sees who Wesley really is, so do we.

I love stories where two old friends realize that they are in love and The Duff did not disappoint. Wesley and Bianca started out as friends and then drifted apart. As the film goes on, they get closer, trusting each other with their secrets. Mae Whitman and Robbie Amell also have a lot of chemistry and play off each other well. Since it’s a teen comedy, there will have to be misunderstandings and conflict between the two characters, but there is also a high chance that they will get their happily ever after. Like with other films that have this type of romance, it was a lot of fun to watch the two of them realize how they felt about each other.

The main antagonist of The Duff, Madison Morgan, is obsessed with her image. She is always on social media and recording the events around her. This is something that gets Bianca in trouble and gives the film a nice excuse to talk about cyber-bullying. Since this is an issue that affects a lot of teens today, this was a realistic thing to include in a teen comedy. I thought that the social media aspect of the film made it more realistic and helped the story move along. 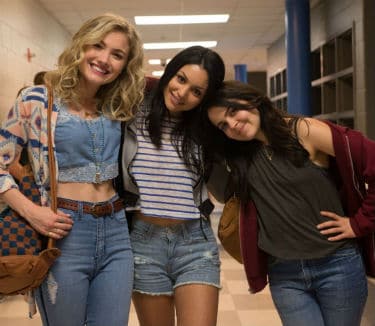 The friendship between Jess, Casey, and Bianca is portrayed like a real friendship between three people who have been friends for years. Even when they’re fighting, Jess and Casey have Bianca’s back, and the fight clearly hurts all three of them. This makes the film’s climax all the sweeter. Jess and Casey are both given distinctive personalities, so they don’t feel like cookie-cutter characters.

The other supporting characters include Bianca’s teacher Mr. Arthur, her mother Dottie Piper, and Bianca’s crush Toby Tucker. Toby Tucker is a musician with fun hair and is the object of Bianca’s affection. Played with the perfect amount of charm by Nick Eversman, Toby is a wonderful character. Mr. Arthur is an eccentric teacher played by Ken Jeong, and he acts as Bianca’s mentor. Finally, Allison Janney plays Bianca’s mother Dottie, an out-of-touch divorcee who is also a bestselling author. These supporting characters are hilarious, without overwhelming the lead.

In the end, The Duff reminds us of a few things. There is nothing wrong with being 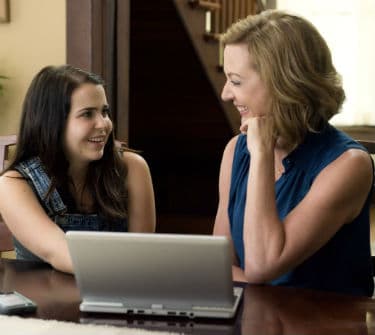 a DUFF. No matter who you are, there is always someone prettier or more talented, but that doesn’t define you. Everyone has their own strengths and weaknesses, their own strange quirks. What is important is that we are all able to take those quirks and embrace them. Also, you are the person who defines who you are. No one can label you unless you let them. Finally, sometimes love is in the place we least expect it, like with the obnoxious boy next door.

The Duff is like a cross between Mean Girls and Easy A; the characters are fun and the story is compelling. Although at times the characters can be a little awkward and the humor can be a little crude, the overall message is sweet. With a fun soundtrack and great performances, if you enjoyed Mean Girls, Easy A, or She’s the Man, you may enjoy The Duff.

Content Note: This film is rated PG-13, and for good reason. There are quite a few serious swear words, some subtle and not-so-subtle innuendos, some crude humor, and some teenage partying.

Our romance-themed entertainment site is on a mission to help you find the best period dramas, romance movies, TV shows, and books. Other topics include Jane Austen, Classic Hollywood, TV Couples, Fairy Tales, Romantic Living, Romanticism, and more. We’re damsels not in distress fighting for the all-new optimistic Romantic Revolution. Join us and subscribe. For more information, see our About, Old-Fashioned Romance 101, Modern Romanticism 101, and Romantic Living 101.
Pin this article to read later! And make sure to follow us on Pinterest.
By Bailey Cavender on May 19th, 2017