A Writer, A Fan & A Ghostwriter Make for a Great Story in Chicago Typewriter 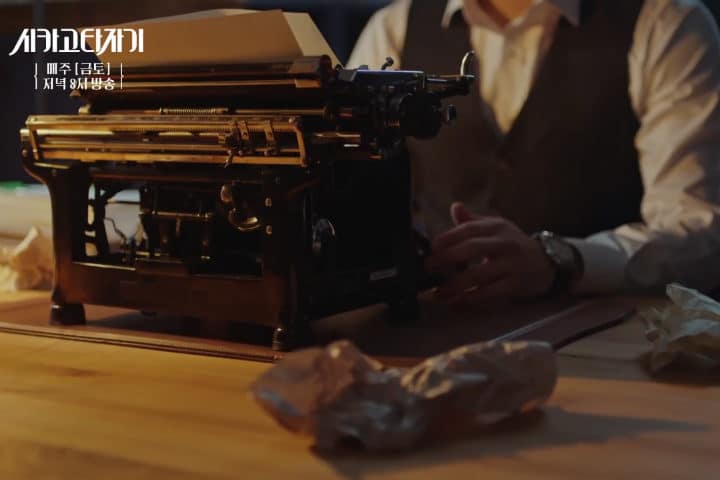 Chicago Typewriter is a drama that pulls one in from the very first scene and has one pulling one’s hair out an entire week in anticipation of the next episode. Only 8 of the 16 episodes have been aired, but the drama is still as exciting as ever. Perhaps even more exciting than it was at the start. I can only anticipate that the ending will be as good as the beginning. But I have high hopes!

A Writer as the Central Character

There is something about stories surrounding writers and the writing craft that always fascinates and excites me. They are like a well that never dries out. As though no matter how often one used it, there is always more at the bottom. Such stories just feel so raw and real. Perhaps this is because the screenwriters get to write about something they truly understand. So it gives those films and dramas an additional element of realism?

Straight away, we are introduced to Han Se-joo, a very successful writer at the height of his career. He is so popular that his name has become a brand in and of itself. He is compared to the likes of Stephen King (with plenty of references to Misery). The popularity and money it brings with it allow him to be as eccentric as he likes. After all, the best characters that write are the thoroughly eccentric ones. On top of everything else, he is also a fan of quote-dropping (something I can definitely relate to) and prides himself on a very strict work schedule. He attributes a lot of his success to his regime and is very vocal about not believing in such phantom ailments as writer’s block.

Which is why writer’s block is exactly what he experiences soon after we meet him sitting astride his figurative high horse. Simply watching his worldview fall apart and struggle to pull himself back together again is enough for me to enjoy this drama for its psychological and humorous intensity, but there is so much more to it.

As with most K-dramas, we have drama, humour, romance, tragedy, action, mystery, and any other genre you can think of mixed in the magical K-drama cauldron to make an exquisitely flavoured concoction. This is why we are drawn to them again and again despite the obvious language (and culture) barrier. However, these barriers are very quick to come crashing down after only a couple of dramas, until Dramaland becomes as comfortable as a hot drink and a warm blanket on a cold winter’s day.

In this particular drama, we even have supernatural elements mixed in with the rest. There is an underlying theme of reincarnation throughout the story line as we follow two lifetimes. In the modern lifetime, we follow our successful writer who has cut himself off from human contact almost entirely due to his mistrust of people. In the past lifetime, we follow his previous reincarnation where he also happened to be a writer. The difference being that in 1930’s Korea he was a struggling writer, who was bound by the rules of the time he lived in, rather than the success he is today.

The 1930’s was a difficult time for Korea and its people who were under the thumb of the Japanese Empire. It was a time of rebellion and struggle. But at least he wasn’t alone back then. In the 1930’s he had two people in his small circle that brought him laughter and inspiration on a daily basis. 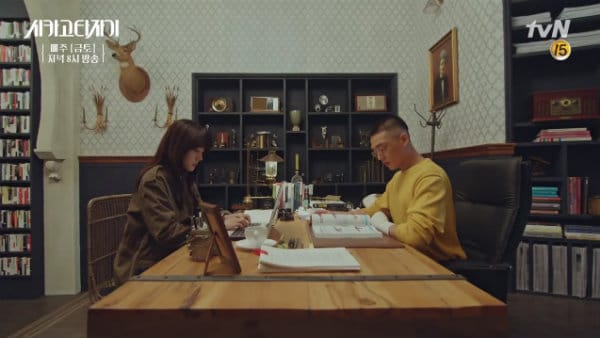 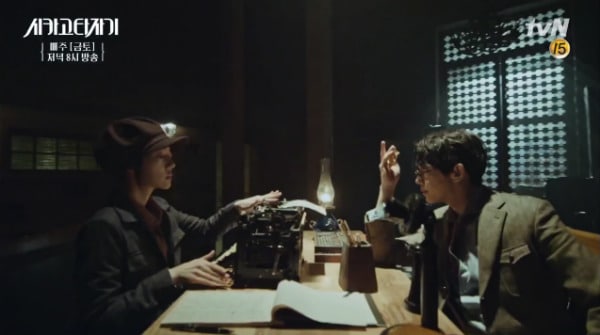 These are people he appears to be destined to meet again because something seems to have gone wrong in the past: At least one of the trio appears to have been killed and there is a lot of mystery surrounding this event.

Or Maybe the Typewriter is the Central Character? 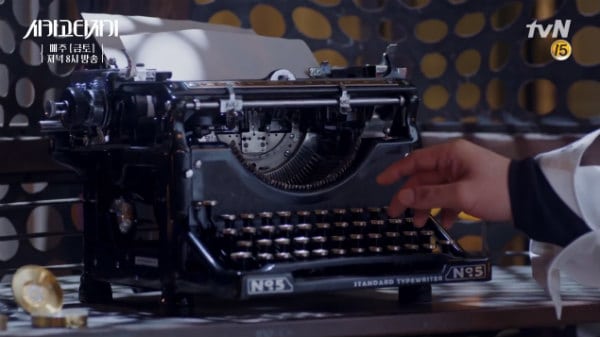 The wheels of this story start turning when Han Se-joo stumbles upon a typewriter with Hangul keys on his trip to Chicago. He is inexplicably drawn to this typewriter to the point where it even seems to be calling out to him. As if on cue, both of the friends from his past suddenly appear in his current life. While he tries to escape them, he also seems to want to seek them out despite himself. It is possible that this contradictory state plays a part in his descent into madness. That is, of course, not to mention all the other reasons. At least he thinks it’s madness because surely the flashbacks he is seeing come from his imagination as a writer. They couldn’t possibly be real, or could they?

The Wonderful Cast of Chicago Typewriter

Left to right: The Writer, The Fan, The Ghostwriter

The cast is excellent! Not only are the actors very good as we have seen them in other big projects before. They are also perfectly suited to the characters they play, which isn’t always the case. Yoo Ah-in (Sungkyunkwan Scandal) plays the main writer Han Se-joo, while Im Soo-jung (I’m Sorry I Love You, I’m a Cyborg but That’s OK) plays his fan and love interest and Go Kyung-pyo (Reply 1988, Jealousy Incarnate) rounds out the main trio as the mysterious albeit uninvited ghostwriter.

I am really enjoying the latest K-drama tendency of suddenly blaring classic songs for great comedic effect when one least expects it. Scenes like the one where Do Bong Soon, the bodyguard, effortlessly carries off her swooning male charge in her arms to the tune of Whitney Houston’s I Will Always Love You in Strong Woman Do Bong Soon.

Check out this scene from Chicago Typewriter with what must be the greatest use of The Platters’ Only You (And You Alone). As we all know, there have been oh so many uses of this song anywhere and everywhere. It feels like I’ve heard it in so many films and shows to the point of it being overused. However, the song is a perfect fit here. I wouldn’t be surprised if they called the character Yoo Jin-oh just so that they could make this song (and the painting of course) work in their favour.

Why You Should Watch Chicago Typewriter

Chicago Typewriter is a true feast for those who like to theorize about the plot and the significance of events, characters, and carefully placed props. Pay close attention to the paintings, the artwork (such as Salvador Dali’s clocks), and the literary and cinematic references. There are so many wonderful references, many of which I probably haven’t even noticed myself! I’ve decided not to go into too much detail about events and characters because each scene is a further revelation unto itself and is much more fun to discover on one’s own.

I have not mentioned the romantic element, but the romance is just too good to give anything away. It’s definitely there and in large quantities, swinging like a pendulum from side-splittingly funny to bewildering and back again. Let’s just say that Han Se-joo has a tendency to dig his own grave with his words and actions. Of course, this puts him in some very sticky and awkward situations with the heroine of the story, much to our amusement. At the half-way mark, I still have no clue as to what the ending will be like. And that is an excellent sign!

Content Note: Viki rates it as PG-13. It’s very mild, but there may be some violence still to come in the 1930’s story in particular. They are in the middle of a rebellion there, after all.

Where to Watch Chicago Typewriter: Head on over to Viki to watch this exciting new drama. Even though only 8 episodes are available so far, I would carve out a nice chunk of time for when you decide to try this one out. This is because you are very likely to end up being unable to stop yourself from carrying on to the next episode, and the next, and the next …

Have you already sunk your teeth into Chicago Typewriter? What did you think of it? Are you as excited at the way the events are unfolding as I am? Let me know below!

13shares
We use cookies to ensure that we give you the best experience on our website. If you continue to use this site we will assume that you are happy with it.OkNoPrivacy policy