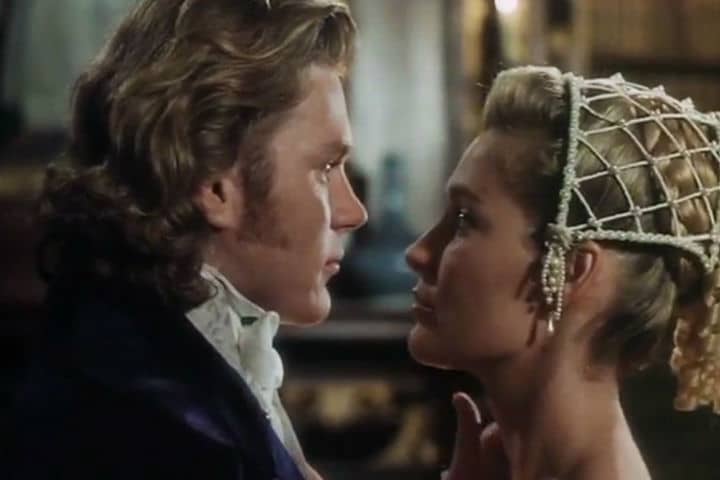 A Duel of Hearts Review

A Duel of Hearts is the fourth and final of Barbara Cartland’s regency romance novel adaptations. When I first saw this movie in the late 1980’s, I absolutely fell in love with it. I remember watching every repeat the TV Guide had scheduled and anticipating the viewing with epic giddiness. Like Helena Bonham Carter’s A Hazard of Hearts, this gigantic Cartland candy-cane is one of my absolute favourites!

Lady Caroline Faye (Alison Doody) is the toast of the London ton. Beautiful, wealthy and of marriageable age, she is admired by gentlemen, rakes and libertines alike. To that end, when the impudent rogue Lord Reversby tricks her into spending time alone with him, she discovers his plan to ruin her reputation in order to force her hand in marriage. Caroline manages to escape into the forest and instead encounters the (regency rockstar) handsome Lord Vane Brecon (Benedict Taylor) under very dubious circumstances. Lying about her identity to protect her reputation, Caroline and Vane must hide from the authorities or be framed for a murder they both did not commit.

Thank you and goodbye. It’s been a thrilling adventure.

And so, after spending a frantic afternoon together, they part ways with Vane none the wiser that he had spent the afternoon with a highborn lady, both certain their paths will never cross again.

We Shall Not Meet Again 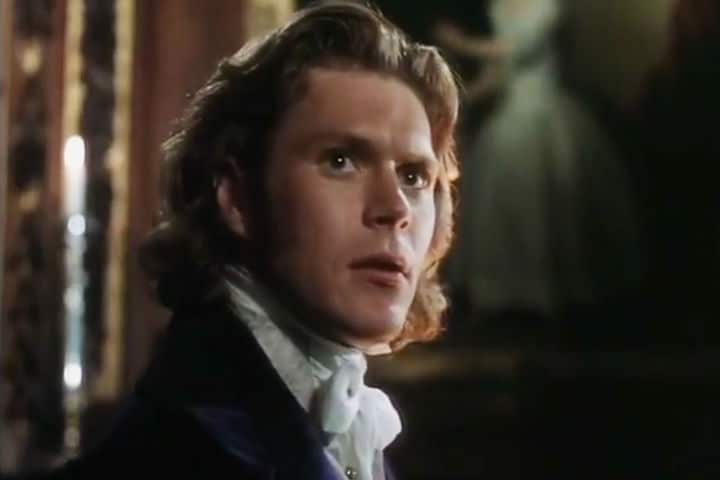 Unable to forget Lord Brecon, however, Caroline later learns that he has been accused of murder. Knowing he is innocent, she cannot reveal how she knows because she would have to admit to their unchaperoned, although rather thrilling, adventure in the forest.

Somebody implicated Vane Breckon in a murder. I want to try and help him.

Determined to prove him innocent, Caroline visits an old school friend and with Harriet’s help, poses as a commoner. In so doing, she is able to secure a position at Brecon castle as Lady Brecon’s paid companion.

I’ve Been Thinking About You

While Vane cannot withhold his pleasure at seeing her again, he strongly urges her to leave his estate. Well now, not when you’re looking at her like that Milord. And certainly not when she’s looking back! With his approval or not, Caroline embarks on her mission to clear his name. “I intend to shake up this house until it gives me all its mysteries,” she vows. Unfortunately, the more Caroline scratches beneath the surface of Brecon Castle, the more she uncovers dangerous family secrets – some Vane is purposefully keeping from her and others they shockingly discover together.

In A Duel of Hearts, Benedict Taylor rivals any Austen hero. He is dashing, broody, intense and tortured by family secrets. In addition, with flowing golden locks, he has an aura of a refined rogue – aware of the rules but skirting the edges of them nonetheless. He’s dashing, debonair and has just a little bit of a regency rockstar vibe going on. I declare there ought to be a thing called The Brecon Effect™. It’s real. He could work on not contradicting himself so much though. For example: “Will you stay? But I ought to let you go!” Or “I love you with all my heart and soul! But there is no future for us.” Figure it out Vane darling. You’re giving Caroline whiplash.

RELATED: A Ghost in Monte Carlo (1990) Review – Romance Blossoms Along the French Riviera

Alison Doody is wonderful as Lady Caroline Faye aka Miss Caroline Fry. She is mature – both in looks and demeanor – a departure from the Cartland leading ladies who came before her. Caroline is bold and adventurous, determined and unafraid to work at what she wants – and she wants Vane. Go, Caroline! 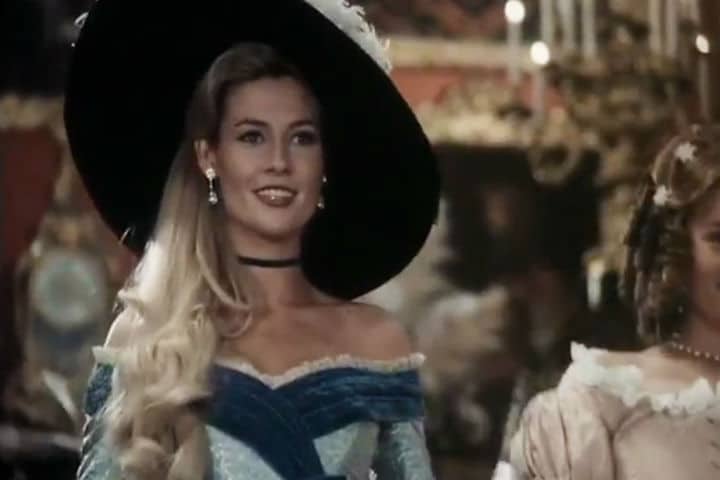 Michael York returns for his second Cartland appearance, this time in an expanded role as the necessary creeper – every romance needs one. He excels as Brecon’s wastrel of a cousin, Gervaise Warlingham. In addition, Jolyon Baker, Geraldine Chaplin and Billie Whitelaw (Grace Poole in the 1996 version of Jane Eyre) also star.

I am constantly surprised by the quality of the production values of all the Cartland adaptations. The costuming, in particular, is really beautiful and holds up better than many modern period dramas with larger budgets. I particularly love how the romance is turned up a notch as Vane and Caroline flirt up a storm. When Vane’s grandmother picks up on it and she’s both a low-key alcoholic and cannot see very well, you know the flirting game is strong.

And what do you two young people find so riveting? Oh! Flirting are we? Paddling palms?

A Duel of Hearts has all the tropes you would expect from Cartland – duels, daring escapes, murder and in this case, not so subtle flirting between the leads. The story also borrows a little from Jane Eyre, making it familiar but no less enjoyable.

Overall A Duel of Hearts is enchanting. It’s a veritable volcano of sucrose, but I promise it won’t give you a toothache.

Where to Watch: A Duel of Hearts is available for sale on Amazon and can also be streamed on YouTube.

Content Note: This film is unrated but is generally safe for family viewing.

Have you watched A Duel of Hearts, read the novel or seen any of her other film adaptations? If you have, what did you think? Comment below and let me know!

Our romance-themed entertainment site is on a mission to help you find the best period dramas, romance movies, TV shows, and books. Other topics include Jane Austen, Classic Hollywood, TV Couples, Fairy Tales, Romantic Living, Romanticism, and more. We’re damsels not in distress fighting for the all-new optimistic Romantic Revolution. Join us and subscribe. For more information, see our About, Old-Fashioned Romance 101, Modern Romanticism 101, and Romantic Living 101.
Pin this article to read later! And make sure to follow us on Pinterest.
By Naazneen Samsodien on May 11th, 2017