The hunt for the truth continues! The X-Files is set to return with 10 brand new episodes for the 2017-2018 television season! Like any good XPhile, I immediately did a happy dance. Mulder and Scully are back! Then, as is the natural course of events, I began a re-watch. That is, a selective re-watch of favorite episodes featuring classic Mulder and Scully moments. Mulder and Scully’s relationship is, without doubt, one of the classic romances of all time. What started as a reluctant partnership evolved into a complex relationship that defies explanation. Every glance, touch, and word was filled with subtleties that spoke to their deeply rooted connection. Their bond has been tested time and time again and found to be unbreakable.

15 Out of this World Classic Mulder and Scully Moments

(In Chronological Order of Episodes) 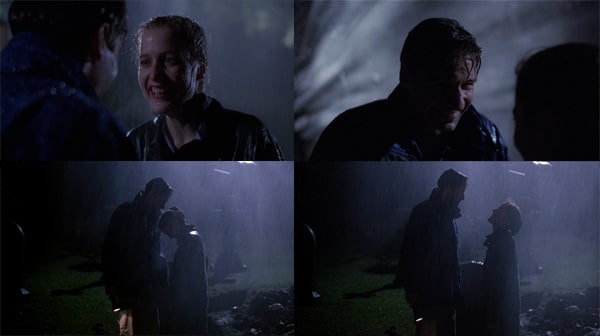 From the beginning, Mulder and Scully challenged each other to think outside their comfort zones. The pilot not only introduced the mythology of The X-Files but also the Mulder and Scully dynamic. This pilot gave us those classic Mulder and Scully moments we would see repeatedly over the years.  Throughout the episode, Mulder and Scully debate fact and fiction, science and science fiction. At last, Scully’s science meets Mulder’s theory in the middle. Scully is as surprised as Mulder and they begin laughing. There’s a new understanding between them. Mulder will always push and prod Scully to think outside of conventional science. Scully will always counter with facts and logic. However, when facts and logic support Mulder’s theories, she will not deny them. This was the beginning. This is where trust began. 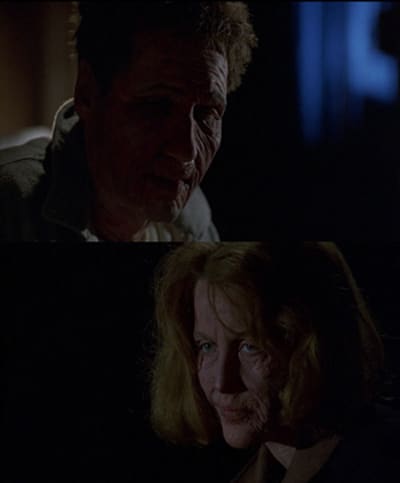 Yes, the creepy episode in which Mulder and Scully appear to age due to salinization (no, Mulder, not a wrinkle in time). I’m sure you are wondering how this episode could have a classic Mulder and Scully moment. Yet, it does. Underneath the scary, wrinkly skin, Mulder and Scully remain true to who they are.  Cut off from the only potable water on the ship, Scully goes on a mission to find something, anything, to keep Mulder alive. The result? A delightful concoction of sardine juice, lemons, and water from a snow globe. They argue like an old married couple (haha!) over who should drink it. Unfortunately, the ship lurches and the jar slides off the table, crashing to the floor. It’s classic Mulder and Scully. Each stubborn and willing to sacrifice their life to ensure the other’s survival. 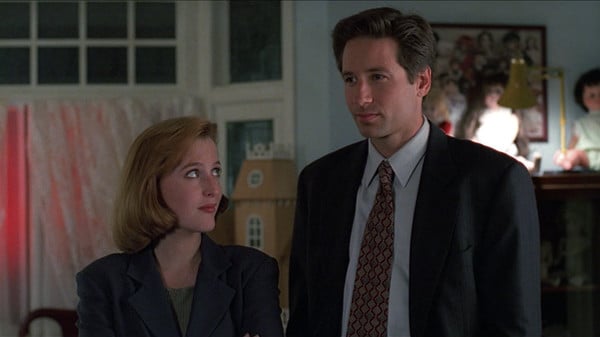 Some of the most classic Mulder and Scully moments involve them poking fun at each other. When a psychic is brought in to consult on a case, you would think Mulder would be in seventh heaven. Instead, in an interesting twist, Mulder is as skeptical as Scully. As renowned psychic Mr. Yappi gives a dramatic performance, both Mulder and Scully have dubious looks on their faces. When Mr. Yappi picks up “negative energy” in the room, he identifies Mulder as the culprit. Consequently, Mulder is asked to leave.

“I can’t take you anywhere,” Scully teases as Mulder sighs deeply at his fate. A seriously cute moment of teasing in one of the best episodes of The X-Files. 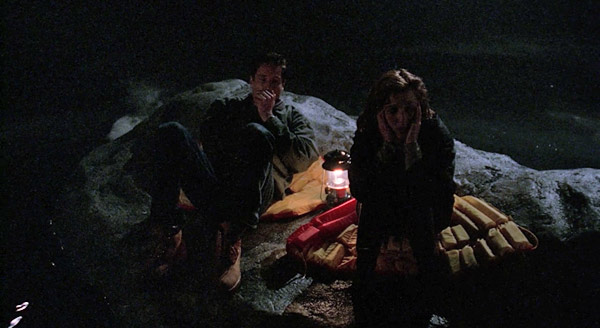 Quagmire is an episode that is easily forgotten. Yet, it features one of the most character-focused scenes in Season 4. The tension between Mulder and Scully is thick. Once again, Mulder dragged Scully into the field without any real explanation. Turns out, he’s chasing a version of the Loch Ness Monster. As a result, Scully is more vocal in her doubts than usual. When a boating mishap forces them to take refuge on a rock in the middle of a lake, the two are forced to talk. Scully compares Mulder to Ahab from Moby Dick. She calls his search for the truth his white whale. Mulder’s response is typical Mulder only it’s not. He rightfully points out he’s actually the antithesis of Ahab. This is one of those classic Mulder and Scully moments that show their bond is always strong even when they are at odds. Also, R.I.P. QueeQueg. 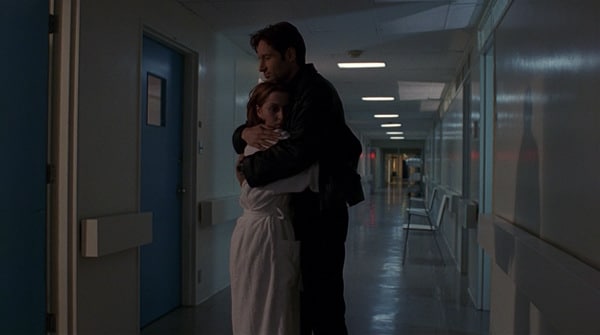 One of the most heartbreaking episodes, “Memento Mori,” follows Scully on her quest for answers to her cancer. Many classic Mulder and Scully moments were much like this one; intimate and reflective. Faced with the knowledge that someone was responsible for her cancer, Scully is determined to fight. Mulder matches her determination. There is a look shared between them before Mulder pulls Scully into his arms. He whispers to her that the truth will set her free and Scully holds him tighter. At last (too soon!) they break apart, but then Mulder presses his lips to Scully’s head. These two perfected the art of the forehead kiss!

Related Post – Romantic Moment of the Week: A Romantic Mystery Solved as Scully Fights to Save Mulder

Bonus: How vulnerable did Mulder sound when he said to Scully, “You weren’t in your room. I was scared.” 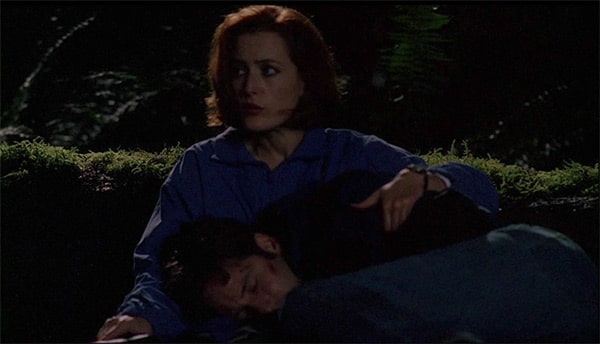 Of course, there are classic Mulder and Scully moments in which one of them is injured. Some are serious, some are humorous. In this one, we see another side to Mulder. Who knew that an injured Mulder was a cute and cuddly Mulder! The two are lost in the wilderness without food or water. Scully clearly wasn’t a Girl Scout as she fails repeatedly to start a fire to keep them warm. What other option is there? That’s right….snuggle up Mulder and Scully! It’s another one of those character moments where Mulder and Scully are able to banter yet be serious at the same time. In the end, Scully pulls Mulder close, insisting he sleeps while she keeps watch. Mulder tells her to sing so he knows she’s awake and a reluctant Scully does so. A tuneless version of Three Dog Night’s Joy to the World never sounded so sweet! 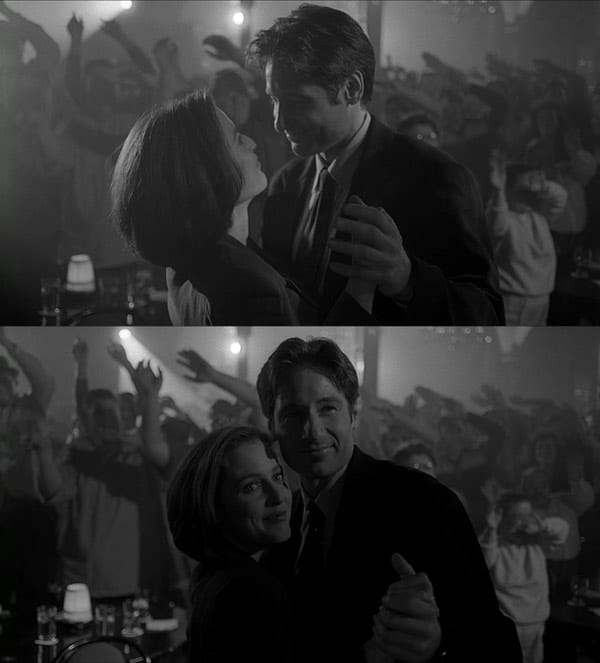 A monster-of-the-week favorite! There are so many classic Mulder and Scully moments in this episode. Yet, the one that always pops to mind, is the dance. Mulder is not without charm and he’s used it on Scully before to varying degrees of success. When Mulder holds his hand out to Scully for a dance, she was as surprised as the rest of us. Mulder? Dancing? Yes, indeed! He pulls Scully to her feet and into his arms, bringing her in close. All the while, he’s smiling at her and, dare I say it?? Gazing at her. It’s a swoon-worthy, romantic moment for Mulder and Scully and one I watch repeatedly. 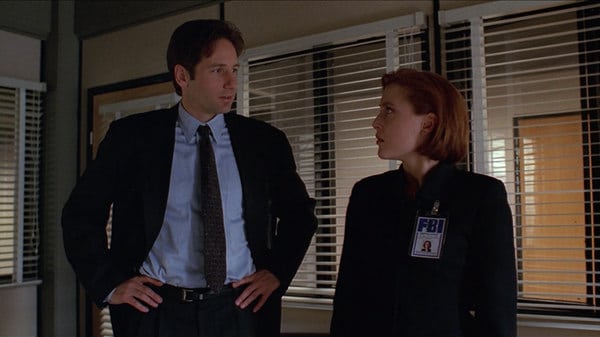 The entire episode is chock full of classic Mulder and Scully moments. It’s a hilarious adventure as they take turns reciting their version of events. The two of them delightfully mock the other with exaggerations of the others’ quirks. It’s an incredible insight into how Mulder and Scully view themselves and each other. Watching Gillian Anderson and David Duchovny perform over-the-top versions of their characters was uproariously funny. From a whining Scully to a Shaft-singing Mulder, “Bad Blood,” is one of the best episodes of the entire series!

Continue on to the next page for more classic Mulder and Scully moments!!