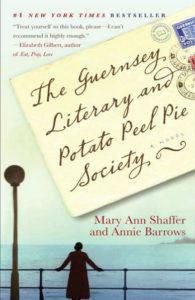 Letters and Love: A Review of The Guernsey Literary and Potato Peel Pie Society

A letter from a stranger changes the course of a woman’s life – that is pretty much The Guernsey Literary and Potato Peel Pie Society, Mary Ann Shaffer’s and Annie Barrows’ bestselling book from 2008, in a nutshell. That one unsolicited letter leads to a journey of discovery, a journey into the power of books and reading and writing, into survival and friendship and love and loss, into life and its many, many stories.

A War-Wearied Journalist in Post-WWII Britain

Juliet Ashton, a war-wearied journalist in 1946 England, tours the country on a book tour with her collection of lighthearted, upbeat essays written during the war. She’s looking for a new writing project, something more substantial and serious than what she’s been writing of late.

She receives an unexpected letter from an unknown man one day, a man who now owns a book that once belonged to her (her name and address written in the book). The man, Dawsey Adams, has a request. He lives on the Channel Island of Guernsey, where there are no longer any bookstores since the island was completely cut off from Great Britain for 5 years during the war and under German occupation, and he would like help finding contact information to a reputable bookstore in London.

Juliet’s curiosity is piqued. A correspondence develops, not just with the down-to-earth pig farmer/carpenter Dawsey, but with others on the island. She learns of the Guernsey Literary and Potato Peel Pie Society, a book club formed initially quite by happenstance and quick thinking by its feisty “founder” Elizabeth during the wartime occupation. Juliet learns of the club’s members, receiving many letters with their unfolding stories, some rather tragic. Inspired and impressed by these letters from her pen pals, Juliet travels to Guernsey to more fully investigate, with hopes of writing a book.

The Guernsey Literary and Potato Peel Pie Society is an epistolary novel, comprised entirely of correspondence – letters, telegrams, notes, diary entries. This is a form that is not used so much in our day. So it has the potential initially to be a wee bit off-putting and confusing to the reader. But that feeling quickly subsided (for me at least), as I became enveloped (pun intended) in the rather voyeuristic pleasure of reading others’ papers. I had to deduce and read between the lines and help put these letters and their stories together.

It is a very satisfying reading experience. It is also very informative; you learn a lot about the harsh living conditions during the occupation and the terrible fates of dissidents. I feel much smarter on the whole subject of the German occupation of the Channel Islands now.

And did I mention that there is a very satisfying, slow-burn romance building throughout the book? Our vivacious journalist has more than a few exciting men in her life, but there is something to be said for a steady pig farmer/carpenter with a love of Charles Lamb.

The book is written as a collaboration between Mary Ann Shaffer and Annie Barrows. And the story of how that collaboration came to be is itself rather heart-wrenching and life-affirming. Mary Ann Shaffer was a storyteller, a woman who loved reading, who loved telling stories and who started more than a few writing projects, never to finish. This book was the first and the last she ever completed.

Upon finding a publisher, she got sick, too sick to deal with the substantial revisions and rewriting. She enlisted her niece, Annie Barrows, herself a writer, to take upon the work. It being her beloved aunt’s dying wish, she did. Mary Ann Shaffer never read the published manuscript, never held the book in her hands, she died before it all came to be.

What emerges from this tragic tale is something so life-affirming. This affirmation that stories, the power of stories, live on even after the creator is long gone. Annie Barrows was able to pick up the unfinished threads of her aunt’s work and weave it all lovingly together. That love shines through in this work, echoing one of the main themes of this book: to pick up and carry on and find the daily joys despite life’s many injustices, deprivations, disappointments and sorrows.

“I hope that my book will illuminate my belief that love of art – be it poetry, storytelling, painting, sculpture, or music – enables people to transcend any barrier man has yet devised.” – Mary Ann Shaffer

A film adaptation of the book is apparently set to start production this year with the release next year. Reports are that Lily James, Jessica Brown Findley, Matthew Goode, Michiel Huisman and Glen Powell are starring. I look forward to viewing the results.

Content Note: There is no graphic content in the book. Although there are descriptions of deprivations under the Nazi occupation and an account from a concentration camp. There is no swearing.

When’s the last time you wrote a letter? Who in your life needs a declaration – on paper and in writing – of adoration and admiration?

4 thoughts on “The Guernsey Literary and Potato Peel Pie Society (2008): An Informative and Romantic Epistle”