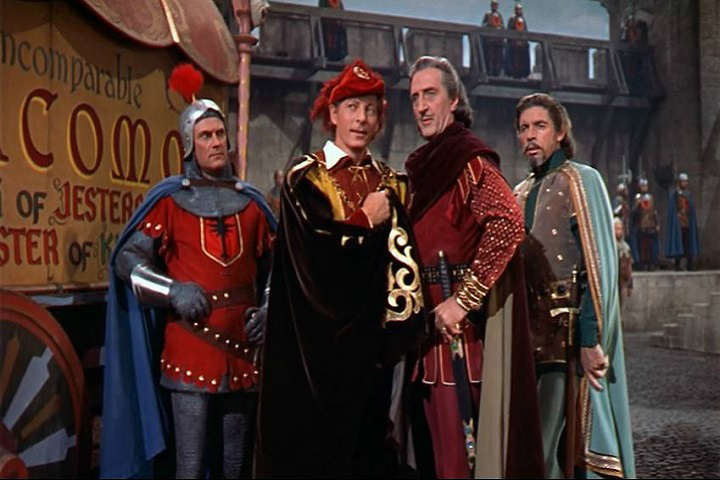 The Court Jester is a musical parody of popular old swashbuckling films starring the likes of Errol Flynn. It is a good-natured comedy that takes full advantage of the trappings of the genre. There are dashing swordfights, romantic trysts, and devious plots. The whole thing is played tongue-in-cheek, however, for maximum comedy. An enjoyable and funny movie.

King Roderick has usurped the throne of England, killing the entire royal family, save one. The baby prince survived and was smuggled away by loyalists. Hubert Hawkins is an ordinary man following The Black Fox, an outlaw hero fighting to return the true heir to power. Hubert and Captain Jean are instructed to bring the baby safely to an Abbey where he can be protected. On the way, they run into Giacomo, a Jester who is traveling to serve King Roderick. Seizing the opportunity to place a spy in the King’s court, Jean knocks him out and convinces Hawkins to impersonate him. 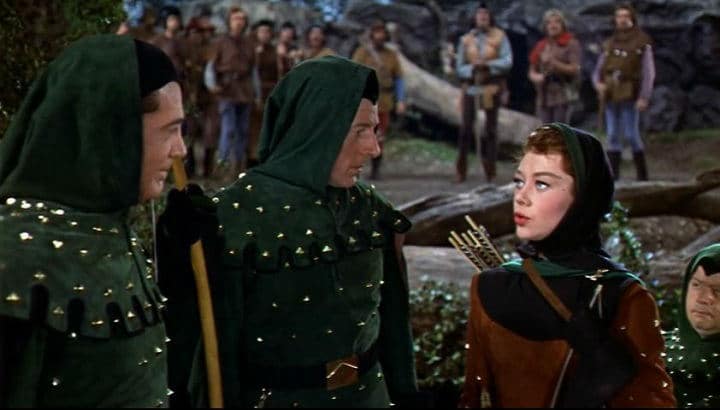 The film is very funny. This is largely due to the writing and the performance of the stars. Danny Kaye is the talented center of the film and carries it well.  His performance is versatile and full of heart. The Court Jester also stars Glynis Jones and Angela Lansbury who are much younger than we are used to seeing them. Both women are excellent in their roles with excellent comedic timing. There is a lot of comedy in this film. There is wordplay, slapstick, farce and much more. So there is something for everyone. 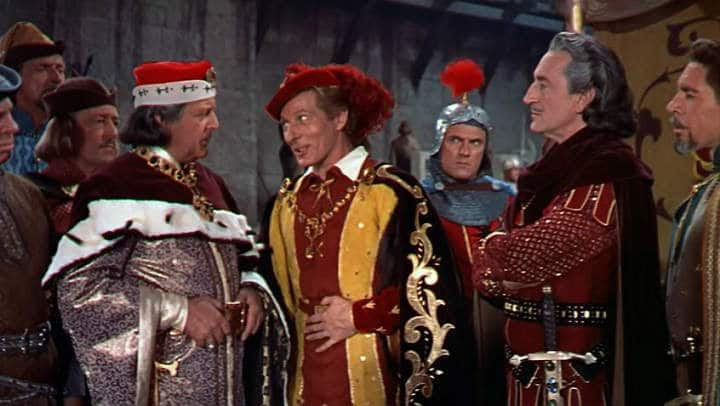 This is certainly an old-fashioned musical in the big sense. Kaye is on familiar ground here, having also starred in films like White Christmas and Hans Christian Anderson. He takes easily to swordplay and was famous for his ability to mimic. The songs are cheerful and catchy. I don’t generally like musicals but I enjoyed this one a great deal.

The costumes are colorful and suit the tone of the film perfectly. While they are in no way historically accurate, they are gorgeous. Besides, this film is set in a non-specific Hollywood Middle Ages that many similar films use, so accuracy isn’t all that important.

The roles of the female characters stood out as being surprisingly active for the time. It is also interesting that Jean is attracted to Hubert precisely because he is not a typical action hero but a kind and good man. This was an unusual stance for a film to take at the time. 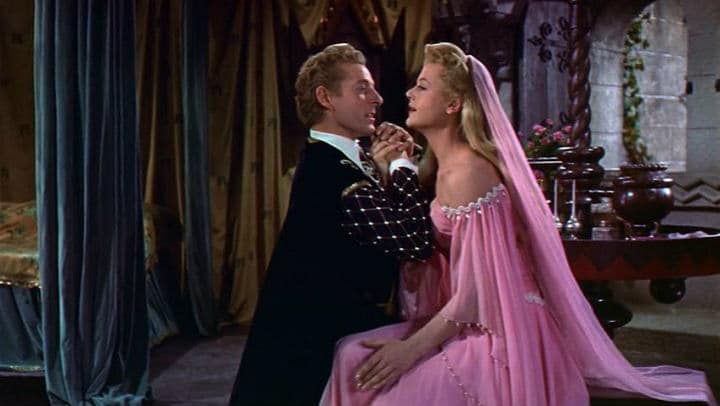 There is certainly romance in the film. First, there is the fondness between Hubert and his female Captain who has put aside her own happiness until the mission is successfully carried out. Then there is Princess Gwendolyn who dreams of marrying for love, whom Hubert romances, while under hypnosis.

The Court Jester is a fun film with action, romance, intrigue, comedy and great costumes. Fans of Princess Bride should definitely give it a go.

Where to Watch: The Court Jester is available on Netflix and can be bought to stream or on DVD at Amazon.