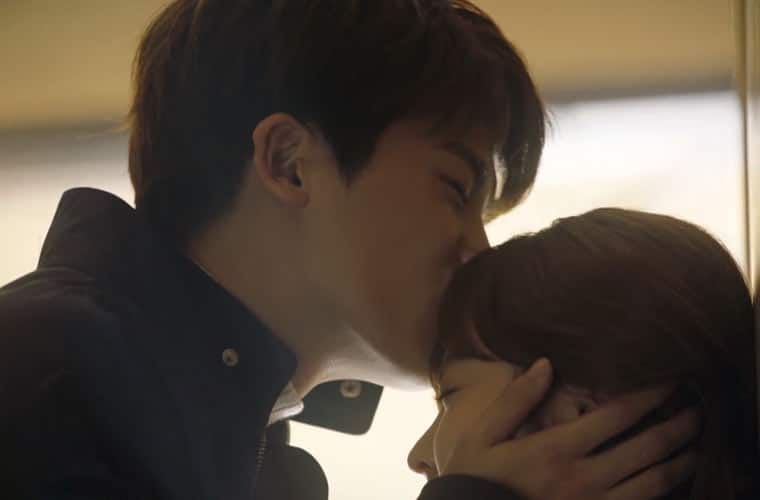 Swoon time! Min-Hyuk’s confession has opened the doors of Bong-Soon’s heart! Meanwhile, the kidnapper makes a big move. Can Bong-Soon stop him? 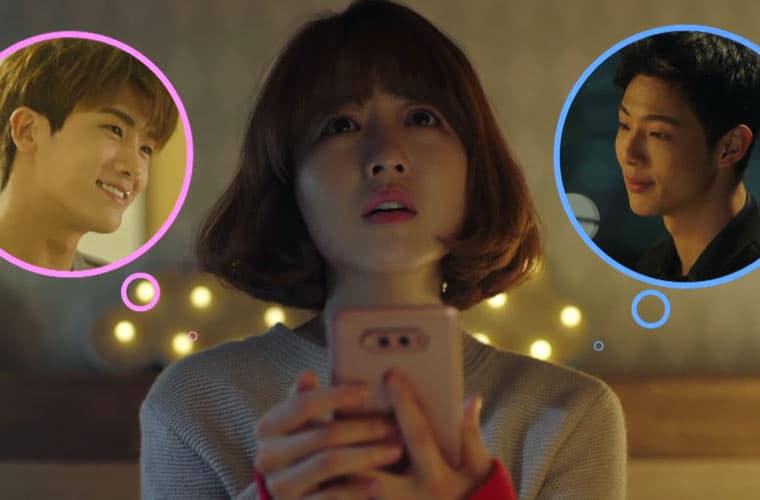 After Min-Hyuk’s sudden confession, Bong Soon is flustered. She tells him that she needs some time to think how she truly feels. Later on, she gets a text from Gook-Du and Min-Hyuk individually asking her to see a movie tomorrow night. What’s a girl to do!

At work, Bong Soon worries about the texts. Her manager, Cartilage, bosses her around and tells her to carry a load of heavy boxes in. She freaks him out when she carries them all at once to his office. Bong-Soon finally declines both movie offers, but accidentally mixes up the text messages, sending Gook-Du the one written formally (even though she talks to him informally because they’re childhood friends) and the informal text to Min-Hyuk (whom she talks to formally as her boss). But of course, Min-Hyuk thinks her bold informal speech is romantic, lol. 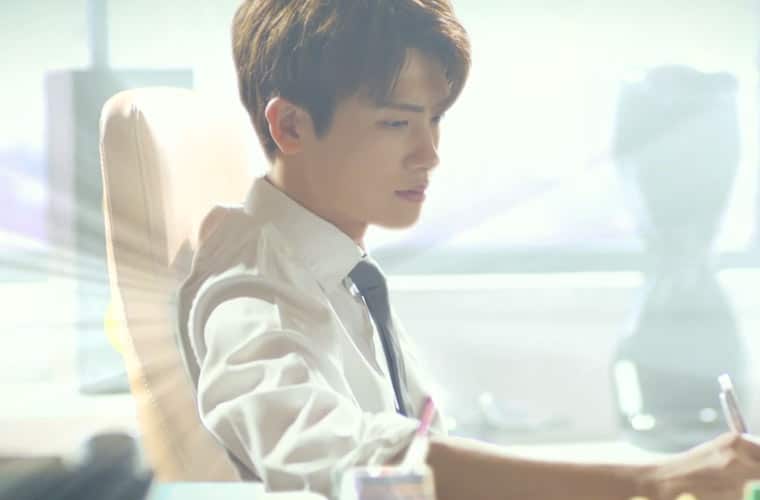 Gook-Du calls Bong-Soon and asks to see her after work. Cartilage demands to know how Bong-Soon is so strong. She tells him she’s an alien which freaks him out. Min-Hyuk arrives at the office and Bong-Soon sees him in a new light (literally). After looking at Bong-Soon’s character for her game idea, Min-Hyuk suggests they work on it together. He promises to help her become a full-fledged game developer which elates Bong-Soon.

Bong-Soon and Min-Hyuk eat lunch. Now it’s Bong-Soon who can’t keep her eyes off of Min-Hyuk. Cartilage tries to tell Min-Hyuk the shocking news that Bong-Soon is an alien! But Min-Hyuk and Bong-Soon are in another world, sharing food and gazing at each other adoringly.

Gook-Du arrives outside the office to meet with Bong-Soon, but his fellow cop calls him and tells him that Hee-Ji is in danger. (Apologizes! I misunderstood a scene from last week and thought the kidnapper had grabbed Hee-Ji but he hasn’t taken her yet). Gook-Du leaves immediately. Bong-Soon waits in the coffee shop a long time for Gook-Du. Min-Hyuk shows up. He knows she was waiting for Gook-Du. He offers her his hand and then envelops her in a hug. They leave and spend the evening out together. Gook-Du realizes that Bong-Soon is rejecting him

The police officers start surveilling Hee-Ji. They think that the psycho will try to nab her that night. But unbeknownst to them, he’s nabbed Kyung-Shim (Bong-Soon’s friend) instead.

Bong Soon and Min-Hyuk eat dinner together. He asks what they should call each other because he doesn’t like being called CEO all the time, haha.

Gook-Du and his fellow officers complain about how the baddie always seems to know what they’re doing. Gook-Du recalls the camera parts on the baddie’s table in his office when Gook-Du tried to beat him up. They search the office and Gook-Du finds the bug under their camera.

Bong-Soon texts her bestie, Kyung-Shim, to talk about Min-Hyuk. The baddie uses Kyung-Shim’s phone to pretend to be her friend. Bong-Soon innocuously reveals that if she hurts an innocent person she can lose her powers. Nooo, Bong-Soon! Don’t let him know! 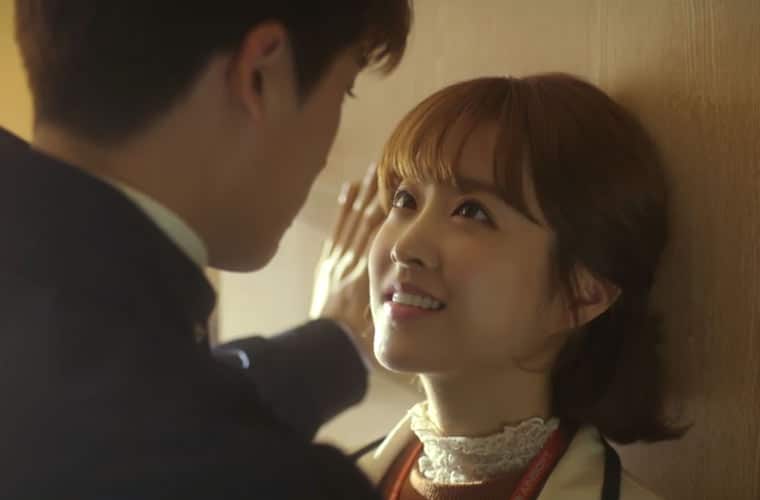 Min-Hyuk and Bong-Soon text each other goodnight. They nickname each other Bong-Bong and Mim-Mim. Min-Hyuk especially loves his new nickname. At work the next day, Bong-Soon searches for Min-Hyuk and finds him in an empty conference room. Taking advantage of the emptiness, Min-Hyuk asks her if she decided how she feels about him. But her smile says it all. He’s over the moon, raving about how adorable she is. He kisses her forehead. 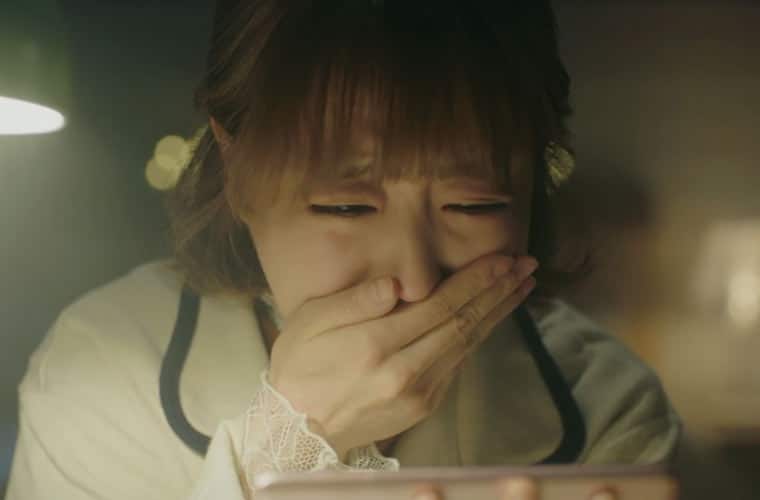 Bong-Soon sees her friend over the phone

Bong-Soon returns home, super happy. She texts Kyung-Shim, but when her friend doesn’t text her by her nickname, she realizes that it’s not her. She calls Gook-Du, who immediately searches for Kyung-Shim’s tracker (given by the police when she was attacked before). They realize she’s been taken. The baddie sends a frightening video to Bong-Soon of him striking Kyung-Shim and ordering her to leave the police out of this and come alone to save her. Shaking and unnerved, Bong-Soon runs to Min-Hyuk’s house. She begs him to help her…

The romance is in full swing and oh my word, it’s heavenly! Min-Hyuk’s candid adoration of Bong-Soon has been one of the best things about Strong Woman Do Bong Soon, so watching Bong-Soon feel the same way back makes me so, so happy!!

I loved Bong-Soon’s surprise when she began to see Min-Hyuk with light shining around him. Even she didn’t expect to be crushing this hard, haha (but how could she not??). Some of my favorite K-drama moments are just the sweet romantic moments between a couple in love and Strong Woman delivered with plenty of cute and adorableness. Just watching them gazing at each other while eating had me grinning.

Can I just rave about Min-Hyuk again?? It’s so hard not to when he’s such a rare rom-com lead. Don’t get me wrong, I love all sorts of characters, including the Mr. Rochesters and Darcys, but how refreshing is it to see a hero who adores and supports the heroine unabashedly? Not only does Min-Hyuk practically worship the floor Bong-Soon walks on, but he loves her for who she is. He wants her to succeed in her dreams and encourages her to go after her game developing ideas. When Bong-Soon asked if it was okay if they were together when she’s so different (super-strength) … his response is classic Min-Hyuk gold: why would that even matter? And the kiss! Even though we waited for 12 episodes, it was beautifully executed. I loved how Min-Hyuk asked Bong-Soon to take a step towards him this time after he had taken the initial step (his confession in episode 10) to bring them together.

I have to admit that the show feels increasingly like two different stories going on – one a cute, happy rom-com and the other a dark, disturbing mystery with lots of incompetent police officers (sorry, not sorry). Basically, the writers wanted to keep the baddie around this long, but there really hasn’t been enough story around him to warrant that. I’m crossing my fingers that now that he’s pushed Bong-Soon like this, they’ll finally have their showdown. I mean… I think most of us are tired of watching him senselessly beat up, starve and torment his victims! Of course, this leads into a major problem… that he knows Bong-Soon’s weakness! Be careful, Bong-Soon!

Who loved the kiss in this week’s episodes? Let me know your thoughts for Strong Woman Do Bong Soon in the comments!