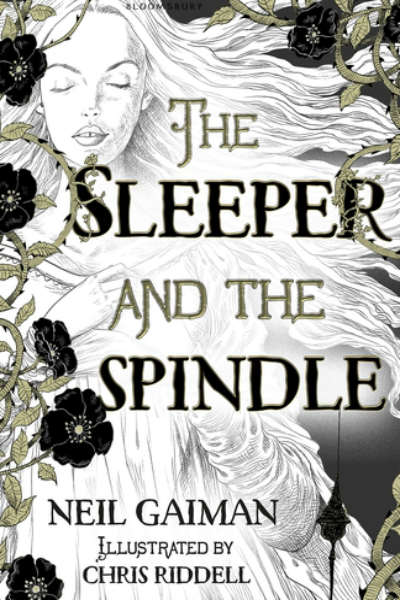 ‘It was the closest kingdom to the queen’s, as the crow flies, but not even the crows flew it . . .’

“You may think you know this story. There’s a young queen, about to be married. There are some good, brave, hardy dwarfs; a castle, shrouded in thorns; and a princess, cursed by a witch, so rumor has it, to sleep forever. But no one is waiting for a noble prince to appear on his trusty steed here. This fairy tale is spun with a thread of dark magic, which twists and turns and glints and shines. A queen might just prove herself a hero, if a princess needs rescuing…”

The Sleeper and the Spindle Review

This is how Neil Gaiman perceives The Sleeper and the Spindle as his retelling of the classic fairy tales of Snow White and Sleeping Beauty. It is a work that entices both the children and the adults.

Overall, the way Gaiman portrays Snow White and Sleeping Beauty against a re-fashioned backdrop are fascinating. The stories interwoven in the narrative canvas through their resurrection and reveal a spectrum of other fantastical innovations. The fusion of two tales establishes a kind of hierarchy in the treatment of characters. Certainly, Gaiman gives Snow White the upper hand.

Snow White’s struggle as a ‘Queen’ to rescue the hapless inmates of the castle and thereby save her kingdom from the sleeping plague makes her the perfect replacement of ‘Prince Charming’ in the fairy tale. This would raise pro-feminist voices and interpretations in the ‘modern’ context. However, there is much beyond the ‘feminist’ tagline.

Medieval Romance: Is it?

In tune with multiple discourses evoked by the text, Snow White’s journey from the exterior world towards and into the castle reminds me of the quest of knights that flourished in the medieval Romance tradition. In her journey, Snow White is like a chivalric knight who on the eve of her wedding travels from one fantastical world to the other driven by the quest to ‘rescue’ those who are helpless. The episode of the Queen’s expedition from the embracing thorns of the castle in the Forest of Acaire to the ‘rose’ and thereon the interior of the castle specifically is reminiscent of one of the most known Medieval Romances- The Romance of the Rose.

The Sleeper and the Spindle: A Graphic Tale

Besides this, the artwork of Chris Riddell in The Sleeper and the Spindle unfurls an amazing sequence of graphic depictions which lace the pages of the book. The text gets a gorgeous look in the intermingling shades of black, white and golden. The graphic detailing juggles with stasis and dynamism of the narrative which is noteworthy. In my opinion, Riddell dexterously carves out a ‘plagued’ world of sleep. The illustrations explain with utmost immediacy the plight of the sleepy world which echoes voices and stories from the ‘past’ in the grinding stasis of the ‘present’.

The Sleeper and the Spindle also yields to the gothic romance theme. The castle and the forest; the loneliness, antiquity and the ‘terrible beauty’ emanating from the ‘old’- all reminds me of Rebecca’s Manderley (Dame Daphne du Maurier’s Rebecca) which too is located on the cusp of the real and fantastical, old and the new, beautiful and the grotesque.

‘Now, the forest was a dense tangle, and the old paths through it were overgrown and forgotten.’

There is also much more to the tale which deserves a reading! What roles do the dwarfs and the witch play in Gaiman’s depiction? How do Snow White and Sleeping Beauty come to be rivals? What do they fight for? How does the ‘love’ for the ‘other’ win over everything? How does this retelling portray the ‘happily ever after’ conclusion of the traditional fairy tales?

Moreover, this being the time when rereadings of fairy tales are at a boom, this book surely deserves attention. Hence let’s keep an eye on all such reinventions to improvise our perceptions.

Content Note: There is a tinge of impending violence. However, The Sleeper and the Spindle is a delightful read.

Our romance-themed entertainment site is on a mission to help you find the best period dramas, romance movies, TV shows, and books. Other topics include Jane Austen, Classic Hollywood, TV Couples, Fairy Tales, Romantic Living, Romanticism, and more. We’re damsels not in distress fighting for the all-new optimistic Romantic Revolution. Join us and subscribe. For more information, see our About, Old-Fashioned Romance 101, Modern Romanticism 101, and Romantic Living 101.
Pin this article to read later! And make sure to follow us on Pinterest.
By Riti Agarwala on April 4th, 2017

Travelling, writing poems, reading, watching movies alongside a keen interest in weaving ideas into art (painting, sketching, origami) is what constitutes my story. Currently delving into the alleys of Animal Studies and reading into multifarious genres. 'Classics' and people's shifting perspective in reading them is something that has always intrigued me.

1 thought on “Neil Gaiman’s The Sleeper and the Spindle: Riddling With the Tradition”