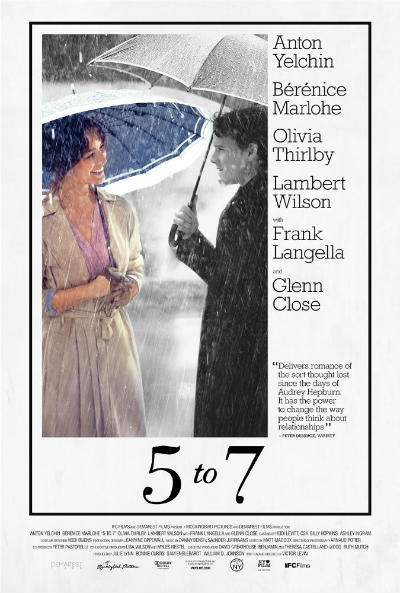 “In New York, you’re never more than 20 feet away from someone you know, or someone you’re meant to know.”

With this line, we meet the protagonist, Brian Bloom. He is a young aspiring writer played by Anton Yelchin. 5 to 7 is all the more moving and melancholy for the fact that this wonderful young actor is sadly no longer with us.

Going into this film, I wasn’t sure I would like it given the subject matter. Instead, what I found is a story about the journey of a young man becoming a writer with the help of an unusual but loving family that embraced him like one of their own. This film definitely felt like a romantic comedy with a philosophical touch to it. Such a film is hard to find nowadays.

The Star of the Show

Our hero is a romantic at heart. One that likes to live in his imagination rather than in reality. So the problem our main character faces is that he hasn’t lived through those major life-changing events. The ones that are often necessary for an aspiring writer to become a published one.

In fact, he is told the following at one point, which perfectly capsulizes where he is in his career:

“I can’t wait to read what you write when you’ve got something to write about. On that day, I’ll be honored to publish you.”

So we follow Brian Bloom as he goes through the growing pains of an author, learns that there is no one right way to love, and follows his muse to the pits of despair and heights of happiness.

Brian Bloom is so absorbed in his writing while drowning in rejection letters that he has forgotten to live and experience the little things in life. Enter Arielle, a French beauty with a mysterious and laid back allure that makes even our hero step outside of his comfort zone just to speak to her.

He becomes so swept up in the romance of the moment and dreams of their future together that when Arielle tells him that she is married with two children it is the last thing he expected. One can see his dream of a happily ever after with the woman of his dreams disappear in the blink of an eye. In normal circumstances, that would be the end of that story, but Arielle has an unusual marriage by our standards, to say the least. Both she and her husband have 5 to 7 relationships with people outside of their marriage.

Arielle explains this concept far better than I ever could:

“A 5 to 7 relationship is a relationship outside of marriage. … Back in the day, such things did tend to happen from 5 to 7, I think. These days they happen all the time, but my husband and I, we have found that the original hours work very well. They provide a set window and clear boundaries. I guess that makes us old-fashioned.”

So, what if you meet someone you feel you have been waiting your entire life to fall in love with and live happily ever after with, but this person wants to pursue a 5 to 7 relationship with you? I think it would be a struggle for most of us to get our heads around such a concept on any day. The limits and boundaries to such a love are also painfully clear.

What I do like though is that this is truly a relationship rather than a cheap affair. There are dates at the movies, in the park, at an art gallery and they even meet each other’s families. They seem like any other couple in love.

But can such a relationship even have a happy ending or a future of any kind? Maybe a happy ending is not something set in stone. We can forge our own paths and live simply to make memories in the now rather than always thinking about the future.

What I like about this film is that there is the assumption that most of the viewers will be bewildered by such an arrangement. The fact that our young hero is just as bewildered as the viewer by these circumstances makes him that much more relatable.

Just because somebody holds a certain belief does not mean we have to automatically jump onto that bandwagon with them. We get a look into such a lifestyle through Brian’s eyes as he essentially researches it before he decides whether this is a belief system he could truly get on board with or not.

He isn’t the only one struggling with acceptance, however. His parents have the classic silent reaction we would normally expect. Showing one’s girlfriend off to one’s parents has never been more awkward than this.

However, there is no point at which the husband and wife feel ashamed of their lifestyle. Because this is such a natural way of living for them, we as the audience find ourselves fascinated by it, as we would be by a different belief or religion. They are open and honest with each other about their relationships and think of their partners as an extension of their family. It’s simply a different way of life and thinking.

Why I Recommend It

This story serves as a reminder that there is an abundance of love in the world in all its many forms. We meet people so as to be influenced by them if we let them. Some will leave a stronger impression than others. But, ultimately, we will forever carry the memories with us and they can bring joy to the life ahead if we decide to look at them in a positive light.

The cast did a wonderful job of setting a soothing and kind atmosphere for us. The shots and classic tunes such as Le Ciel Dans Une Chambre and Le Temps de L’amour only served to highlight their seemingly effortless work.

There are films that leave you with a wonderful feeling of warmth and contentment. This was such a film for me. I left feeling very warm and overflowing with love. So, I invite you to share in this happiness with me by giving this story a chance despite its unusual premise.

“Put aside your notions about how people are. The world will surprise you with its grace if you let it.”

Content Note: This film is officially rated R in the US and I cannot fathom why.  In fact, the UK rating is 12. There is no strong language. There is only a hint at a love scene that happens off-screen.

Where to Watch: 5 to 7 is available to rent on Digital or buy on DVD. You can also stream on Amazon Video.

By Yaroslavna Simdyankina on March 31st, 2017