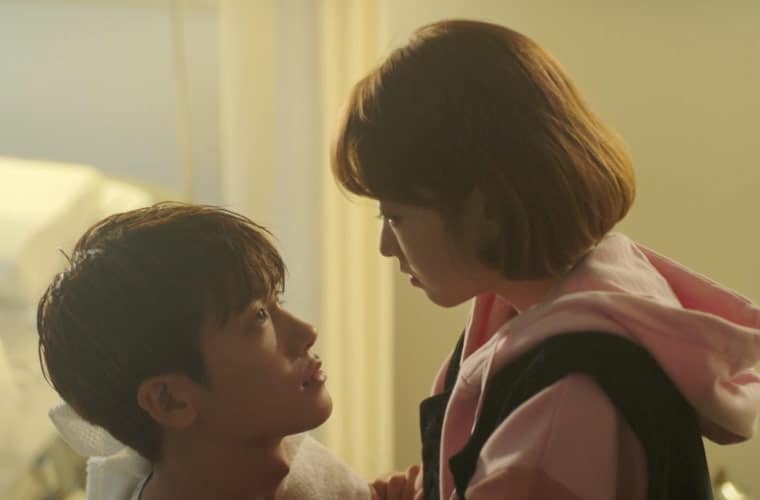 Get ready because feelings are finally coming out into the open! Bong-Soon continues to kick butt while Min-Hyuk captures hearts with his selfless love!

Bong-Soon faces down the gangsters fearlessly. Fighting them hand-to-hand, she thrashes them right and left using her powers and the fighting skills that Min-Hyuk taught her. Min-Hyuk and Gook-Du arrive in time to see her demolishing the last of the gangsters. Gook-Du is shocked. Meanwhile, a gangster tries to sneak up on Bong-Soon with a knife! Min-Hyuk and Gook-Du race towards her. He embraces Bong-Soon as the knife pierces his side.

Realizing that Min-Hyuk’s been stabbed, Bong-Soon cries. They rush him to the hospital. Luckily the wound wasn’t deep. Despite feeling okay, he fakes how much pain he’s in around Bong-Soon, clearly enjoying her concern for him.

Gook-Du puts all the pieces together of his past and recalls high school instances with Bong-Soon and what he now realizes was her super-strength. Min-Hyuk also realizes that he met Bong-Soon before, when she saved his bus from falling over a bridge when he was a teenager. 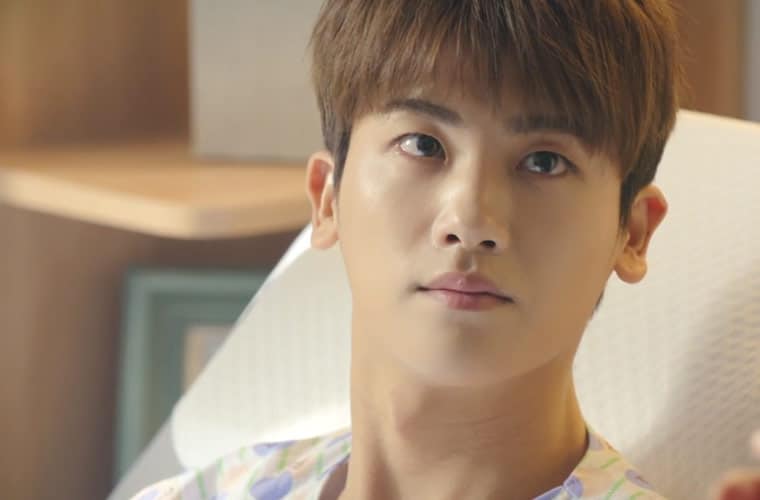 Min-Hyuk’s dad comes to the hospital but Dad and son have an emotional argument. Min-Hyuk doesn’t want his dad’s fake concern, while Dad doesn’t get why Min-Hyuk isn’t grateful for how he raised him in wealth. Meanwhile, Gook-Du discovers a previous witness (who’s actually the baddie!!) working in a car junkyard – right where most of the kidnapped girls’ disappeared.

Bong-Soon decides to stay overnight at the hospital to look after Min-Hyuk. While drying his hair, he takes hold of her hand. They stare into each other’s eyes. He leans in a bit and Bong-Soon closes her eyes. Several seconds go by before Min-Hyuk quietly says they should sleep now. But she closed her eyes, Min-Hyuk!

The kidnapper puts up a picture of Hee-Ji and Gook-Du on his wall. Omg, no woman is safe here!! Gook-Du shows up at the hospital to take Bong-Soon to the police office. Min-Hyuk begs Bong-Soon not to go, clearly worried about her safety, but Bong-Soon is set on going. At the station, Bong-Soon recognizes the witness’ voice is the kidnapper! They tell Gook-Du’s team, but apparently another culprit has confessed to the crimes!

Gook-Du rages at his fellow officers, knowing the real criminal is still on the loose. Bong-Soon decides to look into the culprit herself. Gook-Du can’t handle anymore. He shows up at the kidnapper’s junkyard and demands to know where the women are, even beating the kidnapper. However, he has no proof so the kidnapper just calls the police. No, this isn’t right!!!

Bong-Soon is on cloud nine when Min-Hyuk tells her she’s being moved to the planning department at Ainsoft. Her dreams of game designing are finally coming true! She dances her way into work. Then she learns that she’s still working with Min-Hyuk as an intern before she can be moved to the new team. She’s not too happy about that.

Gook-Du resigns at the police station for what he did. Then he goes back to the junkyard to beat up the baddie again. Fellow police officers show up and stop him. They believe Gook-Du’s hunch as well and promise to work together to stop the kidnapper.

Bong-Soon has another Romeo and Juliet dream, this time with Romeo/Min-Hyuk leaning in to kiss her! At work she does a double take after seeing a team leader who looks just like one of the gangsters she beat up. This team leader, nicknamed Cartilage, is something of a rude diva who yells at Bong-Soon for trying to climb the work ladder using Min-Hyuk. She remains patient for as long as she can, but after Cartilage pushes her around, she pins him in between a wall and a heavy table. Haha.

Bong-Soon stops outside Min-Hyuk’s office and hears him talk about why he took that knife for her. Min-Hyuk unexpectedly opens the door. They both look startled and Min-Hyuk clams up.

The psycho kidnaps Hee-Ji. Does he really want Gook-Du to kill him?? 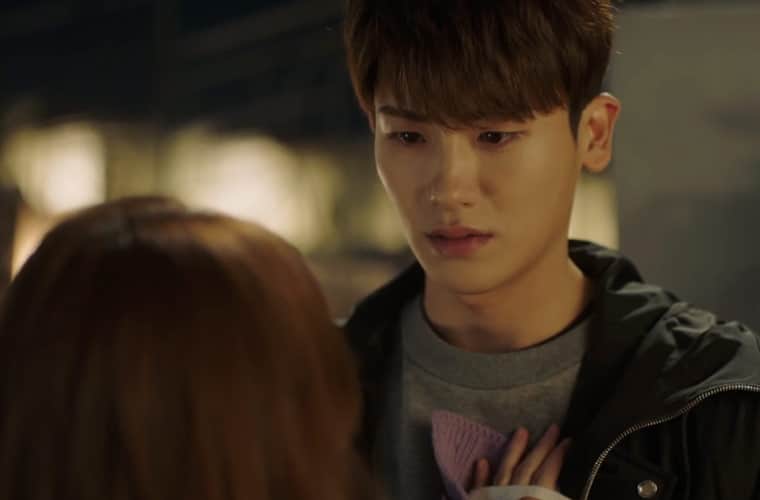 When asked about her feelings for Min-Hyuk, Bong-Soon admits to her friend that she feels confused around him. Her heart won’t stop pounding when she sees him. That night, Min-Hyuk suddenly comes to her house. He needs to tell her something. He’s sick. She laughs, saying she knows that. But he takes her hand and places it against his heart. No, he’s sick here. He says he likes her.

Finally! Bong-Soon can’t be confused about Min-Hyuk’s true intentions or the meaning behind his words anymore. It’s funny, but until now I’ve never really thought that Min-Hyuk was hesitant to share his feelings. He’s very open with his statements and most definitely his actions. He shows his admiration and interest in Bong-Soon all the time – his flirty jokes, training her, teasing her, even protecting her. 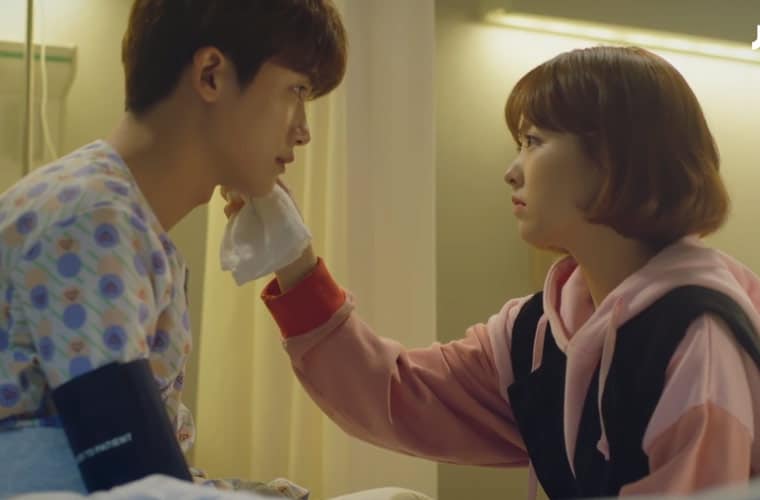 Taking the knife was the most obvious non-verbal confession of his feelings for Bong-Soon. She might’ve even figured it out earlier when he started confessing in the hospital how fortunate it was that he was hurt, not her. But per Min-Hyuk style, he quickly turned it into a joke. Which is really just his way of protecting his heart. While Min-Hyuk rarely waxes on about his painful past, we see how much it’s affected him just in his fight with his dad. He grew up in a loveless home. Just recently he learned that the only brother who was kind to him was secretly threatening him. Min-Hyuk’s nervous about putting himself out there (aren’t we all??). Even when Bong-Soon closed her eyes when the hair-drying moment turned romantic, he hesitated. Was he afraid that the timing was too early? That she still cared for Gook-Du and not him?

I’m glad to see that Gook-Du has finally figured out the identity of the psycho kidnapper. It’s still frustrating to see, though, that very few people support his hunch, forcing him to mainly work alone and try to take down the psycho himself. While punching the daylights out of the kidnapper isn’t likely to stop him… at least Gook-Du’s doing something (unlike other police officers, ahem). Honestly the kidnapper is soooo evil that I don’t care what Gook-Du does to him; I just want someone to stop him. I mean, he’s already got Hee-Ji! 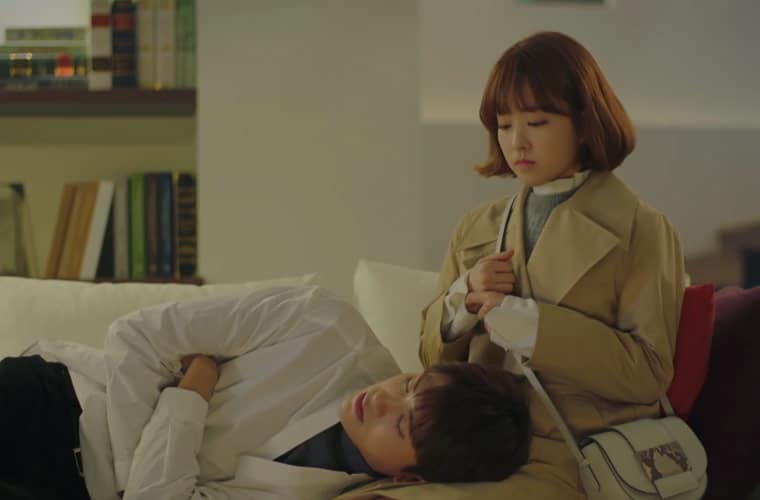 Can I say again how happy I am that Min-Hyuk confessed!? Seriously, taking that giant step forward to say his feelings aloud was just awesome! Hopefully Bong-Soon’s heart is getting stirred even more! She’s fallen for him more than she’s aware of yet. She worries about him, pretty much babies him, and even dreams about him – as her Romeo! Also, can they please kiss this time!

Anyone else think Min-Hyuk’s confession was just wonderful? Who else is hoping for a kiss soon! Let me know your thoughts for Strong Woman Do Bong Soon Episode 9 & 10 in the comments!

Our romance-themed entertainment site is on a mission to help you find the best period dramas, romance movies, TV shows, and books. Other topics include Jane Austen, Classic Hollywood, TV Couples, Fairy Tales, Romantic Living, Romanticism, and more. We’re damsels not in distress fighting for the all-new optimistic Romantic Revolution. Join us and subscribe. For more information, see our About, Old-Fashioned Romance 101, Modern Romanticism 101, and Romantic Living 101.
Pin this article to read later! And make sure to follow us on Pinterest.
By Faith White on March 28th, 2017