To Walk Invisible: The Brontë Sisters – A Bleak Yet Wonderful Biopic If you’re a fan of classic literature (and especially the literary genius of the Brontë sisters) or period dramas, you won’t want to miss the Sunday premiere of Sally Wainwright’s To Walk Invisible: The Brontë Sisters on PBS Masterpiece. The TV Movie brings you inside the world of the Brontë siblings as you’ve never seen before in a wonderful two-hour biographical drama.

Instead of focusing on the siblings’ entire lives, To Walk Invisible instead focuses on the three-year period when the three sisters (Emily, Anne, and Charlotte) begin to publish their stories and pursue their writing careers; not all of them willingly at first. Part of their decision is due to the financial problems of the family while the other is a natural desire/ambition to tell their stories. In the event of the death of their father, the Reverend Patrick Brontë, they don’t want to be without a way to support themselves especially since none of them have married. If you’re familiar with history, however, then you know that in a tragic twist of fate, their father outlived all of his children.

In To Walk Invisible, the three sisters each work on a book to publish and then smartly choose pseudonyms so no one will suspect they’re written by women. It’s a fascinating look and insight to how these three sisters produced some of the best books ever written in the English language. To name a few: Jane Eyre, Wuthering Heights, Agnes Grey, Villette, and The Tenant of Wildfell Hall.

Now, for those of you unfamiliar with the lives of the Brontës, you may be surprised to learn just how bleak and isolated their lives were. Their mother died, a couple of their siblings died tragically as children, and then ultimately, they all die young.

The most tragic fate, however, belongs to their brother, Branwell Brontë. As a child, he showed much promise and creativity like that of his sisters. And, as an adult, he longs to be an artist. His famous painting of his sisters did survive. But he ultimately grew into an alcoholic ruined by an affair with the older wife of his employer (much to his sisters’ horror) and participated in other untoward behaviors. This biopic does not tread lightly in its depiction of Branwell. He’s shown as vulgar, untrustworthy, difficult, and even mentally ill. With a realistic approach, Wainwright presents what it was likely like to live with Branwell, an addict who destroyed his life. And it’s not pretty.

Thoughts on the Production 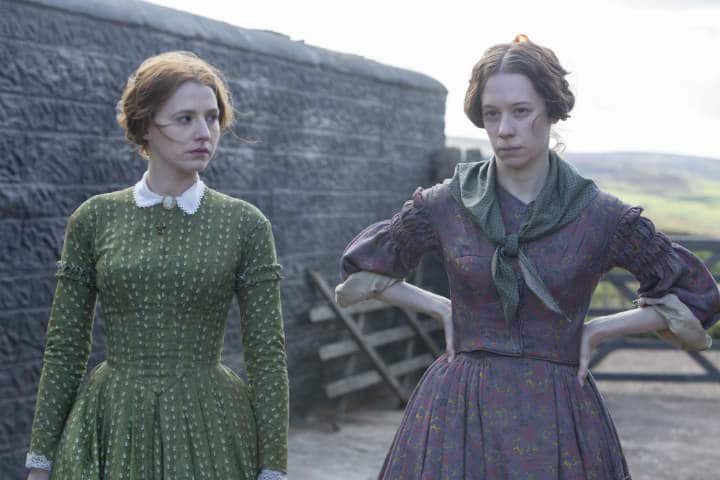 So, if you’re looking for a happy, romantic period drama to watch, you may want to look elsewhere. But if you love the Brontë sisters and want to know what their lives were really like, then this is a must-see film. The script and dialogue are fantastic, the production design and costumes are perfection, and the cinematography beautiful. Not to mention the emotional musical score.

I was especially impressed, however, by the casting and performances from the relatively unknown actors. The most famous name in the production is Jonathan Pryce as Patrick Brontë, their father. He, of course, does a brilliant job in the role. Then there is Finn Atkins as Charlotte, Chloe Pirrie as Emily, Charlie Murphy as Anne, and Adam Nagaitis as Branwell.

While each of them give honest, moving performances worthy of the Brontës, I particularly enjoyed Chloe Pirrie as Emily. She embodies the persona of Emily in a way not many would be capable of. Especially considering her intense and extremely private personality. 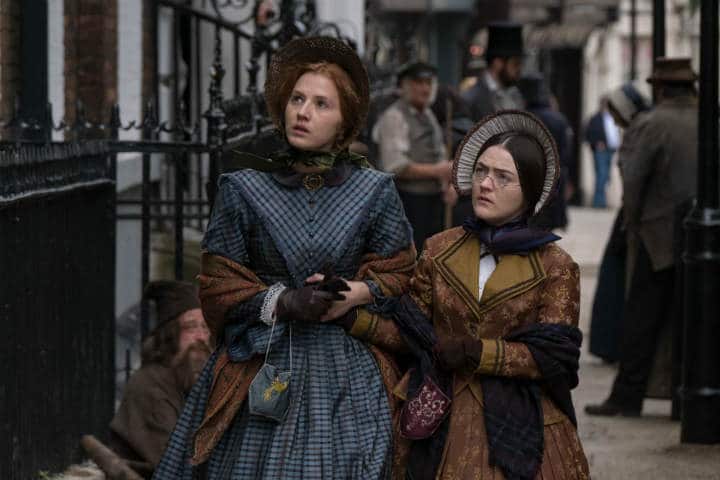 I was also impressed with Atkins who gives an impassioned performance as Charlotte. Fans of Jane Eyre will appreciate the scene when Charlotte goes to London to prove to her publisher, George Smith, that the books are, in fact, written by three different people, sisters to be exact. His disbelief at first that Charlotte could be Currer Bell sets off an emotional reaction in Charlotte akin to her character creation, Jane Eyre. The individuality and power in Jane’s speech to Rochester come flying out of Charlotte in this moment. Compare the two. Jane to Rochester:

“Do you think, because I am poor, obscure, plain and little, I am soulless and heartless? You think wrong! – I have as much soul as you, and full as much heart!”

In To Walk Invisible:

“What makes you doubt it Mr. Smith? My accent?” Charlotte asks leaving Mr. Smith dumbfounded. “My gender? My size?”

His face turns from surprise to truthful realization. No one other than Currer Bell could say these words and in such a determined, impassioned manner.

In a fun bit of trivia, George Smith and Charlotte ultimately grew close. And it’s commonly assumed (even by Smith) that the character of Graham Bretton in Villette is based on him. 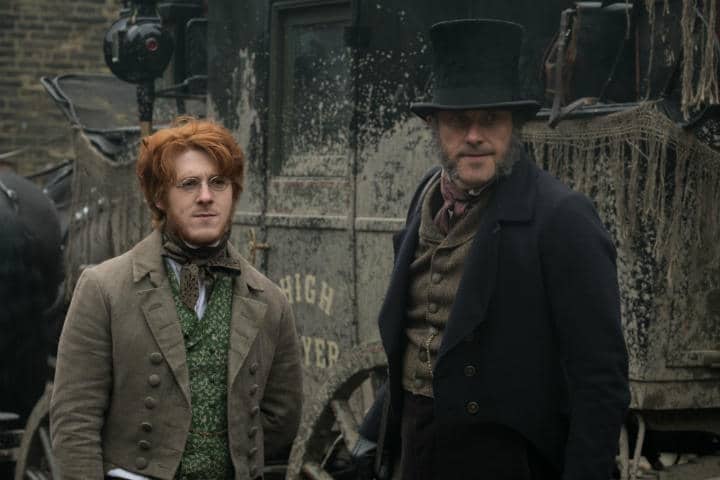 Now, while the film is a brilliant and well-researched production, there were a couple aspects I found unnecessary. Branwell may have been an addict with a vulgar personality but I don’t feel it was necessary to use profanity and an explicit sex scene to reveal this. His implied bad behavior is enough. The audience is smart enough to see how his addiction leads to his death. Now, I should be clear, that there are two versions of this film. 1. The original BBC production which aired in December. And 2. The edited PBS version that airs March 26, 2017.

RELATED Louisa May Alcott: The Woman Behind Little Women – A Documentary Masterpiece

In the original BBC presentation, there are a couple of scenes that use the “F” word. This has been cut from the PBS version. And as shown in the edited PBS presentation, the bad language proves wholly unnecessary. The profanity does nothing to add to the biopic and I felt detracted from the overall quality of what is a fantastic production. Wainwright may have gone with a gritty approach but some period drama or Brontë fans may not appreciate the explicit content. I certainly didn’t.

The sex scene, which is a hallucinatory dream from Branwell, is much more explicit than needed in a biopic about these famous sisters. Honestly, I’m not sure why it’s there other than to prove how “artistic” the film is because it’s modernized the old-fashioned Bronte sisters with vulgarity. Something I doubt the sisters would have approved of.

Still, the explicit moment is only one scene and not graphic enough to make it R-rated. The language in the British version is also not continuous throughout. So as a whole, it’s not excessively explicit. 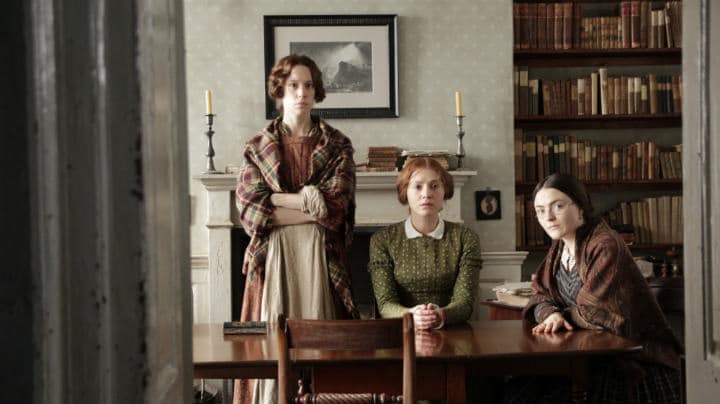 In all, To Walk Invisible is a wonderful biographical drama about some of the best writers who ever lived. And I can’t recommend it enough. Certainly, the plights of these women attempting to be successful writers in a male’s world are fascinating to watch. And without giving the ending away, I will say that I found the conclusion of the film incredibly moving in a surprising way. So, if you watch, prepare to have tissues.

Where to Watch: To Walk Invisible premieres on Sunday, March 26th, 2017 at 9/8c. The film will be available on DVD to purchase on April 11.

Content Note: The PBS version differs from the BBC original presentation. The movie that aired on the BBC includes brief strong language in a couple different scenes where Branwell uses the “F” word. However, the PBS version has cut out the bad language. So, just be aware of which version of the film you’re watching. In both versions, there is a sex scene which would make the rating TV-14 in the U.S. With the inclusion of the “F” words in a couple scenes, the original version would be TV-M. Overall, however, the production is not vulgar or continuously explicit. Most of the TV Movie feels PG.

Have you seen To Walk Invisible: The Brontë Sisters? Do you plan to watch? Share your thoughts on the production in the comments below!

277shares
We use cookies to ensure that we give you the best experience on our website. If you continue to use this site we will assume that you are happy with it.OkNoPrivacy policy